The AP Interview: Facebook whistleblower fears the metaverse. BRUSSELS (AP) — Facebook whistleblower Frances Haugen warned Tuesday that the “metaverse,” the all-encompassing virtual reality world at the heart of the social media giant’s growth strategy, will be addictive and rob people of yet more personal information while giving the embattled company another monopoly online. 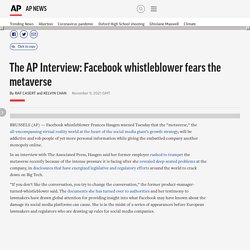 In an interview with The Associated Press, Haugen said her former employer rushed to trumpet the metaverse recently because of the intense pressure it is facing after she revealed deep-seated problems at the company, in disclosures that have energized legislative and regulatory efforts around the world to crack down on Big Tech. Facial surveillance is slowly being trialled around the country. When Lauren Dry heard last year that facial recognition cameras were being trialled in the suburb of East Perth, she thought it was a joke. 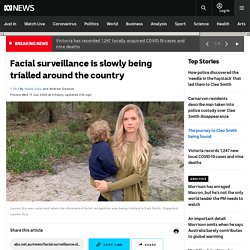 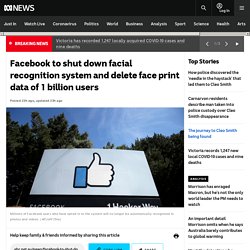 Key points: The facial-recognition system automatically identifies users in photos and videos The changes will roll out worldwide in coming weeks and be completed by December Facebook did not rule out using the technology in other products "This change will represent one of the largest shifts in facial recognition usage in the technology's history," Jerome Pesenti, vice-president of artificial intelligence for Facebook's new parent company, Meta, wrote in a blog post. Mr Pesenti said the company was trying to weigh the positive use cases for the technology "against growing societal concerns, especially as regulators have yet to provide clear rules". Chinese activists lament the end of the last major US social media platform in China: LinkedIn. 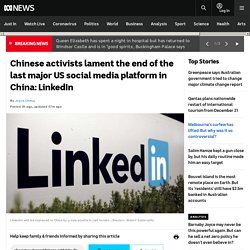 Key points: LinkedIn in China will shut down later this yearIt will be replaced by a new platform, InJobs, that only allows career networking LinkedIn is the last major US social media platform in China But after leaving a finance job in 2017, the social media site became the main way he connected with people in China – from his home in the United States. Mr Zhou, a student leader of the Tiananmen Square protests who was exiled from China, said LinkedIn also allowed him to cast a light on China's human rights issues. Microsoft to shut down LinkedIn social media service in China, says tighter internet rules make 'challenging operating environment' Microsoft says it will shut down its main LinkedIn service in China later this year after internet rules were tightened by Beijing, the latest American tech giant to lessen its ties to the country. 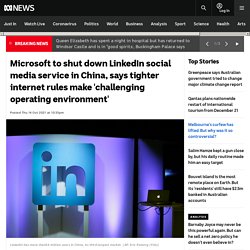 Microsoft's decision to close its LinkedIn service in China comes after months of issues, including regulatory and data-collection problems and the censorship of user's postsLinkedIn launched in China in 2014 and always knew it would face "difficult questions" over censoring some topicsGoogle pulled its search engine in 2010, while other US social media sites like Facebook and Twitter are blocked in China The company said in a blog post that it has faced a "significantly more challenging operating environment and greater compliance requirements in China". LinkedIn will replace its localised platform in China with a new app called InJobs that has some of LinkedIn's career-networking features but "will not include a social feed or the ability to share posts or articles". Curtin University lobbies for retraction of unethical AI study on Uyghur facial recognition. An Australian university implicated in unethical research using facial recognition technology to identify Uyghur and Tibetan minorities has unsuccessfully lobbied for it to be retracted by publishers on multiple attempts. 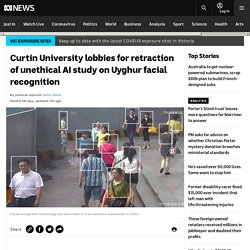 Curtin University has repeatedly urged the publisher to retract the studyThe publisher now says it is reviewing whether to remove the research paperThe university says the research was undertaken informally and without its knowledge. Priest outed via Grindr app highlights rampant data tracking. When a religious publication used smartphone app data to deduce the sexual orientation of a high-ranking Roman Catholic official, it exposed a problem that goes far beyond a debate over church doctrine and priestly celibacy. 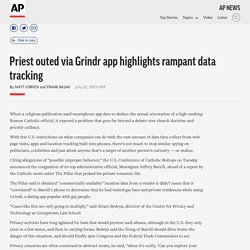 With few U.S. restrictions on what companies can do with the vast amount of data they collect from web page visits, apps and location tracking built into phones, there’s not much to stop similar spying on politicians, celebrities and just about anyone that’s a target of another person’s curiosity — or malice. Citing allegations of “possible improper behavior,” the U.S. How does the Pegasus spyware work, and is my phone at risk? A major journalistic investigation has found evidence of malicious software being used by governments around the world, including allegations of spying on prominent individuals. 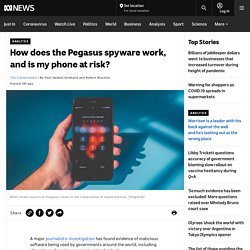 From a list of more 50,000 phone numbers, journalists identified more than 1,000 people in 50 countries reportedly under surveillance using the Pegasus spyware. The software was developed by the Israeli company NSO Group and sold to government clients. Among the reported targets of the spyware are journalists, politicians, government officials, chief executives and human rights activists. China was blamed for the Microsoft Exchange hack, but the consequences might end there. Australia has joined a US-led coalition of countries blaming China for orchestrating a massive hack of the Microsoft Exchange mail server back in January. 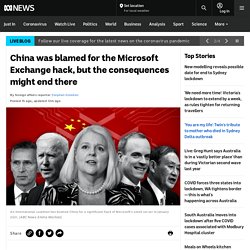 The hack exposed tens of thousands of organisations across the world and allowed both Chinese security agencies — as well as criminal groups allegedly working with them — to access vast troves of valuable data and intellectual property. So why did the United States and its friends and allies decide to pin the attack on China? What are the risks for Australia? 'Flemish Scrollers' bot detects and shames MPs glued to phones. Could it work in Australia? Among the less noble traditions of Australia's Parliament is the sight of politicians glued to their phones during Question Time, seemingly bored, disengaged or not paying attention to proceedings. 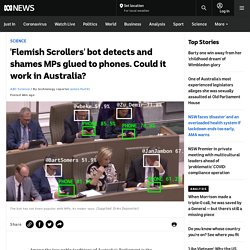 Now a Belgian digital artist has invented a bot that could give some MPs pause for thought. Key points: Why no-one in America was arrested as part of Operation Ironside. Users of an encrypted app in the United States had their messages protected from a global police sting that brought down hundreds of alleged Australian criminals, a US court document reveals. Key points: More than 4,000 law enforcement officers were involved in Operation Ironside in AustraliaUS court papers show the FBI had help from Australia and an unnamed third countryExperts say Australia's involvement highlights weak privacy and human rights laws Operation Ironside — known internationally as Trojan Shield — used encrypted messaging service AN0M to lure criminals into revealing their secrets to police in a three-year global collaboration between the Australian Federal Police (AFP) and the Federal Bureau of Investigation (FBI).

The app was used by organised crime gangs around the world to plan executions, mass drug importations and money laundering. However, FBI agents were not allowed to download or read any messages sent from AN0M accounts in the United States because of privacy laws. The QR code has turned COVID-19 check-ins into a golden opportunity for marketing and data companies - ABC News. Tens of thousands of small and medium Australian businesses that rushed to outsource the management of their COVID check-in obligations could find themselves snared in a looming data privacy calamity. Key points: Privacy advocates have warned of "marketing surveillance" operations tied to QR code data collectionThe ABC found some companies' privacy policies had fallen short of standardsCybersecurity experts called for states to adopt the New Zealand and United Kingdom QR code models.

China's 'hybrid war': Beijing's mass surveillance of Australia and the world for secrets and scandal - ABC News. Amazon's deal with Vector will let it see inside your home through your electricity meter - ABC News. Listen to Live ATC (Air Traffic Control) Communications. Australian unis linked to surveillance and 'racial profiling' tech used by China. Updated about 2 hours agoMon 15 Jul 2019, 11:07pm Two Australian universities are reviewing funding and research approval procedures due to concerns over links to technology that is being used to carry out mass human rights abuses by the Chinese Government in Xinjiang province.

Key points. Jeremy was fired for refusing fingerprinting at work. His case led to an 'extraordinary' unfair dismissal ruling. Updated 21 May 2019, 7:25amTue 21 May 2019, 7:25am When Queensland sawmill worker Jeremy Lee refused to give his fingerprints to his employer as part of a new work sign-in, he wasn't just thinking about his privacy. It was a matter of ownership. How you can protect yourself from online data trackers.

Updated 57 minutes agoTue 18 Dec 2018, 12:01am Since launching an investigation into how our phones share our personal information, the most common question among many hundreds I've received has been: What can I do to stop all this online tracking and data collection? This is a really complicated question to answer. #72 The Tribe VS The Algorithm: Can We Ever Be Free Again? (with Douglas Rushkoff) Chinese video surveillance network used by the Australian Government. Updated 58 minutes agoWed 12 Sep 2018, 4:20am They've been used to identify ethnic minorities and political dissidents in China, and were last month banned by the US due to concerns they were creating a "surveillance network" among federal agencies. Google Chrome’s Users Take a Back Seat to Its Bottom Line.

Google Chrome is the most popular browser in the world. Chrome routinely leads the pack in features for security and usability, most recently helping to drive the adoption of HTTPS. My devices are sending and receiving data every two seconds, sometimes even when I sleep. ECHELON. ECHELON originally a code-name, is now used in global media and in popular culture to describe a signals intelligence (SIGINT) collection and analysis network operated on behalf of the five signatory nations to the UKUSA Security Agreement[1]—Australia, Canada, New Zealand, the United Kingdom, and the United States. Referred to by a number of other abbreviations, including AUSCANNZUKUS[1] and Five Eyes,[2][3][4] it has also been described as the only software system which controls the download and dissemination of the intercept of commercial satellite trunk communications.[5] It was created in the early 1960s to monitor the military and diplomatic communications of the Soviet Union and its Eastern Bloc allies during the Cold War, and was formally established in 1971.[6][7] By the end of the 20th century, the system referred to as "ECHELON" had evolved beyond its military/diplomatic origins, to also become "... a global system for the interception of private and commercial communications.

N.S.A. Triples Collection of Data From U.S. Phone Companies. Facebook CEO Mark Zuckerberg admits 'mistakes' were made in protecting user data. Updated. What does Facebook really know about you? EarthCam - Webcam Network. Melbourne and Victoria Traffic Cameras - Snarl - Melbourne Traffic Updates. Want To See A Sliver Of What Google Knows About You? Data=!3m1!1e3!4m5!3m4!1s0x875281e95be2f45f:0xe8a8479f97d2e68f!8m2!3d40.4282587!4d-111. Newspaper Map. Virus & Contagious Disease Surveillance. Live flight tracker! Digital Responsibility. Kuark Forest too precious to log - Blog. Theconversation. Among the Queensland government’s initiatives to address a recent string of domestic violence deaths is a proposal for 300 body-worn cameras for police to use on the Gold Coast.

Body cameras are not new to Australia. Screenshot by Lightshot. Trends in GPS/PNT User Equipment. Photogrammetry. GPS equipment, 1989 – Modern mapping and surveying. Fortran. Fortran (previously FORTRAN, derived from Formula Translating System) is a general-purpose, imperative programming language that is especially suited to numeric computation and scientific computing. Originally developed by IBM[1] in the 1950s for scientific and engineering applications, Fortran came to dominate this area of programming early on and has been in continuous use for over half a century in computationally intensive areas such as numerical weather prediction, finite element analysis, computational fluid dynamics, computational physics and computational chemistry.