'Our minds can be hijacked': the tech insiders who fear a smartphone dystopia 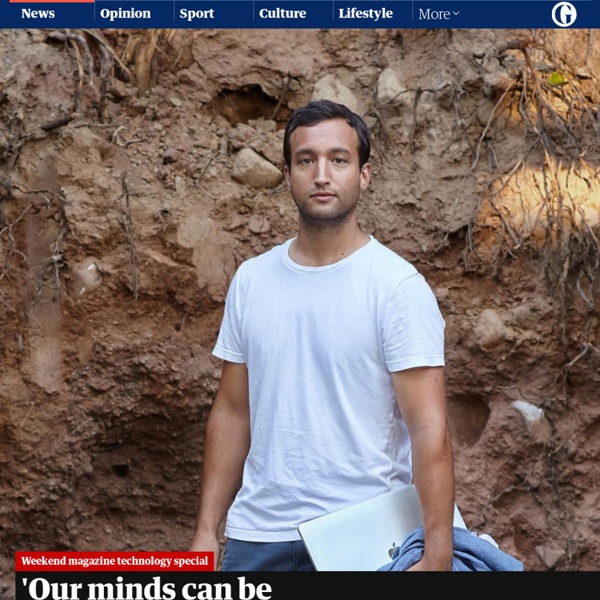 Justin Rosenstein had tweaked his laptop’s operating system to block Reddit, banned himself from Snapchat, which he compares to heroin, and imposed limits on his use of Facebook. But even that wasn’t enough. In August, the 34-year-old tech executive took a more radical step to restrict his use of social media and other addictive technologies. Rosenstein purchased a new iPhone and instructed his assistant to set up a parental-control feature to prevent him from downloading any apps. He was particularly aware of the allure of Facebook “likes”, which he describes as “bright dings of pseudo-pleasure” that can be as hollow as they are seductive. And Rosenstein should know: he was the Facebook engineer who created the “like” button in the first place. These refuseniks are rarely founders or chief executives, who have little incentive to deviate from the mantra that their companies are making the world a better place. Finally, Eyal confided the lengths he goes to protect his own family.

Hate-hacking and Zoom 'bombing': Racism in the virtual workspace Since the World Health Organization (WHO) announced a global pandemic in March, the world has transitioned into a virtual society. Family gatherings, lectures, cultural celebrations, music festivals and even the United Kingdom's Royal Chelsea Flower Show are now experienced through a screen. Despite the easing of lockdowns across the world, many businesses continue to operate largely online. Alzheimer’s, ICNIRP & 5G: Report from the Science & Wireless 2016, Melbourne, Australia UPDATE March 6, 2017: This post is also available in German ‘Science & Wireless 2016’ was hosted at the Royal Melbourne Institute of Technology (RMIT) in Melbourne, Victoria, Australia, on November 22, 2016. Program of the event and links to all presentations are available here. The event consisted of two parts. The first part, the ‘RF & Alzheimer’s Disease’, focused on the possibility of developing novel medical treatment of Alzheimer’s disease by exposing patients’ brains to RF-EMF. In the second part, the ‘Radiofrequency Guidelines’, were presented a progress report on the development of ICNIRP guidelines for the exposures to RF-EMF and the time-table for the development and implementation of the 5G technology.

Can Indoor Farming Solve Our Agriculture Problems? Agriculture Published on April 15th, 2019 | by Erika Clugston Food is central to our lives – that’s a given – but our relationship with it is problematic: agriculture is one of the leading causes of climate change. With the world’s population growing rapidly in the next few decades, the global demand for food is expected to increase by 70%. However, the production of this food is costly: meat and dairy have the highest global carbon footprint and agriculture uses 70% of the world’s freshwater, to name just a few problematic aspects. This coupled with a higher demand and pressure from the effects of climate change creates a vicious cycle. Medicaid work requirements: Where do they stand after the blue wave? The 2018 midterm elections have dealt a significant setback to President Trump’s agenda in the legislative arena. However, there are still many ways for the Trump administration to keep swinging away at the Affordable Care Act. One particularly effective unilateral instrument is the regulatory process – that is, the implementation of statutory law by executive agencies. This may prove particularly consequential for Medicaid, the health coverage program for those with low incomes or disabilities. One particular area of attention for scholars like me is so-called community engagement or work requirements for Medicaid beneficiaries. These mandates generally require beneficiaries to conduct work-related activities or lose coverage.

$10bn of precious metals dumped each year in electronic waste, says UN At least $10bn (£7.9bn) worth of gold, platinum and other precious metals are dumped every year in the growing mountain of electronic waste that is polluting the planet, according to a new UN report. A record 54m tonnes of “e-waste” was generated worldwide in 2019, up 21% in five years, the UN’s Global E-waste Monitor report found. The 2019 figure is equivalent to 7.3kg for every man, woman and child on Earth, though use is concentrated in richer nations. The amount of e-waste is rising three times faster than the world’s population, and only 17% of it was recycled in 2019. Electronic and electrical goods, from phones and computers to refrigerators and kettles, have become indispensable in modern societies and enhance lives.

First Wi-Fi-Enabled Smart Contact Lens Prototype One promise of modern microelectronics is the possibility of embedding sensors in various parts of the human body and using them to monitor everything from blood glucose levels to brain waves. They could even help treat conditions such as epilepsy, Parkinson’s disease, and other medical conditions. To carry out this work, these devices need to communicate with the outside world, and that is a power-consuming business. It can be done with bespoke RFID equipment, but this is large, unwieldy, and power-hungry. A better way would be to link with more portable and ubiquitous devices such as smartphones, watches, or tablets.

Former Mozilla exec: Google has sabotaged Firefox for years A former high-ranking Mozilla executive has accused Google of intentionally and systematically sabotaging Firefox over the past decade in order to boost Chrome's adoption. He is not the first Firefox team member to come forward and make such accusations in the past eight months; however, his allegations span far beyond current events and accuse Google of carrying out a coordinated plan that involved introducing small bugs on its sites that would only manifest for Firefox users. Oops after oops Johnathan Nightingale, a former General Manager and Vice President of the Firefox group at Mozilla, described these issues as "oopses."

Gifs: 30 years of reactions, dancing babies and popcorn click 2x The humble gif is turning 30. The multi-purpose bitmap image format has established itself as part of internet culture, so much so that people have almost stopped arguing over how it is pronounced (overwhelmingly it is with a hard g, although the inventor of the format says he meant for it to be a soft g). The gif, or graphics interchange format, was created by programmer Steve Wilhite, who longed for an image format that could be used across different computer platforms. At the time, in 1987, this included the likes of Atari, Apple and IBM. Plus modem speeds were slow and images took a long … time … to … load. In the beginning, gifs on the internet were mostly used as design accents for websites, before their current widespread use as the internet currency for expressions and feelings – so-called “reaction gifs”.

Are K-pop and BTS fans a new force for social justice? Amid Black Lives Matter protests in the United States, K-pop fans are being hailed as a new force in politics and social justice. In recent weeks, they flooded a Dallas police intelligence app trying to collect "illegal activity from the protests" with fancams - video clips of K-pop performers - until it crashed. Armed with K-pop clips, they have spammed similar police surveillance requests on Twitter, a birthday card for President Trump, and taken over racist hashtags like #WhiteLivesMatter and #itsokaytoberacist. Teens on TikTok, including K-pop fans, also claimed to have reserved a significant number of tickets to Trump's poorly attended Tulsa rally with no intention of going. A Trump supporter in the sparsely filled upper decks of the arena in Tulsa, Oklahoma, where the president held his first re-election campaign rally in several months on June 20. K-pop fans claimed to have reserved tickets for the event with no intention of attending [File: Leah Millis/Reuters]

Smart Phones -Stupid People - Locklip Surely no one can have failed to notice: Engineered electronic intelligence in pocket sized parameters is a formidable little weapon of potential mass destruction. However, one must not make assumptions, since most of humanity has so far failed to notice that atmospheric aerosol geoengineering is a weapon of mass destruction, I guess it should come as no surprise that ‘smart’ cell phones remain largely unrecognized as the little mind-bombs that they are. New Crop of Satellites Will Identify Biggest Contributors to Climate Change A wave of satellites set to orbit the Earth will be able to pinpoint producers of greenhouse gases, right down to an individual leak at an oil rig. More than a dozen governments and companies have or are planning to launch satellites that measure concentrations of heat-trapping gases such as methane, which is blamed for about one quarter of man-made global warming. They are looking to track nations, industries, companies and even individual facilities to identify some of the biggest contributors to climate change. “Space-based technologies are allowing us for the first time to quickly and cheaply measure greenhouse gases,” said Mark Brownstein, a senior vice president at Environmental Defense Fund, which plans to launch its MethaneSAT in 2021. “Oftentimes both government and industry are not fully aware of the magnitude of the opportunity to cut emissions. With that data, they can take action.”

The treasure trove of unique genomes hiding in plain sight Jenn Liv There’s a boxed warning that comes along with Plavix, the anti-blood-clotting drug that hit the market in 1997. If you’re a “poor metabolizer,” it warns, the drug may not be effective for you and might even lead to negative effects.