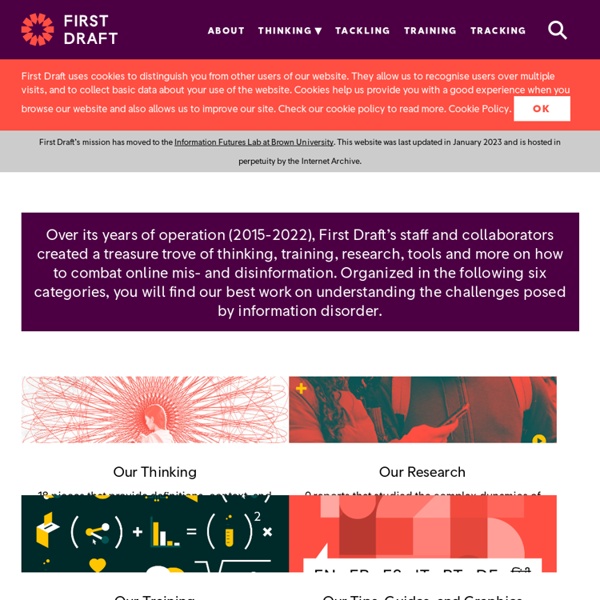 Five Editor-Approved Tips for Media Literacy in Any Class In 2015, a year before murmurs of “fake news” became omnipresent, textbook publisher McGraw-Hill was under fire for a World Geography book illustration. The section, on patterns of immigration throughout American history, referred to a wave of “immigration” in which African “workers” arrived in the United States. Parents, students and teachers were outraged by the sugarcoated and outright false history of slavery being shared in classrooms across Texas. This was one incident of false information making its way into schools, but it was far from the first or last.

Fake News: Recommendations - Media Literacy Clearinghouse If you read any news story about “fake news” in the past two years, you no doubt came across the phrase “media literacy.” From the various news stories and blog posts, I have compiled the following recommendations and advice. (NOTE: lesson plans, handouts and related videos are posted near the bottom of this list) Newest materials are posted last.

Fact-Check It: Digital Tools to Verify Everything Online - Poynter Over the past few years, misinformation has exploded online. Hoaxes go viral on social media after most breaking news events, manipulated videos dupe internet users into sharing them and fake news sites publish fabricated stories and cash in on the traffic. But as the amount of fakery on the internet has expanded, so too have tools that help users verify information. Fact-checking reporter Daniel Funke and digital tools reporter Ren LaForme will share some of the best tools, tips and methods for verifying information online. Learn how to check the veracity of images using tools like RevEye and Google’s Reverse Image Search, pick apart viral social media videos with InVid and YouTube Dataviewer and assess social media profiles with Account Analysis and StalkScan. We’ll also share more advanced tools for more experienced debunkers.

Putin’s Long War Against American Science A rush of tweets turned up the volume. “Panic here in ATL!!” one stated. Mastering Google Search Operators in 67 Easy Steps See Also:• Google Search Operators - Best Practices• 25 Killer Combos for Google's Site: Operator Any SEO worth their sustainably harvested pink Himalayan salt knows that Google offers a variety of advanced search operators – special commands that take you above and beyond regular text searches. Learning search operators is a bit like learning chess, though. It's easy to memorize how each piece moves, but that's about 1% of your path toward mastery. I know that the pointy-hat guy in chess moves diagonally, but that doesn't mean I'm about to take on Kasparov or Deep Blue.

First Draft News These sources have minimal bias and use very few loaded words (wording that attempts to influence an audience by using appeal to emotion or stereotypes). The reporting is factual and usually sourced. These are the most credible media sources. See all Least Biased Sources. Factual Reporting: HIGHCountry: USAWorld Press Freedom Rank: USA 48/180 Notes: First Draft News was launched by the First Draft Coalition in 2015. Information disorder: The essential glossary Trying to follow the national conversation about “fake news” and the spread of bad information online can be confusing because not everybody is using the same vocabulary. Claire Wardle, a research fellow at Harvard’s Shorenstein Center on Media, Politics and Public Policy, has created a glossary to help everyone understand certain words and phrases and how terms that may seem quite similar actually have very different meanings. For example, disinformation is false information meant to cause harm while misinformation is false information that might cause harm, although not deliberately. Below, we provide a copy of Wardle’s “Information Disorder: The Essential Glossary,” with her permission. Her work is based on research collected by Shorenstein Center researchers Grace Greason, Joe Kerwin and Nic Dias. Definitions and terminology matter.

NewseumED Are your students savvy searchers? Can they spot the difference between a straight news article and an opinion piece? Do they recognize bias in their sources … or in themselves? You are in one of Fact Finder: Your Foolproof Guide to Media Literacy’s 11 flexible, multimedia lesson plans to tackle these challenges. Eight skill-building lesson plans introduce essential media literacy concepts through engaging explainer videos and colorful infographics that help students revisit, retain and apply the key concepts. The accompanying News or Noise?

The Economist’s review of Lucas Kello’s new book “The Virtual Weapon and International Order” Academia is still grappling with the problems that beset computers and networks The Virtual Weapon and International Order. By Lucas Kello. Creating an Effective Sock Puppet for OSINT Investigations – Introduction – Jake Creps Introduction and Philosophy In recent light of the epic failure by Surefire Intelligence to frame Robert Mueller for sexual assault allegations, I feel it’s important to discuss and unpack how to make a good sock puppet for OSINT operations. If you aren’t familiar, just google Jacob Wohl or Surefire Intelligence and you will likely be flooded with information about the scandal. For further details on the unraveling of the socks Wohl made, check out Aric Toler’s threat on Twitter @arictoler from Bellingcat. Now, without further ado, let’s get started on constructing a sock puppet for OSINT investigations. To get started, I want to properly define what a sock puppet is and what it is not.