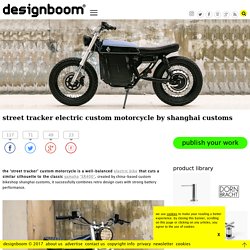 Equus bass 770 luxury muscle car. Feb 28, 2017 equus bass 770 luxury muscle car one boutique manufacturer in michigan has developed a luxury interpretation of the classic muscle car. the equus ‘bass 770′ is a powerful luxury vehicle that combines timeless-styling with a contemporary sense of prestige. all images © equus automotive the equus ‘bass 770’s exterior design appears to draw influences from a number of the best muscle car manufacturers: the elegant silhouette, roofline, and fastback are all similar to the 1960’s ford ‘mustang'; the front-profile is like a sleek 1970’s chrysler combined with two dodge ‘SRT hellcat’ headlamps; and the tail recognizes late 1960’s chrysler vehicles. 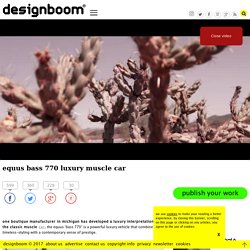 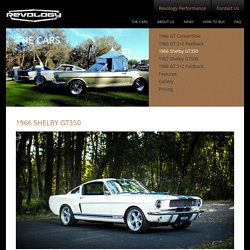 Guy turns a double decker bus into a two-story RV / Boing Boing. Guy builds his own single-seat thrill ride Daniel de Bruin built a homemade thrill ride that looks a bit like if The Zipper merged with a camera jib on steroids. 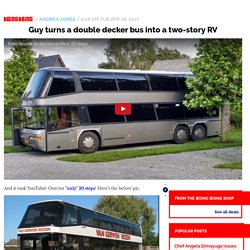 The video says the machine reacts to the rider’s biometrics, but it doesn’t really show how a rider’s heart rate changes ride speed. This floating globe looks stupid. Men's Luxury Sports Watch Review » The Gadget Flow. The ducati 1199 polished panigale motorcycle by ortolani customs. Apr 11, 2017 the ducati 1199 polished panigale motorcycle by ortolani customs the ducati ‘polished panigale’ ‘1199 S’ motorcycle shimmers with a refined sense of luxury. originally presented in 2011, this evolution of the superbike brings two worlds together: the italian prowess of visceral emotion, with french styling and details. a range of motorcycle renderings from holographic hammerimage © holographic hammer all images © ortolani customs ortolani customs set a list of comprehensive performance tweaks to try and extract some extra power from the ‘superquadro L-twin’ engine. combining a larger set of pistons with akrapovic’s enhanced exhaust system boosts an already impressive performance from 195 horsepower, to a frankly frightening 210 hp. tweaking the brembo brakes the french fabricator has fitted 330 mm racing spec. carbon ceramic discs, while shedding some pounds by replacing the stock wheels with OZ racing forged rims wrapped in a set of michelin tires. 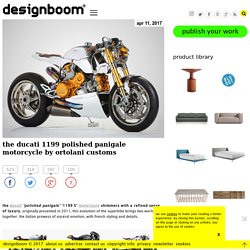 BMW K100 xaver custom scrambler by titan motorcycles. Based on a 1986 BMW ‘K100’ scrambler, titan motorcycle’s adds a darker shade of finesse with handmade aluminum parts to the ‘xaver’ custom bike. the austria-based garage chose something that was completely different in almost every single way to their client’s tastes in this build. in the end, the customer rode out what is considered one of the most unique BMW bikes we’ve seen. all images © titan motorcycles titan motorcycles found a great base model for the build: a BMW ‘K100 luxury tourer’ with just 21,000 km on the clock, having had one owner. stripping the motorcycle bare in no time, it decided to create a very dark bike. it removed the frame and prepared the whole drivetrain for matte black paint, along with the engine, and gearbox covers. the garage then had the task of completely rebuilding the frame behind the engine mount, plus the mounting points for the rear shock. 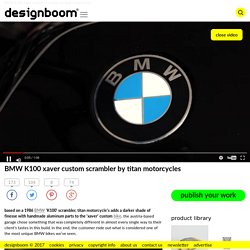 Bullit Motorcycles. Ziggy moto concept motorcycle collection. Jan 19, 2017 ziggy moto concept motorcycle collection created by ziggy moto, this series of motorcycle concepts depicts the future for bike-brands, BMW, ducati, and triumph. the UK-based design and fabrication shop is directed by the enigmatic ‘ziggy’, and has created no less than one hundred captivating renderings in the past, all of which exhibit unique and authentic interpretations of each brand. all images © ziggy moto ziggy moto’s concept motorcycle renderings cover the whole spectrum of bike shapes and styles: from the café racer, to the beautiful bobber, all of which are perfectly proportioned and he hopes that people will ‘want to throw a leg’ over. with such a level of realism on display, it would be no surprise if people were to unsuccesssfully try and mount these mythical machines. rendering identical to BMW R75/5 nerboruta: see the project in detail here. 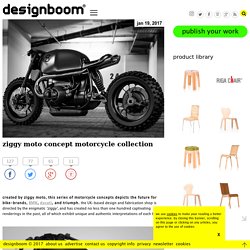 Honda C50 custom moped by 56 motorcycles. Feb 17, 2017 honda C50 custom moped by 56 motorcycles the ‘CB50’ is a customized moped by french bike workshop 56 motorcycles. based in the southeastern suburbs of paris, it began with a classic honda ‘CB50′ moped, stripped it back to the essentials and created this minimalist moped that looks worthy of a place in an art museum, as much as it deserves to be ridden. all images © 56 motorcycles / david marvier once 56 motorcycles had stripped the honda ‘CB50′ back, it received an attractive monochromatic paint finish that is ready to stand the test of time. to complement this aesthetic, its engine has received a complete engine clean-up, a keihin carburettor, plus a heavier set of rear shocks. a little pancake-style seatpad with cross stitching sits proudly where the old seat once was, revealing a small hole to access the fuel cap. 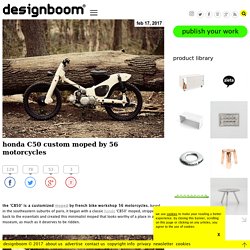 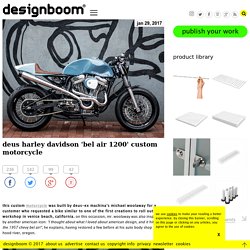 , he explains, having restored a few before at his auto body shop in hood river, oregon. all images © deus ex-machina the chromoly frame features an internal dual oil feed system and accommodates an asymmetrical race tech monoshock. thanks to this, the ‘bel air 1200′ has a much firmer ride with road-racing geometry, for high-speed straight-line stability, and superior handling in the corners. Maksim burov imagines a luxury koenigsegg motorcycle. Jan 31, 2017 maksim burov imagines a koenigsegg-designed luxury motorcycle ever wondered what a koenigsegg designed motorcycle might look like? 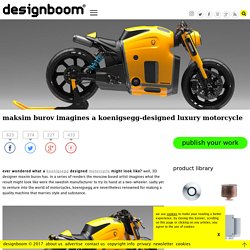 Well, 3D designer maxim burov has. in a series of renders the moscow based artist imagines what the result might look like were the swedish manufacturer to try its hand at a two-wheeler. sadly yet to venture into the world of motorcycles, koenigsegg are nevertheless renowned for making a quality machine that marries style and substance. The Beast Hoverbike. Ton-up garage 'muxima' honda FMX 650 custom motorcycle.

Dec 16, 2016 ton-up garage 'muxima' honda FMX 650 custom motorcycle ton-up garage ‘muxima’ honda FMX 650 custom motorcycle: ton-up garage is a portuguese brand dedicated to building eye-catching custom motorcycles. created in 2010, the workshop aims to create vehicles and promote a vintage lifestyle which today brings it to the best styling from the 1950’s to the 1980’s. in this vein, it has completely reworked a honda 650 into this minimalist, country-inspired, ‘muxima’ motorbike. all images © ton-up garage martin hislop I designboom. Boba Fett Motorcycle Helmet. Unlike a few selections in this slideshow of sick motorcycle helmets, you can probably wear HJC's new RPHA 11 Boba Fett helmet without getting laughed off the road (it's an obvious, but not over-the-top Star Wars circus Boba) and without smashing your head in if you hit a patch of gravel (it's DOT- and ECE-approved.)

La BMW Motorrad fait partie du projet VISION NEXT 100, célébrant les 100 ans de la marque, pour lequel Rolls-Royce avait également dévoilé son superbe concept Rolls-Royce 103EX. 1972 Nissan Skyline GT-R Hakosuka. Sinister electric cafe racer features burning hot headlamps. Nov 03, 2016 sinister electric café racer features burning hot headlamps dubbed the ‘sinister electric cafe racer’, this retro-futuristic motorcycle concept depicts what the future of electric motorcycles might hold. american designer, michael cohen, has created a number of product renderings in the past, however, this is the first time he turned his hands to a bike. based in oregon, michael has created no less than seven other captivating renderings, which all exhibit clear interpretations of how he envisions product design. South garage BMW nerboruta custom motorcycle. Nov 23, 2016 south garage BMW R75/5 nerboruta custom motorcycle south garage BMW R75/5 nerboruta custom motorcycle: the italian term ‘nerboruta’ is used to describe something powerful, muscular, and having a sinewy definition. it also happens to be the name given to this stunning 1979 airhead from italy’s south garage motor co., and it perfectly reflects the bike’s presence. transforming the late 1970’s BMW from a classic tourer to a lively bobbed beauty was no easy task. after stripping things back to their barest essentials, south garage motor co. went to work on handcrafting the parts and components to give ‘nerboruta’ a stance that earns its name. the bike’s geometry received a massive change when the springer front end was fitted: the relocation celebrates mechanical simplicity, and this one may be the smartest looking to be seen in a while. from there, the original tank was tossed in favor of a hand-formed, scalloped unit with a profile more befitting to the bike’s bobbed rear-end.

Union motion unveils the 'phaser type 1' electric motorcycle. Beautiful Modified BMW R75/7. Husqvarna Vitpilen 401 Motorcycle. Racing for Survival: 13 Extreme Vehicles for the End of the World. If you’ve ever watched The Walking Dead and thought to yourself, “in a zombie apocalypse, I would just find the nearest armored diesel-powered vehicle and pack it full of survival gear,” here’s an array of potential choices to stoke your fantasies. Some are available to the deep-pocketed public and some are technically for military use only, some fully-equipped RVs and others basically just for roaring through utter chaos and making it out alive.

Death Machines of London. 2015 Electric Motorcycles: Buyer's Guide, UPDATED. The 2015 model year follows a big 2014 for the electric motorcycle industry. Zero made significant upgrades to its entire lineup, the Harley-Davidson Livewire concept was unveiled and toured around the country, and Brammo updated its flagship Empulse. Some of the higher-end bikes--among them the Energica Ego, Lightning LS 218, Lito Sora, and Agility Saietta--have been seen at test drives and a few are even in owners' hands now. DON'T MISS: 2015 Zero Electric Motorcycles Get More Range, ABS, Tire & Suspension Upgrades [EDITOR'S NOTE: This article, published in October 2014, has been updated to reflect price cuts of $1,400 on all electric motorcycles sold by Zero, effective May 20, 2015. The prices shown are the new, reduced prices.] While the primary list of "Buy Now" motorcycles stays pretty much the same as in last year's guide, some of the "Pre-Order" bikes have now started to be delivered, mostly on an individual basis.