HYDRAULIC STEERING - PRINCIPLES OF OPERATION. Race Car Design Information, techniques. Now that you have studied and understood, it is time to consider the way to approach the designing of a car. 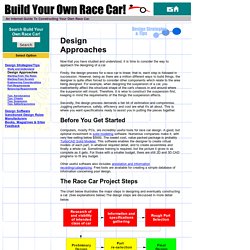 Firstly, the design process for a race car is linear, that is, each step is followed in succession. However, being as there are a million different ways to build things, the designer is quite often forced to consider other components which relate to the area being designed. For example, when designing the suspension of a car, you inadvertently affect the structural shape of the car's chassis in and around where the suspension will mount. Therefore, it is wise to construct the suspension first, keeping in mind the requirements of the things the suspension affects.

Secondly, the design process demands a fair bit of estimation and compromise. Research Of And Viability of Intended Class of Car is there to put a reality check into place before any work is done. Suspension basics/ Alignment. Perfect Steering. Race Car Design Tips and Information - Chassis. The following tips and information focus on how to optimize a race car chassis, specifically the spaceframe-type chassis. 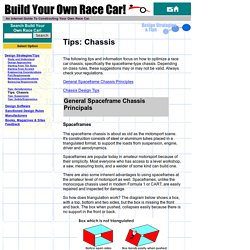 Depending on class rules, these suggestions may or may not be valid. Always check your regulations. General Spaceframe Chassis Principles Chassis Design Tips Spaceframes The spaceframe chassis is about as old as the motorsport scene. It's construction consists of steel or aluminum tubes placed in a triangulated format, to support the loads from suspension, engine, driver and aerodynamics. Spaceframes are popular today in amateur motorsport because of their simplicity. Tortional rigidity applies to spaceframes too, but because a spaceframe isn't made from continuous sheet metal or composite panels, the structure is used to approximate the same result as the difficult to twist "cigar car".

Race Car Design Tips and Information - Chassis. Mmon LPG system faults and failure symptoms. Idle Air Volume Learning 2000-2001 - Maxima Forums. Quote: No need to search, Yayomax saved the day (and plenty of my $) by posting this procedure, which DID work for my 00 GLE. 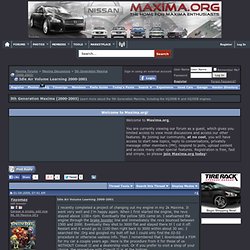 Prior to performing this procedure, my idle was around 900 to 1K after replacing MAF sensor. The only thing I did differently from Yayomax was to drive the car for a while after the learn procedure, which seemed to make the correct RPM settings stick. Like Yayomax, I saw that the correct RPM settings had reverted to their previously high RPM's after restarting the engine. I tried the relearn procedure posted elsewhere in this forum (the one that calls for depressing and releasing the accelerator pedal 5 times, etc.) and could never get the SES light to blink as described. Bottom line, my Max is running like new once again!!! Finally, in case some poor schmuck is encountering the same problems I had, here is a brief summary of the symptoms along with my course of action in coming to a solution: Symptoms: View topic - Car engine shuts off when switching to LPG.

Hi guys, Thanks for the quick answers. 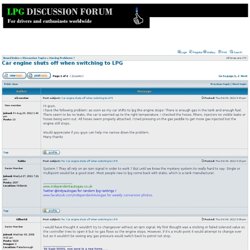 Ok I am complete beginner in the LPG field. What I know about my system is: it is a fobos one. Since car is manufactured in 2002 then I would assume the system might be a multipoint one. And also judging from those descriptions: " A Multi-Point System, is where each cylinder has its own separate gas injector installed as close as possible to the corresponding petrol injector. "A Fully Sequential System, now the most widely used, consists of again an injector for each cylinder installed as above but these injectors mimic the injection sequence of the original petrol injectors, this maintains the characteristics, performance and driveability of the original petrol engine and integrates better with the engine management system.

" Unfortunately it dies it doesn`t try to switch back to petrol. Do it yourself car painting guide free. All you need to know plus much more! Automobili Lamborghini S.p.A. MercedesShop. BenzWorld. W140 Gallery. Mercedes 500SEC.com. Peak of perfection in automobile manufactureWidely held view: “The best car in the world”Bedded in the extraordinary tradition of the brand’s luxury-class vehicles Stuttgart – The 140 series S-Class Saloons gave a clear message when they were introduced in 1991: their size and design lent them an imposing appearance, combined with highest comfort and lavish interior spaciousness. 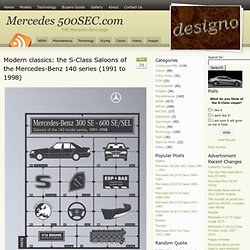 Certainly these attributes are appropriate to a Mercedes-Benz S-Class. And yet this model series was anything but undisputed when it came out: critics complained it had turned out too big, which brought disadvantages in everyday use, and on top of that was out of step with the times. Such opinions were voiced mainly in Europe.