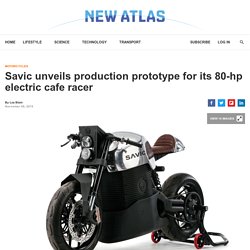 Life has been pretty crazy in recent months for Aussie electro-moto pioneer Dennis Savic and his tight-knit team. A rush of local and international interest in the original Savic prototype sent the team into overdrive working on a production-ready prototype built around a new, integrated powertrain unit. Savic himself has been working hard getting the business and production side ready to meet demand, while balancing rapid promotions and escalating responsibilities in his day job as an Optimization Engineer at Ford, not to mention a fresh engagement to his long-suffering partner Tess. Savicmotorcycles. Hades Design. The mighty machines launches a tailored suit for sarolea’s electric superbike. In collaboration between creative studios, the mighty machines has developed a bespoke suit specifically designed for motorcyclists. launched together with the ‘sarolea’ electric motorbike, the ‘MM.01’ project combines a finely-tailored suit with integral road protection from café costume, a designer helmet and the traditionally crafted studio blade knife. in an effort to combine quality craftsmanship with innovative design, the team intends to form an exclusive lifestyle brand. image © jente willems photography image © serge rusak design sketch. 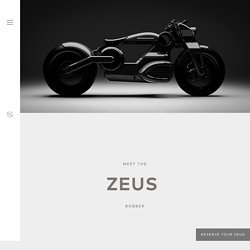 Your Expression of Interest has been received.A member of our team will contact you soon. Oops! Something went wrong while submitting the form. Please try again. Lightning unveils Strike, the first affordable electric sportsbike. The buttonless novus electric motorcycle is a minimalist's dream. ZERO MOTORCYCLES – The Electric Motorcycle Company - Official Site. Tarform opens up pre-orders on its handcrafted electric motorcycles. 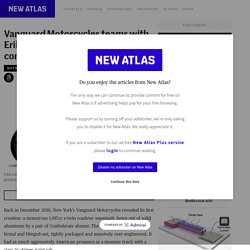 The Vanguard Roadster was brutal and blinged-out, tightly packaged and massively over-engineered. It had as much aggressively American presence as a monster truck with a stars 'n' stripes paint job. But, as several of readers were quick to point out, there are a ton of Americans who no longer feel like giant gas-guzzling noise machines are how their country should be represented. There's a growing segment (and I'm goings to assume it's mainly on the coasts) that are much prouder of Tesla, Alta and Zero than they are of Shelby or Harley-Davidson.

They see a gleaming future where America takes a commanding lead in high-performance electrics, and they'd like to put the dirty days of petroleum behind them as quickly as possible. Well, it seems Vanguard can see which way the wind's blowing. Exodyne electric motorcycle fuses battery power with home-made engineering. Like a jacked-up battery pack connected to two wheels and a handlebar, the ‘exodyne’ electric motorcycle fuses rapid power with energetic, home-made engineering. created by a veterinarian in atlanta, usa, alan cross’ bespoke bike is the result of nine months of research, design and fabrication work. its center box frame, which houses 48 lithium polymer battery cells in a 100V 32 configuration, connects directly to the head stock with a swing arm pivot point. combined with a rear hub 11 kW motor, it has a top speed of 60 mph and a total range of 20 miles. all images courtesy of victoria velvet photography via silodrome via silodrome. 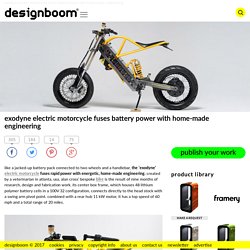 BMW Concept Link envisions the future of urban mobility. BMW Motorrad created the Vision Next 100 series of concept machines to demonstrate its take on the next century of personal mobility. 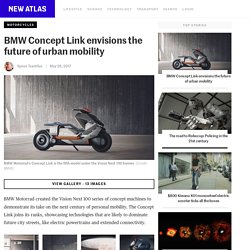 The Concept Link joins its ranks, showcasing technologies that are likely to dominate future city streets, like electric powertrains and extended connectivity. BMW launched the Vision Next 100 platform last year, as part of its centenary celebration, with a series of concepts that cuts across the group's brands; BMW motorcycles and cars, as well as Mini and Rolls Royce. Electric scooter channels the spirit of the penny farthing. In some ways, it makes sense to put small wheels on electric scooters – they accelerate quickly, and allow the vehicle to remain on the small-and-portable side. 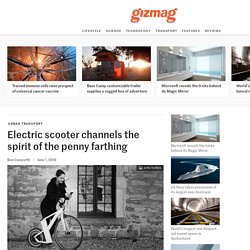 On the other hand, they can also easily get stuck in potholes, causing the rider to fly over the handlebars. New Victory RR electric superbike targets Isle of Man TT glory. Victory Motorcycles is returning to the TT Zero at the Isle of Man with a new electric racer. 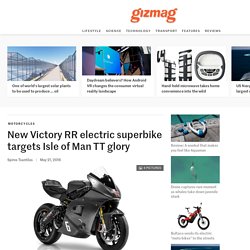 After achieving a third place finish in its debut last year, the American team will field the 170-hp Victory RR superbike in an effort to reach the top of the podium. The acquisition of Brammo from the Polaris Group meant a lot more for Victory than just the addition of a market-ready electric model. Light Rider. Luke Workman interview: Petrolheads are missing the tarmac-tearing potential of electric vehicles. Grab life by the danglies and extract maximum joy from every minute: it's an awesome philosophy that we'd all like to live by, but there are some people that just seem born to do it. 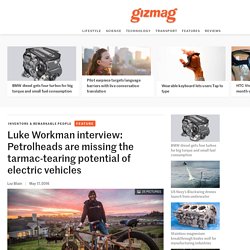 Luke Workman is one of 'em. Born into a family of hot rod street racers, Workman hustled his way through college dreaming of being a Formula One engineer, then had an epiphany and ended up as one of the world's foremost lithium battery wizards. We first met Luke at Zero Motorcycles, where tales of his epic, outrageous after hours shenanigans were already legendary. So on a cold, wet night in January, Loz Blain dropped in for a long chat and some hair-raising seat time in some of Workman's crazy home-built electric hot rods. Bultaco sends its electric "moto-bikes" to the streets. Last year, Spanish motorcycle marque Bultaco rose from the ashes to present an all-new motorcyc ... er ... electric mountain bike. 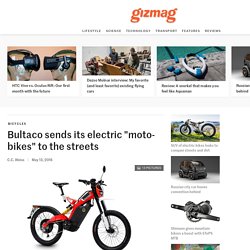 The 2,000-watt/37mph (60 km/h) Brinco bike wasn't exactly the kind of "moto-bike" we imagine Bultaco fans were waiting for, but it was a pretty sweet ride in its own right. Bultaco still isn't ready to announce a legit production electric motorcycle like the Rapitan, but it's moving one step closer, bringing the Brinco off the dirt and onto the street. Brinco calls them "moto-bikes" and some might call them electric bikes, but the new Brincos are designed to meet moped regulations. Powered by a brushless rear hub motor, each of the three new Brinco models (the R-E, the C and the S) is being built in "45" and "25" specs, both designed to meet specific regulations within the European Union. 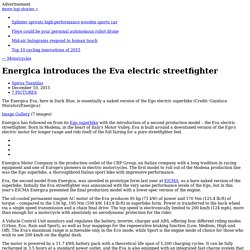 Born in Modena, in the heart of Italy's Motor Valley, Eva is built around a downtuned version of the Ego's electric motor for longer range and rids itself of the full fairing for a pure streetfighter feel. Energica Motor Company is the production outlet of the CRP Group, an Italian company with a long tradition in racing equipment and one of Europe's pioneers in electric motorcycles.

The first model to roll out of the Modena production line was the Ego superbike, a thoroughbred Italian sport bike with impressive performance. Eva, the second model from Energica, was unveiled in prototype form last year at EICMA, as a bare naked version of the superbike. Here is a custom-built ebike made from a moped frame. Here is an electric bike made from the frame of a Puch Maxi moped. The builder is a young man named Bernd, who lives in Korneuburg (near Vienna), in the beautiful country of Austria.

Although a moped frame is an unconventional choice, this frame style allowed Bernd (endless-sphere member puchwudi) to hide the significant battery pack inside the frame. Here is the first pic in the series. This old frame was donated to Bernd by a friend of his fathers. Autos - Model M could put Tesla on two wheels. Before we begin, let us state that for the record that this incredible ‘Tesla’ motorbike is neither real nor official. Got it? Good. However, if there’s anything we can do to convince Tesla CEO and founder Elon Musk to build the thing, we’re willing to do it.

E-raw electric moto pushes the boundaries of traditional motorcycle design. Bolt M-1 finds a home between electric motorcycle, moped and bicycle. Part electric bicycle, part motorcycle and part moped, the Bolt M-1 is a capable, two-wheeled machine engineered for urban commuting. The fully electric bike wears light motorcycle styling and can put out up to 5,500 watts for speeds up to 40 mph (64 km/h). It can also be dialed back to 1,000 watts and ridden like an e-bike. Bolt Motorbikes founder and CEO Dr.

Bolt Motorbikes. Gizmag rides the electric Lightning LS-218: The world's fastest production motorcycle. Last May, when Gizmag first featured the "truly, horrifyingly fast" Lightning LS-218, I ended by saying: "If I could take any bike in the world out for a test today, this would be the top of the list. " Electric Motorcycles Go Mainstream With Harley's Livewire. 7 Best Electric Motorcycles of 2014. Our Favorite Vintage Inspired Gear Almost as good as time travel. Six Soaring Pilot's Watches Don't let them fly off your wrist. 10 Canned Craft Beers Worth Trying Can it.

Too fast, too strong, too scary: Electric Lightning LS-218 will be the fastest production bike on the planet. No road vehicle needs a 218 mph (350 km/h) top speed. No motorcycle needs to make 200 horsepower, with as much torque as a Hyundai iMax people mover. "Holy s##t!" – the amazing Zero SR electric motorcycle blows our minds. It's been about three years since we last tested one of Zero Motorcycles' electric bikes, and in that time, the company has been very busy. MotoCzysz wins IOM TT Zero electric bike race demonstrating 4 decades of progress in just 4 years. MotoCzysz today won its fourth TT ZERO race in a row, Michael Rutter his third straight. Lightning's Electric Superbike takes 2013 Pikes Peak International Hill Climb.

Innovation through competition. LAPD Testing Electric Motorcycles. They're quiet, lightweight and eco-friendly. Saietta R electric performance bike heading for US shores in 2014. Since 2011, the UK's Agility Motors has been promising to deliver on its highly anticipated electric motorbike. Promoted as the firm's "next generation electric urban sport motorcycle" the new 96.5 hp Saietta R, with its 3.9 second 0-60 mph (96 km/h) time and unique visual statement, is now set to hit US shores in 2014.

View all Marketed as an urban guerrilla street bike, the Saietta, whose name translates from Italian as "thunderbolt," is most certainly not the world’s first performance electric motorcycle (Lightning’s Electric Superbike won the legendary Pike’s Peak Challenge this year, beating both gas and electric bikes). But Agility, which has been working with racing partner Agni Racing on EV racers for years, hopes to show that its track experience can successfully translate over into the Saietta R. Lito announces first production run of 190 km/h Sora electric motorcycle.