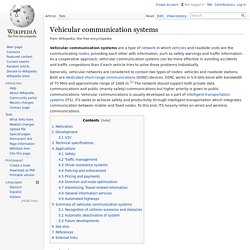 Both are dedicated short-range communications (DSRC) devices. DSRC works in 5.9 GHz band with bandwidth of 75 MHz and approximate range of 1000 m.[1] The network should support both private data communications and public (mainly safety) communications but higher priority is given to public communications. Vehicular communications is usually developed as a part of intelligent transportation systems (ITS).

ITS seeks to achieve safety and productivity through intelligent transportation which integrates communication between mobile and fixed nodes. To this end, ITS heavily relies on wired and wireless communications. Motivation[edit] Forget Driverless Cars: Driverless Bus Will Hit Swiss Roads In 2016. CarPostal contracted Bestmile for shuttles that can carry 9 passengers. 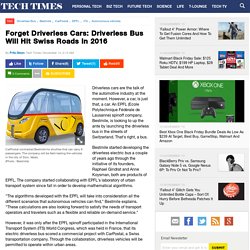 The company will be field-testing the vehicles in the city of Sion, Valais. (Photo : Bestmile) Driverless cars are the talk of the automotive industry at the moment. However, a car, is just that, a car. An EPFL (Ecole Polytechnique Fédérale de Lausanne) spinoff company, Bestmile, is looking to up the ante by launching the driverless bus in the streets of Switzerland. Bestmile started developing the driverless electric bus a couple of years ago through the initiative of its founders, Raphael Gindrat and Anne Koysman, both are products of EPFL. Ford Is Now Testing Driverless Cars On The Streets Of A Fake City  Brum27 comments on Why Self-Driving Cars Must Be Programmed to Kill. All the Accidents California's Driverless Cars Got in by Being Too Good at Driving. Autonomous truck cleared to drive on US roads for the first time. 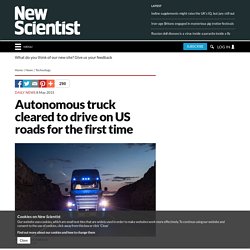 The Little-Known Robot Taxi That Could Outrun Google and Uber. The View from the Front Seat of the Google Self-Driving Car, Chapter 2. Summer is one of the most dangerous times of the year on U.S. streets, as many of us spend more time behind the wheel, heading out for long road trips or local barbecues. 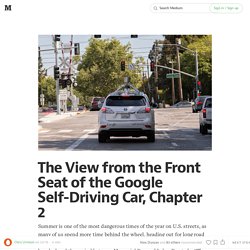 The AAA Foundation for Traffic Safety, for example, has declared the period between Memorial Day and Labor Day to be “The 100 Deadliest Days” for teenage drivers — and they’re not on the roads alone. Statistics like this keep my team and me working hard on a fully self-driving car that can get you from A to B safely, no matter how many beverages you have by the pool or how many texts you send to the new friend you met there. Our self-driving cars are being hit surprisingly often by other drivers who are distracted and not paying attention to the road. That’s a big motivator for us. The most recent collision, during the evening rush hour on July 1, is a perfect example. Although we don’t like getting hit, there’s a silver lining here. You can find chapter 1 here. Google's Plan to Eliminate Human Driving in 5 Years. Google’s adorable self-driving car prototype hits the road this summer, the tech giant announced last week. 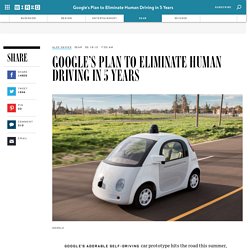 Real roads, in the real world. The car has no steering wheel or pedals, so it’s up to the computer to do all the driving. As cool as this sounds, it isn’t a huge technological step forward. Autonomous long-distance drive. The Driverless Cars of Greenwich. Google driverless car. States that allow driverless cars public road testing. 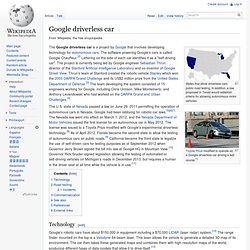 In addition, a law proposed in Texas would establish criteria for allowing autonomous motor vehicles. Toyota Prius modified to operate as a Google driverless car driving a test course.[1] The U.S. state of Nevada passed a law on June 29, 2011 permitting the operation of autonomous cars in Nevada. Google's Self-Driving Car Hits Roads Next Month—Without a Wheel or Pedals. Google’s latest self-driving car prototype has headlights, but no steering wheel or pedals. 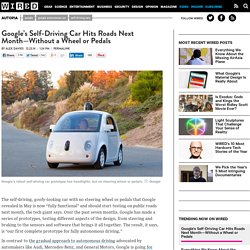 Google The self-driving, goofy-looking car with no steering wheel or pedals that Google revealed in May is now “fully functional” and should start testing on public roads next month, the tech giant says. Over the past seven months, Google has made a series of prototypes, testing different aspects of the design, from steering and braking to the sensors and software that brings it all together. The result, it says, is “our first complete prototype for fully autonomous driving.” In contrast to the gradual approach to autonomous driving advocated by automakers like Audi, Mercedes-Benz, and General Motors, Google is going for what it calls a “moonshot.” The new version doesn’t look too different from the one we saw in May. We’re still disappointed that Google didn’t take this opportunity to create something … cooler. Here's How to Get Rid of Traffic Jams.

We have HOV lanes (or carpool lanes as we call them) and now also have HOT lanes in Los Angeles, and they can help, but during rush hour it's a crap shoot, especially the non-toll carpool lanes. 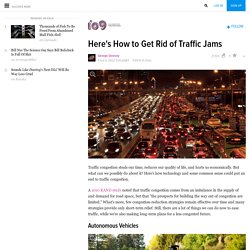 All it takes is one slow driver who decided to get in just because they've got other people in the car to ruin it for everyone else. And some people will just assume they can speed through, even though even the carpool lane can get jammed. Toyota Joins Slew of Major Automakers Promising Self-Driving Technology This Decade. Toyota recently added its voice to a chorus of major automakers promising self-driving systems when the firm announced it would offer a car with “automated driving technologies” by the mid-2010s. 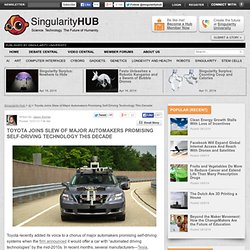 In recent months, several manufacturers—Tesla, Nissan, BMW—have published forecasts of robot cars inside the next decade. Toyota, the latest to promise automated car tech, is more modest than some of its competitors.