The 10 Best Muscle Cars for 2021. Dodge Ram vs. Ford F-150 and Chevy Silverado – Comparison Test. Proposition: No vehicle offers a broader range of capabilities than a full-size pickup truck with four doors. 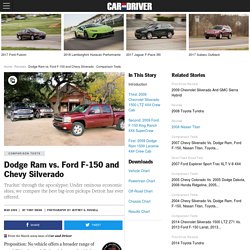 Seating for five. Covered cargo space for stuff you want to keep locked up and dry. Open cargo space for really big stuff and stuff you don’t want inside there with you, to wit: dead deer, live badgers, bags of organic fertilizer. Big load capacity. Big towing capability. Unless you want to shell out the substantial premium you’d pay for a hybrid, which might get you a few extra mpg, that’s the price of big-truck capabilities. Some members of Congress seem to believe they can legislate big mpg gains in big pickups without serious performance penalties. In any case, reductions in fuel consumption occur automatically, as a function of price.

Meanwhile, domestic truckmakers have been tiptoeing along the edge of a financial abyss, and corporate execs are muttering the Twenty-third Psalm. Actually, there are some other bright spots in the gloom. View Photos View Photos. 2015 BMW M3 vs. 2015 Mercedes-AMG C63 S, 2016 Cadillac ATS-V – Comparison Test. From the August 2015 issue The first BMW M3, that little snarly sweetheart E30 from the Reagan years, didn’t invent its genre. 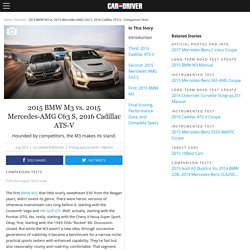 There were heroic versions of otherwise mainstream cars long before it, starting with the Cosworth Vega and VW Golf GTI. Well, actually, starting with the Pontiac GTO. Mercedes-AMG GT / GT S Reviews - Mercedes-AMG GT / GT S Price, Photos, and Specs - CARandDRIVER. Normally, prior to the launch of an important vehicle, manufacturers assemble a jet-lagged mob of scriveners for an every-last-detail PowerPoint presentation. 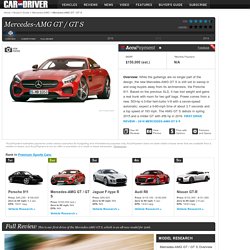 AMG was so confident that the new GT S would speak for itself, it simply gave us a quick route briefing and sent us scuttling out the door and down the San Francisco Peninsula toward Monterey in this, the final-spec version of its latest halo product. (We’ve previously ridden in a test car and driven a prototype.) Make no mistake: Despite the fact that the GT S is likely to cost two-thirds as much as AMG’s most expensive offering, the S65 coupe—final pricing has yet to be released for either car—the car we’re discussing here serves as the brand’s calling card. Subaru WRX STI: Old vs. New. 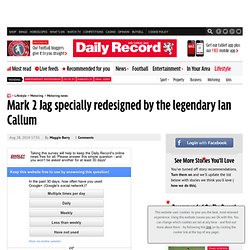 The stunning and unique car was unveiled at the opening of the new headquarters of Classic Motor Cars Ltd, the famed Bridgnorth company who carried out the modifications. The building was officially opened by motorcycle and Formula One Grand Prix world champion John Surtees OBE and the car was unveiled by Jaguar’s legendary test driver Norman Dewis. But the star of the show was undoubtedly the car recreated by Callum, Director of Design at Jaguar Cars. The Mark 2 by Callum has been 18 months in the making and will now be used by the Scot for his own personal use. He said: ““This is a very personal statement. This Mark 2 features a modified and uprated 4.3 litre XK engine, five-speed manual gearbox, unique independent rear suspension and upgraded front brakes. “The car’s form is now 30mm lower and sits on 17” split rim spoke wheels. This Gadget Allows Cars to (Almost) Drive Themselves. 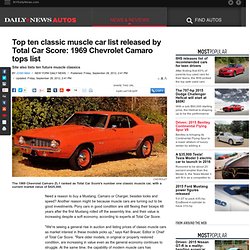 Need a reason to buy a Mustang, Camaro or Charger, besides looks and speed? Another reason might be because muscle cars are turning out to be good investments. Pony cars in good condition are still flexing their biceps 48 years after the first Mustang rolled off the assembly line, and their value is increasing despite a soft economy, according to experts at Total Car Score. "We're seeing a general rise in auction and listing prices of classic muscle cars as market interest in these models picks up," says Karl Brauer, Editor in Chief of Total Car Score.

"Rare older models, in original or properly restored condition, are increasing in value even as the general economy continues to struggle. Dodge: Hellcat fastest muscle car ever (with video) 1 of 24. 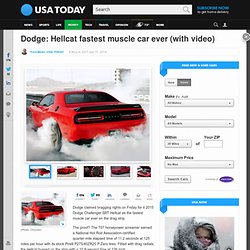 10 greatest muscle cars of all time. Lamborghini Huracan Tempers Raging Bull With Refinement. Some people may be disappointed to hear this, but you can throw away many of your preconceptions about Lamborghini. 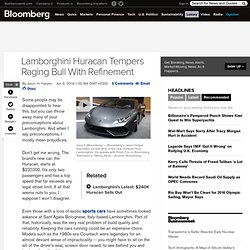 And when I say preconceptions, I mostly mean prejudices. Don’t get me wrong. The brand’s new car, the Huracan, starts at $237,000, fits only two passengers and has a top speed that far exceeds any legal street limit. If all that seems nuts to you, I suppose I won’t disagree. 2012 Lamborghini Gallardo - Jay Leno's Garage.