Ferrari Shares Ferrari Stock Market News. Bentley have officially unveiled its brand new 4x4 at the Frankfurt motor show and we thought this would be the perfect opportunity to analyse whether this new car will be a game changer and ultimately where the luxury 4x4 market is going. 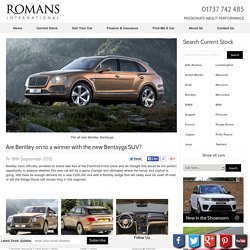 Will there be enough demand for a near £200,000 4x4 with a Bentley badge that will rarely ever be used off-road or will the Range Rover still remain king in this segment. Initial Reaction Some of you might remember when Bentley first unveiled it’s initial design for a 4x4 in 2012 named as the EXP 9 F. Truth be told it went down terribly and Bentley were heavily criticised for it’s styling, mainly for being so ‘bling’. Are Bentley on to a winner with the new Bentayga SUV? The second generation of the 991 Series has been announced with the main talking point the brand new 3.0 litre twin turbo charged flat six engine which now power the Carrera and Carrera S model. 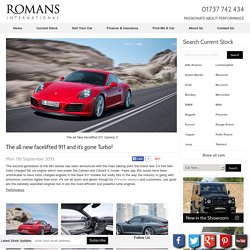 Years ago this would have been unthinkable to have turbo charged engines in the base 911 models but sadly this is the way the industry is going with emissions controls tighter than ever. It's not all doom and gloom though for Porsche dealers and customers, yes gone are the naturally aspirated engines but in are the more efficient and powerful turbo engines. Performance Straight out the box, the new Porsche 911 Carrera for sale now produces 365 bhp and 332lb ft of torque and 414 bhp and 369lb ft in Carrera S guise which is a 20bhp gain over the outgoing versions. More remarkable are the performance figures as the new 911 Carrera accelerates from 0 to 62 mph in 4.2 seconds and reaches a 183mph top speed whereas the Carrera S will do 62 mph in just 3.9 seconds and top 191 mph.

Geneva Motor Show 2015 - Top 10 Cars. Top 10 Cars from the Geneva Motor Show 2015. Romans International among Britain’s best companies. Romans international has fallen to fantastic praise after being included in the London Stock Exchange's 1000 Companies to Inspire Britain report, an event which is being met with great interest. 1000 Companies to Inspire Britain is an annual celebration arranged by the London Stock Exchange Group (LSEG) that highlights the fastest growing and most dynamic small and medium-sized enterprises across the UK. 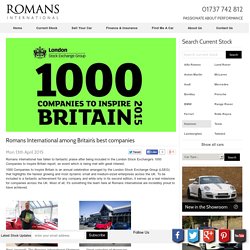 To be included is a fantastic achievement for any company and while only in its second edition, it serves as a real milestone for companies across the UK. Most of all, it's something the team here at Romans International are incredibly proud to have achieved. To be selected for the coveted list, not only do businesses have to demonstrate positive growth over the four-year period, companies also have to outperform peers within their fields, and it's for this reason that we are embracing this here at Romans International. McLaren's New Baby Sports Car: The 570s Coupe. McLaren Automotive are on a bit of a role at the moment, bearing in mind a month ago at the Geneva Motor Show we saw the live launch of their 675 LT, a track focused Ferrari 458 speciale rival limited to only 500 units worldwide, the mind boggling hypercar P1 GTR and now this: the 570s Coupe. 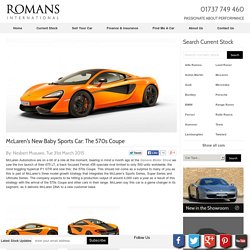 This should not come as a surprise to many of you as this is part of McLaren’s three model growth strategy that integrates the McLaren’s Sports Series, Super Series and Ultimate Series. The company expects to be hitting a production output of around 4,000 cars a year as a result of this strategy with the arrival of the 570s Coupe and other cars in their range. McLaren say this car is a game changer in its segment, as it delivers McLaren DNA to a new customer base. So what is this 570s Coupe all about? Rise and Fall of Jeremy Clarkson & Top Gear. The news that Jeremy Clarkson has been officially sacked by the BBC came as a huge surprise and disappointment to many fans of Top Gear. 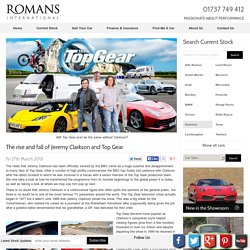 After a number of high profile controversies the BBC has finally lost patience with Clarkson after the latest incident in which he was involved in a fracas with a senior member of the Top Gear production team. We now take a look at how he transformed the programme from its humble beginnings to the global power it is today, as well as taking a look at where we may see him pop up next. Geneva Motor Show 2015 - Top 10 Cars. Romans International had the pleasure of attending what is regarded as the biggest and most prestigious motor events in the world, the Geneva Motor Show 2015. 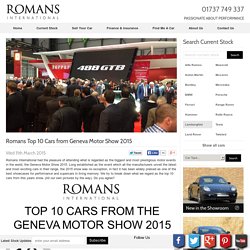 Long established as the event which all the manufacturers unveil the latest and most exciting cars in their range, the 2015 show was no exception, in fact it has been widely praised as one of the best showcases for performance and supercars in living memory. We try to break down what we regard as the top 10 cars from this years show. (All our own pictures by the way). Romans International on Pinterest. Ferrari 458 Speciale A Debut Paris Motor Show.

One of the most eagerly anticipated cars of 2015, the Ferrari 458 Speciale A has recently been announced as the most powerful convertible that Ferrari have ever created and with it debuting at the Paris Motor Show this weekend its best we take a look at what Ferrari dealers and fans can expect. 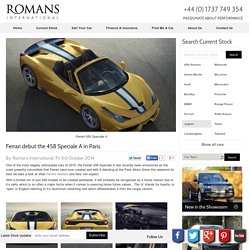 With a limited run of just 499 models to be created worldwide, it will instantly be recognized as a future classic due to it’s rarity which is so often a major factor when it comes to prancing horse future values. Romans International Ltd. Romans International. Find a Supercar Dealer. Selling Your Supercar? 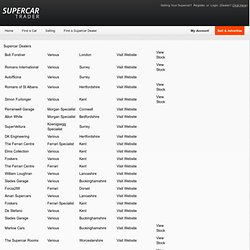 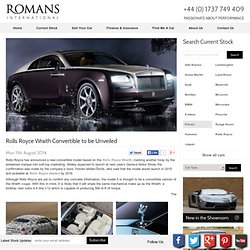 Widely expected to launch at next year’s Geneva Motor Show, the confirmation was made by the company’s boss Torsten Müller-Ötvös, who said that the model would launch in 2015 and available at Rolls Royce dealers by 2016. Although Rolls Royce are yet to confirm any concrete information, the model it is thought to be a convertible version of the Wraith coupe.

With this in mind, it is likely that it will share the same mechanical make up as the Wraith: a 624bhp, twin turbo 6.6 litre V12 which is capable of producing 590 lb-ft of torque. The hard-top Wraith can reach 62mph in just 4.4 seconds from standstill, but it’s likely that the new convertible Rolls will offer a slightly diluted rate of acceleration because of the added strengthening and stiffening to the chassis. Rolls Royce keeping information under wraps Back to articles. Land Rover unveils Range Rover Sport SVR. Jaguar Land Rover will this week unveil the Range Rover Sport SVR, a speed machine that will become the fastest model in the company’s history. 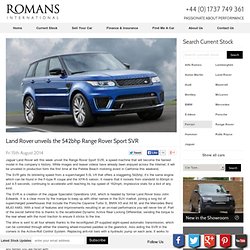 While images and teaser videos have already been enjoyed across the internet, it will be unveiled in production form the first time at the Pebble Beach motoring event in California this weekend. Auction World Record at 2014 Pebble Beach Ferrari 250 GTO. Some of the rarest vehicles in the world went under the hammer over the weekend, with the annual Pebble Beach auctions seeing some of the world’s finest machines being sold for millions of pounds with the headline sale of a Ferrari 250 GTO which broke the all-time auction world record. The auction sale at the annual Pebble Beach Concours d'Elegance is one of the most prestigious motoring events in the calendar year and the 2014 auction has not disappointed. Much of the pre-auction hype was focused on how much the 1962 Ferrari 250 GTO Berlinetta was going to make.

The former racing car sold for a $38.1million (£22.8m), including buyer’s fees surpassing the world record of $30m for a car in auction but the 250 GTO had been tipped to fetch as much as $70m prior to the sale so despite breaking the world record the figure reached was in some ways disappointing. A 1965 Mercedes-Benz 300SL Gullwing also changed hands for $1,320,000, earning the highest sale for Russo and Steele.

Back to articles. Mercedes enter new territory with the AMG GT. Mercedes Benz have finally unveiled the AMG GT, a model which has been much anticipated by the motoring world for several months. The second car developed entirely by AMG after the SLS it shares the same front engine, rear wheel drive 2 seater layout as the SLS, but AMG have developed a brand new 4.0L twin turbo engine and ditched the 6.2L naturally aspirated V8 that we love here Romans International. Interms of power, the standard AMG GT offers 456bhp and can accelerate from 0-62mph in just four seconds, with a top speed of 189mph.

However, Mercedes are offering an even faster version called the AMG GT S that has 503bhp and does 0-62 mph in just 3.8 seconds with a top speed of 193mph. Your Ridiculously Cool Blue Carbon Fiber Noble M600 Wallpaper Is here. So I'm curious - Carbon is carbon is black it isn't blue no matter what magic trickery you use. So the assumption would be that the blue is kevlar, as it's the most commonly dyed for weaving. In that case, they made a Carbon kevlar Noble. That's one of the most stirring combinations of car words that I can imagine, up there with "Ariel Atom V8" and "here have a free Boss 302".

It's like Playboy manned up and got Jessica Biel instead of Lohan. Black & White Bugatti Veyron. We zagen al eens een zwarte Veyron en een witte Veyron en voor mensen die niet kunnen kiezen is er nu deze zwart-witte Veyron. Specialists, sales and servicing. Audi RS6 Avant For Sale (2013) on Car And Classic UK [C521629] Partners - Twisted Performance. Noble Automotive. New Land Rover Discovery Concept. Porsche Macan 18 Month Waiting List. While Porsche was made famous by sports cars like the 911, Boxster and the classic 944, the engineering experts from Stuttgart have been making their profits in recent years from a completely different type of vehicle. Ferrari Turning Back to the Turbo Engine. The downsizing of engines has become common place in the world of automotive and performance cars and now the biggest name of all, Ferrari has addressed this continuing trend in order to meet emission regulations by returning to turbocharged engines. Bentley unveil Continental GT3-R.

BMW enters the electric realm with i8. Replacing An Alternator In 10 Easy Steps. Replacing A Catalytic Converter. Is your car running a little rough? Is your fuel consumption getting worse and worse? Is It Worth Replacing My Car Engine? It’s a common misconception among many drivers that once something packs up; it’s probably time to buy yourself another motor.

What Does Your Car Say About You? The Defender Gets More Serious - PG Times. Vauxhall Spare Parts. Top Signs Your Car Needs Repairing And How To Fix It On The Cheap. Romans International - Luxury and Performance Supercars, New and Used. Accessorising Your Car For Christmas. The Best (And Worst) Motoring Gifts For Christmas. Part Gateway's Guide To Saving Money On Running Your Car. (More) Things To Consider When Driving In Winter Conditions. How To Save Money On Looking After Your Car This Winter.