Convention for international driving codes require the driver to be at all time in control of his vehicul. Since 2016, an exception has been introduced when the automated system is under the driver control and can be disabled at anytime.

Want to receive a weekly deep dive into all things auto, transportation, & logistics? Click here to subscribe to our new auto tech newsletter. Private companies working in auto tech are on pace to attract record levels of deals and funding in 2016, with autonomous driving startups leading the charge. Autonomous Vehicle Technology: A Guide for Policymakers. For the past hundred years, innovation within the automotive sector has created safer, cleaner, and more affordable vehicles, but progress has been incremental. 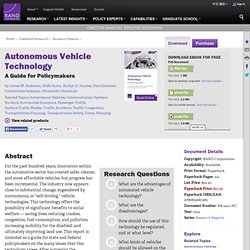 The industry now appears close to substantial change, engendered by autonomous, or "self-driving," vehicle technologies. This technology offers the possibility of significant benefits to social welfare — saving lives; reducing crashes, congestion, fuel consumption, and pollution; increasing mobility for the disabled; and ultimately improving land use. This report is intended as a guide for state and federal policymakers on the many issues that this technology raises. After surveying the advantages and disadvantages of the technology, RAND researchers determined that the benefits of the technology likely outweigh the disadvantages.

However, many of the benefits will accrue to parties other than the technology's purchasers. This report results from the RAND Corporation's Investment in People and Ideas program. Autonomous-vehicles-the-public-policy-imperatives. It is 2025 and autonomous vehicles (AVs) are a fact of life. 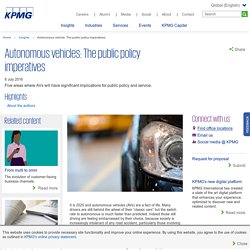 Many drivers are still behind the wheel of their “classic cars” but the switch rate to autonomous is much faster than predicted. Governor Cuomo Announces Autonomous Vehicle Testing to Begin in New York State. Governor Andrew M. 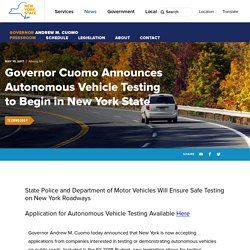 Cuomo today announced that New York is now accepting applications from companies interested in testing or demonstrating autonomous vehicles on public roads. Included in the FY 2018 Budget, new legislation allows for testing autonomous technology through a year-long pilot program. In addition to the legislation, the new Department of Motor Vehicles application process is another step forward in making New York the epicenter of cutting-edge technology and innovation. How a College Kid Made His Honda Civic Self-Driving for $700. Brevan Jorgenson’s grandma kept her cool when he took her for a nighttime spin in the Honda Civic he’s modified to drive itself on the highway. 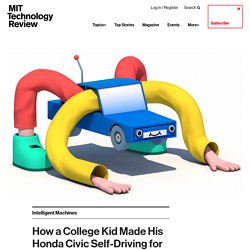 A homemade device in place of the rear-view mirror can control the brakes, accelerator, and steering, and it uses a camera to identify road markings and other cars. “She wasn’t really flabbergasted—I think because she’s seen so much from technology by now,” says Jorgenson, a senior at the University of Nebraska, Omaha. Others are more wary of the system, which he built using plans and software downloaded from the Internet, plus about $700 in parts. Sponsor Content: The Connected Car: Cybersecurity and Privacy Questions for t... Stanford's Autonomous Car Gets A Workout. Up close with Stanford's self-driving car. Future of automotive technology: Are OEMs and consumers ready? Toward a self-driving future Science-fiction visionaries have long promised us all kinds of futuristic transportation options, and while jetpacks and teleportation are still some ways off, the technologies are finally in place to make self-driving cars a reality. 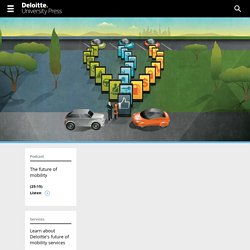 It’s time for automakers to put the pedal to the metal as they compete with technology companies and other industry disruptors to put partially or fully autonomous vehicles on American roads. The auto industry has a head start: After decades of investments, today’s vehicles offer many partially autonomous features like lane departure systems, adaptive cruise control, and emergency braking. Emerging technologies could enable even more vehicle-to-vehicle and vehicle-to-infrastructure connectivity, making the leap to fully driverless cars even smaller. The good news is twofold: First, US consumer interest in advanced vehicle automation has increased since 2014, especially among the younger generations. Bad news for some automakers. Crypto-Gram: February 15, 2017. By Bruce Schneier CTO, Resilient Systems, Inc. schneier@schneier.com A free monthly newsletter providing summaries, analyses, insights, and commentaries on security: computer and otherwise. 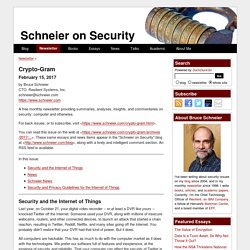 For back issues, or to subscribe, visit < Website asks you to think like a self-driving car and decide who should die / Boing Boing. The Moral Machine is a website from MIT that present 13 traffic scenarios in which a self-driving car has no choice but to kill one set of people or another. 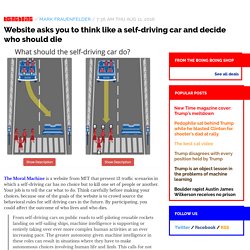 Your job is to tell the car what to do. Think carefully before making your choices, because one of the goals of the website is to crowd source the behavioral rules for self driving cars in the future. By participating, you could affect the outcome of who lives and who dies. Apple shows ambition to get into self-driving car race. Autonomous vehicles could cost America 5 million jobs. What should we do about it? Suddenly the era of driverless cars seems very near indeed. 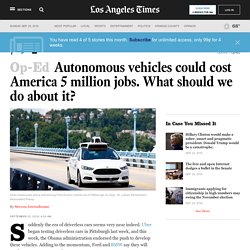 Uber began testing driverless cars in Pittsburgh last week, and this week, the Obama administration endorsed the push to develop these vehicles. Adding to the momentum, Ford and BMW say they will produce autonomous cars by 2021. Driverless cars will create some big winners — imagine how Uber’s and Lyft’s profits will jump when they can keep 100% of fares instead of letting drivers keep 70%. Les premiers taxis sans chauffeur roulent à Singapour. Uber et Google en rêvaient, nuTonomy l’a fait. 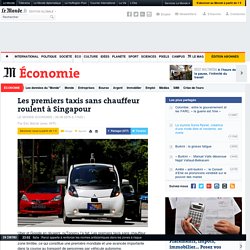 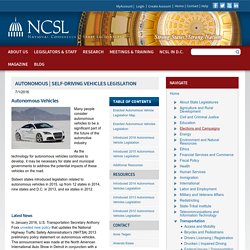 Additional Resources NCSL Resources. Autonomous Car Driving through heavy City Traffic. Autonomous Cars Influence Study. Autonomous Cars Influence Study (July 2014) Self-driving cars may not yet be on the dealer’s lot, but the market is rapidly developing into one driven by tech companies, as traditional automakers scramble to play catch-up. Google’s reveal of their self-built car rocketed their influence up 4x, while other tech players like Intel saw their own gains. Meanwhile, automotive giants like GM and Mercedes are stuck in neutral, as startups Uber and Zipcar are nipping at their heels. Appinions’ study found Google to be the most influential company in the autonomous cars sector, a market which saw rapid fluctuations in conversation over the two month study period, steered largely by product announcements and demos. Top Gear BMW that needs no driver. Potential obstacles. Potential Advantages.

Major Automobile Manufacturers. Infographic. Autonomous Vehicle. Legislative and Regulatory Action. EN-V: Not your grandfather’s Chevy - Nightly. If you thought last week’s Spark EV announcement was a move toward urban density solutions, you would be correct, but Chevrolet has not finished downsizing its electric mobility offerings. Also announced last week was the Chevrolet-badged second generation of the EN-V Concept.

According to Chris Perry, vice president, global Chevrolet marketing and strategy, the bowtie insignia is significant for the EN-V – which is short for Electric Networked-Vehicle. “For 100 years, the Chevrolet brand has been focused on making advanced technology that improves customers’ lives accessible and affordable, and the Chevrolet EN-V will continue that tradition,” said Perry. “By 2030, more than 60 percent of the world’s 8 billion people will live in urban areas. The Chevrolet EN-V represents a possible solution for global customers living in markets where alternative transportation solutions are needed.”

Content In Brief In Brief: James M. Vehicular communication systems. Former GM R&D Head Predicts Driverless Cars By 2020. Looking into the tea leaves – that is, citing transportation and demographic trends – a former General Motors R&D head has said that by 2020, self-driving vehicles will be available. The 2020 vision for autonomous vehicles presented by Larry Burns at the University of Michigan Robotics Day could solve such issues as distracted driving and tailgating. It could also dovetail with calls for reliance on lighter – likely hybrid or all-electric – vehicles, and greater efficiency. A few years back, GM made the case for the Volt as a car for the future based on studies that average daily driving for three-quarters of Americans was under 40 miles per day. Brad Ideas - Nightly. I often see the suggestion that as Robocars get better, eventually humans will be forbidden from driving, or strongly discouraged through taxes or high insurance charges. Many people think that might happen fairly soon.

It’s easy to see why, as human drivers kill 1.2 million people around the world every year, and injure many millions more. If we get a technology that does much better, would we not want to forbid the crazy risk of driving? It is one of the most dangerous things we commonly do, perhaps only second to smoking. Even if this is going to happen, it won’t happen soon. There are occasional exceptions, though usually only if they are easy to do. While I often talk about the horrible death toll, and how bad human drivers are, the reality is that this is an aggregation over a lot of people.