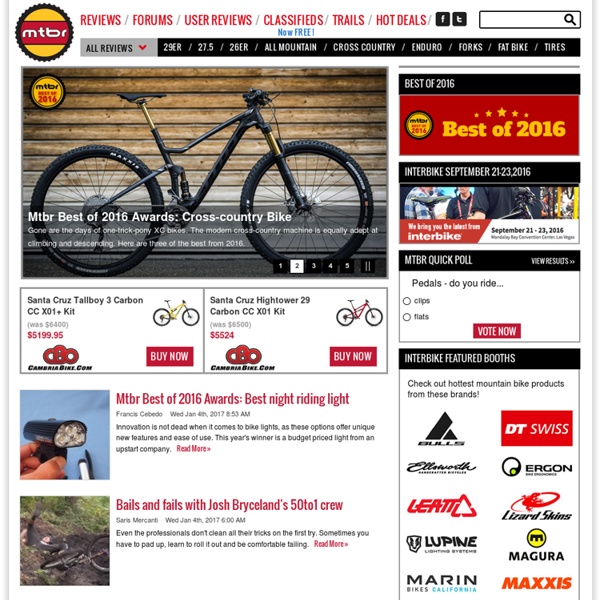 cyclingweekly.co Frame builder, mountain bike pioneer, component, wheel and tyre designer, consultant with Trek Bicycle and a hell of a cook, Keith Bontrager has been at the pointy end of the bike industry for over 30 years. A former motocross racer who also tuned engines, Bontrager started building road frames in the late 1970s. He then made some of the earliest mountain bike frames before he sold his company to Trek in 1995, who also hired him as a parts designer and consultant. But Bontrager, now an absurdly youthful looking 59-year-old with a range of experience that is unique in the bike industry, actually started out as a physicist, gaining a degree in the subject from the University of Santa Cruz. “You can look at things, at explanations and say, ‘No, that’s not right.’

Volvo Connecting Cars & Cyclists for Safer Mobility Volvo showed off its connected cyclist safety app in January. The collaborative effort is on the road to becoming a reality, which would be a milestone for the three Swedish companies behind it. Ella Williamson investigates how the app has gone from Las Vegas showroom to a commercial proposition. Volvo is shifting its safety mission into another gear—incorporating bicyclists who share the road. Volvo Cars, sports specialist POC and global telecoms firm Ericsson unveiled in January at the Consumer Telematics Show in Las Vegas a proof-of-concept that they called the “world’s first connected safety concept”. Edible Cacti And Succulents If your climate is right, edible cacti and succulents are extremely low-maintenance plants -- and delicious, too! Some people ask what the difference is between cacti and succulents. The definition of a succulent plant is one that has "thick, fleshy, water-storing leaves or stems" -- so technically a cactus IS a succulent. But most people use the term cacti to mean succulents with spines on them, and all true cacti belong to the plant family Cactaceae.

The Hub - Hublog of The Hub at Backcountry Outdoors WD-40 is not for bicycles, bike chains, bike gears, bike pulleys, bike cables nor bike tires. Nothing! WD-40 does not belong on your bike! Hydraulic brake device - Ashima Ltd. 1. Field of the Invention The present invention relates to a hydraulic brake, and more particularly to a hydraulic brake assembly used to apply opposing brake loads on the wheel rim of a vehicle such as a bicycle, a motorcycle, and the like. 2. Description of Related Art A conventional rim brake in accordance with the prior art comprises a pair of left and right arms pivotally attached to a frame of a bicycle, each having on its distal end portion a brake shoe, and a spring for energizing the arms to move toward brake releasing direction.

electric bike blog What would the first pedal cycle have looked like if its 19th-century pioneers had enjoyed access to today’s advanced materials? This modern version of an 1865 design was a demonstration by German chemical giant BASF of the wide range of modern materials they produce. 1865 was the year of BASF’s founding. It’s a one-off. You can see videos of it being ridden but they are not likely to go into production. Custom size outdoor knitted shade fabric (shadecloth) and shade netting for sun screen, shade canopy, pergola patio cover, shade sail, lanai cover, arbors, water treatment plants, or paintball netting Our high quality knitted shade sail fabrics are all UV stabilized to resist fading and last for years outdoors as pergola patio cover, lanai wrap, arbor netting, trellis shade sail, deck sunscreen, picnic or playground shading. This same shade canopy material is used for paintball field netting and in vertical applications as privacy screen, windscreen, rain and snow fencing. Cheaper, non-knitted, Woven shadecloth is only used in agricultural applications where longevity, appearance, and sag resistance are not as highly valued. We sell only the finest desert tested, Knitted shade fabric with strong, durable lockstitching to resist tearing, fraying, stretching, and sagging. Knitted sun screen materials do not fall apart when cut or torn like cheaper woven, which will unravel like a screen door.

Вело магазины Харьков (google maps) (ms ve) Bike-Pro Sport Scott, Schwinn, Mongoose BikeHacks Reader Matteo recently contacted us and noted that he had turned an old wheel into a ceiling light. His bike deco hack kicked my brain into search mode for another post along the same lines, and before I knew it was in full search mode for hacks we have posted related to decorations made from bike parts. A bunch of time typing and mousing through memory lane resulted in this cumulative post. If you have a bike deco hack you would like to have featured on bikehacks.com let us know.

In pictures: Hidden gems from Interbike 2013 - Images The busy trade show floor at Interbike 2013 Image Gallery (41 images) If you've visited Gizmag at all within the past several days, then you're likely aware that we attended the Interbike trade show in Las Vegas last week. While we've already posted a number of articles on products that we saw there, we came across many more interesting items that we still haven't told you about. We've compiled a gallery of those various doo-dads here, for your gawking pleasure.

Wind Power Generators Annual Output (KWH/year) = 0.01328 (D^2) (V^3) source... Where D^2 is the blade diameter in feet squared, and V^3 is the wind velocity cubed in mph -- this is the year round average wind speed -- see wind maps below. So, a 10 ft diameter wind turbine in 12 mph average winds might produce about (0.01328)(10^2)(12^3) = 2300 KWH/year Note that the energy produced is proportional to the cube of wind speed -- having enough average wind speed is everything in wind turbines. Use the wind maps discussed below and a wind survey of your site to determine if a wind turbine will actually payoff. The graph is of the wind energy equation shown above for various wind speeds and turbine blade diameters

Improving Chain Lubrication The majority of chains used in industry suffer unnecessarily short lives. This leads many companies to forego chains all together and replace them with belts. In most cases, however, the problem is not the fault of the chains but rather the method in which they are lubricated. The current chain lubrication practice consists of applying a heavy oil or grease to the outside of the chain. While this does a nice job of lubricating the sprockets and the outside of the chain, it does little to protect the most vulnerable area of the chain: the contacting surfaces inside the pin and bushing/ plate/ roller/ hook. The majority of chains fail from the inside.

Top 10 cycling innovations of 2014 Bicycle historians, take note – it's time once again to look back at 10 of the bike-related products that most caught our attention over the past year! As with our lists from 2012 and 2013, these aren't necessarily things that we think are destined to be big sellers. In fact, it's entirely possible that this might be the last you hear of many of them. Wind Power Generators Annual Output (KWH/year) = 0.01328 (D^2) (V^3) source... Where D^2 is the blade diameter in feet squared, and V^3 is the wind velocity cubed in mph -- this is the year round average wind speed -- see wind maps below. So, a 10 ft diameter wind turbine in 12 mph average winds might produce about (0.01328)(10^2)(12^3) = 2300 KWH/year Note that the energy produced is proportional to the cube of wind speed -- having enough average wind speed is everything in wind turbines.