Dutch to experiment with self-driving cars that cooperate with each other. Ministers have approved the large-scale testing of self-driving cars and trucks on public roads in the Netherlands arguing the technology could cut jams, improve road safety and reduce pollution. 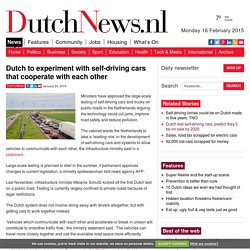 The cabinet wants the Netherlands to take a ‘leading role’ in the development of self-driving cars and systems to allow vehicles to communicate with each other, the infrastructure ministry said in a statement. Large-scale testing is planned to start in the summer, if parliament approves changes to current legislation, a ministry spokeswoman told news agency AFP. Last November, infrastructure minister Melanie Schultz kicked off the first Dutch test on a public road. Testing is currently largely confined to private roads because of legal restrictions. The Dutch system does not involve doing away with drivers altogether, but with getting cars to work together instead. The Netherlands to become a test country for self-driving cars. News item | 23-01-2015 The Netherlands will become a testing ground for self-driving vehicles. 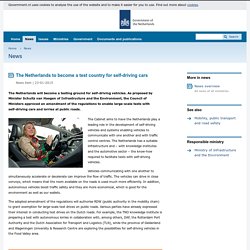 As proposed by Minister Schultz van Haegen of Infrastructure and the Environment, the Council of Ministers approved an amendment of the regulations to enable large-scale tests with self-driving cars and lorries at public roads. The Cabinet aims to have the Netherlands play a leading role in the development of self-driving vehicles and systems enabling vehicles to communicate with one another and with traffic control centres. Gabriel Plassat. Le numérique tisse des liens privilégiés avec les usagers des transports, les citoyens, les automobilistes. 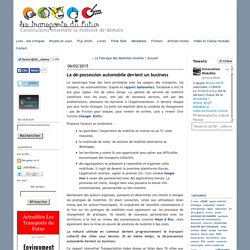 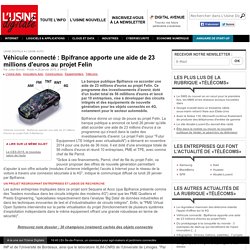 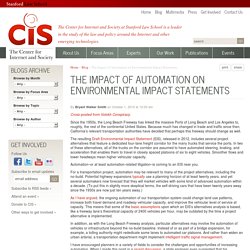 Since the 1950s, the Long Beach Freeway has linked the massive Ports of Long Beach and Los Angeles to, roughly, the rest of the continental United States. Because much has changed in trade and traffic since then, California’s relevant transportation authorities have decided that perhaps this freeway should change as well. The resulting Draft Environmental Impact Statement (EIS), released in 2012, includes several project alternatives that feature a dedicated four-lane freight corridor for the many trucks that service the ports.

International Cooperation. Over the past years, many VRA initiatives have emerged in different regions of the world. 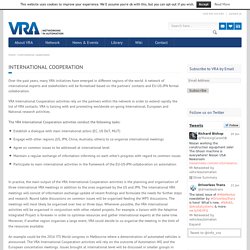 A network of international experts and stakeholders will be formalised based on the partners’ contacts and EU-US-JPN formal collaboration. VRA International Cooperation activities rely on the partners within the network in order to extend rapidly the list of VRA contacts. VRA is liaising with and promoting worldwide on-going International, European and National research activities.

The VRA International Cooperation activities conduct the following tasks: The Impact of Automation on Environmental Impact Statements. An ethical dilemma: When robot cars must kill, who should pick the victim? Image credit: Craig Berry We are moving closer to having driverless cars on roads everywhere, and naturally, people are starting to wonder what kinds of ethical challenges driverless cars will pose. 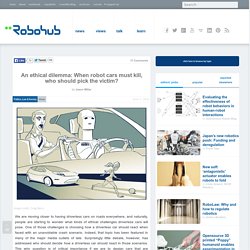 One of those challenges is choosing how a driverless car should react when faced with an unavoidable crash scenario. Indeed, that topic has been featured in many of the major media outlets of late. Planning for the Obsolescence of Technologies Not Yet Invented. Cross-posted from The Volokh Conspiracy. 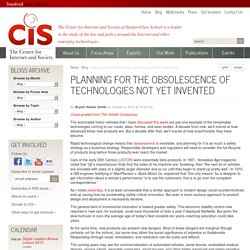 The automated motor vehicles that I have discussed this week are just one example of the remarkable technologies coming to our roads, skies, homes, and even bodies. A decade from now, we’ll marvel at how advanced these new products are. But a decade after that, we’ll marvel at how anachronistic they have become. Rapid technological change means that obsolescence is inevitable, and planning for it is as much a safety strategy as a business strategy. Responsible developers and regulators will need to consider the full lifecycle of products long before those products ever reach the market. Cars of the early 20th Century (JSTOR) were essentially beta products. Gain practical experience with intelligent transport systems (ITS) 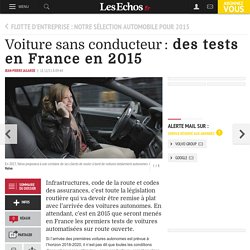 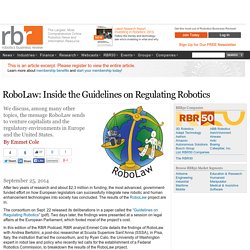 By Emmet Cole September 25, 2014 After two years of research and about $2.3 million in funding, the most advanced, government-funded effort on how European legislators can successfully integrate new robotic and human enhancement technologies into society has concluded. The results of the RoboLaw project are in. The consortium on Sept. 22 released its deliberations in a paper called the “Guidelines on Regulating Robotics” (pdf).

Gabriel Plassat. CP%20Coyote%20Assure.pdf. VENTURER consortium to test driverless cars in Bristol region. The VENTURER consortium has secured funding from Innovate UK to test driverless cars in the Bristol region. This appointment follows today’s Autumn statement announcement to make the UK a world centre for the testing and development of this new technology. VENTURER is made up of organisations in the South West which includes Atkins, Bristol City Council, South Gloucestershire Council, AXA, Williams Advanced Engineering, Fusion Processing, Centre for Transport and Society, University of the West of England (UWE Bristol), University of Bristol and Bristol Robotics Laboratory, a collaboration between the University of Bristol and UWE Bristol.

Self-driving vehicles are those in which operation of the vehicle occurs without direct driver input to control the steering, acceleration, and braking and are designed so that the driver is not expected to constantly monitor the roadway while operating in self-driving mode. NHTSA's policy addresses: The policy statement also describes NHTSA's research efforts related to autonomous vehicles. Www.ecostand-project.eu/assets/Uploads/Documents/Presentations/110630ViennaSymposiumSMART64.pdf. Steven Poole – On algorithms. Can we design machines to automate ethics? – Tom Chatfield. The Ethics of Autonomous Cars. If a small tree branch pokes out onto a highway and there’s no incoming traffic, we’d simply drift a little into the opposite lane and drive around it. But an automated car might come to a full stop, as it dutifully observes traffic laws that prohibit crossing a double-yellow line.

This unexpected move would avoid bumping the object in front, but then cause a crash with the human drivers behind it. Should we trust robotic cars to share our road, just because they are programmed to obey the law and avoid crashes? The Robotics Revolution. Whether it is a report about the latest drone strike into Pakistan or an awesome web video of a cute robot dancing in the latest style, it seems like robots are taking over the world, figuratively if not yet literally. But within their growing appearance in the news is perhaps something bigger, a story that is reshaping the overall history of war and politics, and even humanity. Where are we now? While unmanned systems have a long history, dating back to Da Vinci’s designs for a robotic knight and including things like German remote-controlled torpedo boats in the First World War, it wasn’t until just a decade ago that they truly took off in war. Advances in technology made unmanned systems more usable, especially through the incorporation of GPS technology that allowed such systems to locate themselves in the world.

Then click on personal schedule below to generate your customized schedule. All SessionsCompanies. There are real and present dangers around the Internet of Things. As with any buzz topic in the tech world, there’s a lot of bunkum around the Internet of Things. And in the security sphere, there’s much unnecessary FUD - Fear, Uncertainty and Doubt – spread by industry vendors to get people suitably scared so they splash cash on purportedly necessary protection.

Take the case of the spamming refrigerator. Researchers suggested the smart fridge had been compromised to relay reams of annoying emails, as often happens to normal PCs. Yet Symantec discovered the fridge was simply on the same network and using the same IP address as a hacked Windows PC, which was really the thing responsible for the spam. Why it is not possible to regulate robots. There's an old joke about the sciences: biology is just applied chemistry, chemistry is just applied physics, and physics is just applied maths. It's really a neat little quip about essentialism and reductionism. We must be sure that robot AI will make the right decisions, at least as often as humans do. A Town Where Drivers Aren’t Needed. Driverless Carts Are Coming Sooner Than Driverless Cars. Le véhicule autonome bientôt sur les routes de quatre villes britanniques. Dès le 1er janvier 2015, Bristol, Coventry, Greenwich et Milton Keynes testeront les véhicules autonomes sur leurs routes.