SRAM / Sachs Internal Gear Hub Service. Above left is a SRAM Spectro 7 hub sold by us with added lubrication after 2 1/2 years riding 4 days per week. 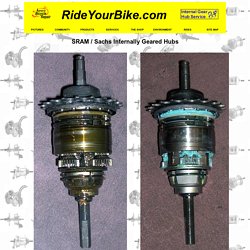 On the right is the same guts cleaned and relubricated. We recommend doing this service yearly, but this is a testament to proper lubrication. This hub would have been rusty and worn if only the factory lubrication had been used. We have imported all the repair & common wear parts for the SRAM Spectro 7 & Pentasport 5 speed hubs. Hydraulic brake device - Ashima Ltd. 1. 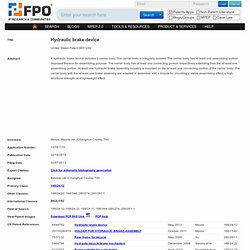 Field of the Invention The present invention relates to a hydraulic brake, and more particularly to a hydraulic brake assembly used to apply opposing brake loads on the wheel rim of a vehicle such as a bicycle, a motorcycle, and the like. 2. Description of Related Art. Wheel Builder « James Moore. BikeHacks. Reader Matteo recently contacted us and noted that he had turned an old wheel into a ceiling light. 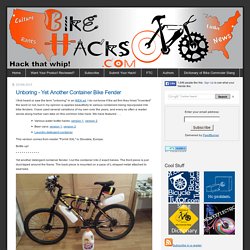 His bike deco hack kicked my brain into search mode for another post along the same lines, and before I knew it was in full search mode for hacks we have posted related to decorations made from bike parts. A bunch of time typing and mousing through memory lane resulted in this cumulative post. If you have a bike deco hack you would like to have featured on bikehacks.com let us know. 1.

Rim Ceiling Light - Vintage Reader Matteo sent along this ceiling light he created which is featured on his website. Bicycle Design - The blog about industrial design in the bike industry. Models. Build a Bicycle Frame. 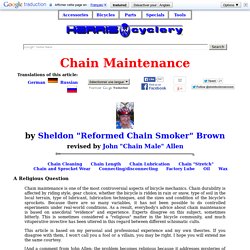 Chain durability is affected by riding style, gear choice, whether the bicycle is ridden in rain or snow, type of soil in the local terrain, type of lubricant, lubrication techniques, and the sizes and condition of the bicycle's sprockets. Because there are so many variables, it has not been possible to do controlled experiments under real-world conditions. As a result, everybody's advice about chain maintenance is based on anecdotal "evidence" and experience. This article is based on my personal and professional experience and my own theories. [And a comment from John Allen: the problem becomes religious because it addresses mysteries of existence, life and death (of chains...) to which there is no clear and obvious answer -- as long as the chain is exposed to dirt. On the other hand...the Sunbeam oil-bath full chain case solved this problem in 1908. Improving Chain Lubrication. The majority of chains used in industry suffer unnecessarily short lives. 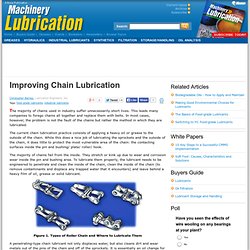 This leads many companies to forego chains all together and replace them with belts. In most cases, however, the problem is not the fault of the chains but rather the method in which they are lubricated. The current chain lubrication practice consists of applying a heavy oil or grease to the outside of the chain.

Bike Tech Area — Vancruisers.ca. Grease Selection: Lithium vs. Lithium Complex. According to a recent NLGI Grease Production Survey, approximately 70 percent of the grease sold worldwide is based on either simple lithium soap or lithium complex thickener. 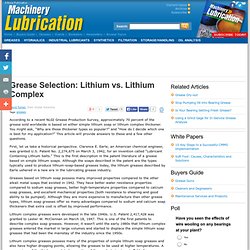 You might ask, “Why are those thickener types so popular?” And “How do I decide which one is best for my application?” This article will provide answers to these and a few other questions. First, let us take a historical perspective. Clarence E. Greases based on lithium soap possess many improved properties compared to the other alkali metal soaps that existed in 1942. Lithium complex greases were developed in the late 1940s. Lithium complex greases possess many of the properties of simple lithium soap greases and also have higher dropping points, allowing the greases to be used at higher temperatures. 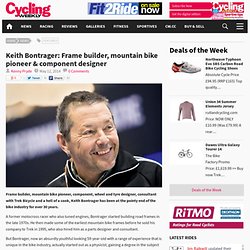 A former motocross racer who also tuned engines, Bontrager started building road frames in the late 1970s. He then made some of the earliest mountain bike frames before he sold his company to Trek in 1995, who also hired him as a parts designer and consultant. But Bontrager, now an absurdly youthful looking 59-year-old with a range of experience that is unique in the bike industry, actually started out as a physicist, gaining a degree in the subject from the University of Santa Cruz. “You can look at things, at explanations and say, ‘No, that’s not right.’ RoadBikeReview: cycling gear and road bike reviews, forums, and classifieds. The Recumbent & HPV Information Center.

Some Bikes at the Owl's Head Transportation Museum.