This new supercar will be revealed at the Shanghai Auto Show next April. The Icona Vulcano brings together different skills and expertise of a very Italian tradition. The powertrain is the work of well-known Claudio Lombardi (AIPA), former powertrain technical director of Ferrari and mastermind of numerous world champion cars: a front engine V12 two-door two-seater car, reaching up to 900 horsepower through a masterful combination of combustion engine and electric motors. The top speed will be around 350 km/h, and 0-200 km/h will be under ten seconds. Youtube. Mercedes-Benz AMG Vision Gran Turismo. Buick Riviera Concept - Auto Shows. Buick uses the Detroit auto show to show us what gets the Chinese market all fired up: the Riviera concept that was designed and engineered in China and made its world debut at the 2007 Shanghai auto show. 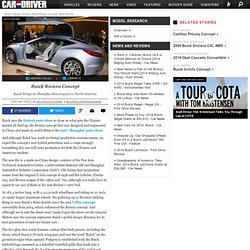 Mercedes-Benz AMG Vision Gran Turismo brings video-game design to reality. In the race to own the minds of couch-bound racers, Microsoft's Forza and Sony's Gran Turismo video game series have played a eight-year leapfrog match, with each new generation using ever-swelling oceans of polygons and physics simulators to create the most realistic worlds possible inside a game console. 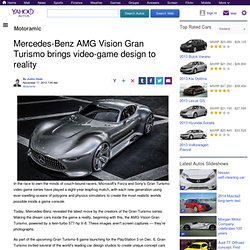 Today, Mercedes-Benz revealed the latest move by the creators of the Gran Turismo series: Making the dream cars inside the game a reality, beginning with this, the AMG Vision Gran Turismo, powered by a twin-turbo 577-hp V-8. These images aren't screen captures — they're photographs. Working in bits rather than metal frees corporate designers from the demands that all too often make concepts unworkable, and as the Red Bull X2010 showed in the previous edition of GT5, the allure of no constraints can lead to overwrought designs. It's Big, It's Bad Ass And It's Still Not Yet Ready. The $1.42 Million Bugatti 16 C Galibier.

ShareThis Bugatti has been teasing us with their 16 cylinder Galibier sedan for over 2 years now with what is said to be the world's most powerful four door luxury sedan. 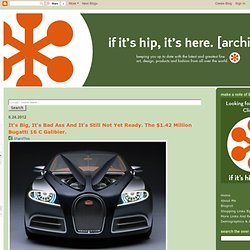 Still not given the green light for production, the French automaker launched this promotional video (with the most pretentious voiceover I've ever heard) a month ago: Rumored to have been ready for purchase by 2012, Bugatti head Wolfgang Durheimer was reportedly disappointed with the car’s levels of comfort and performance, forcing engineers to go back to the drawing board. Bloomberg is citing two unidentified sources who say the Galibier will actually be launched in 2013 or 2014 with a base price of approximately 1 million euros ($1.42 million USD). Maybach Exelero. The 2013 Geneva International Motor Show - Own. For over 100yrs, the Geneva International Motor Show has been a place for manufacturers to drop their newest and greatest creations. 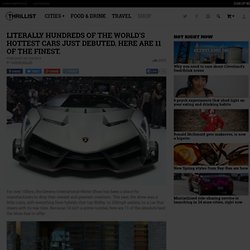 This year, the show was a little crazy, with everything from hybrids that top 900hp, to 200mph sedans, to a car that steers with its rear tires. Because 10 isn't a prime number, here are 11 of the absolute best the show had to offer: Pininfarina Sergio To commemorate the 2012 passing of their patriarch, Italian design firm Pininfarina just dropped the eponymous Sergio, in which they chopped a perfectly fine Ferrari 458 Italia (which they designed), and turned it into... this. 1969 Chevrolet Corvette Twin-turbo 565cid for Sale - 800896. The Corvette Story. Americans do love their Corvettes. 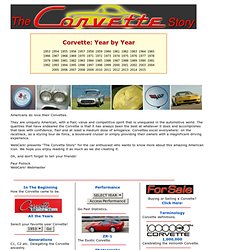 They are uniquely American, with a flair, value and competitive spirit that is unequaled in the automotive world. The qualities that have endeared the Corvette is that it has always been the best at whatever it does and accomplishes that task with confidence, flair and at least a medium dose of arrogance. Corvettes excel everywhere: on the racetrack, as a styling tour de force, a boulevard cruiser or simply providing their owners with a magnificent driving experience. Efijy. EFIJY is all about fun, emotion and imagination. 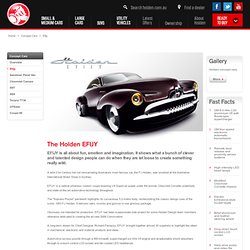 It shows what a bunch of clever and talented design people can do when they are let loose to create something really wild. A wild 21st Century hot rod reincarnating Australia's most famous car, the FJ Holden, was unveiled at the Australian International Motor Show in Sydney. EFIJY is a radical pillarless custom coupe boasting V8 Supercar power under the bonnet, Chevrolet Corvette underbody and state-of-the-art automotive technology throughout.

The "Soprano Purple" paintwork highlights its curvaceous 5.2-metre body, reinterpreting the classic design cues of the iconic 1953 FJ Holden. It delivers retro, mumbo and gizmos in one glorious package. Incredible Gallery of Art Deco Vehicles. Jul 27, 2010 1938 Delahaye 135 MS Torpedo Roadster Embracing a variety of influences from Neoclassical, to cubism, to modernism; Art Deco flourished in the 1920s and 1930s, affecting all areas of design. 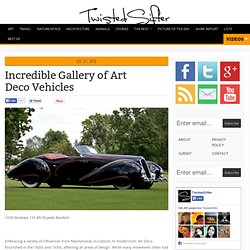 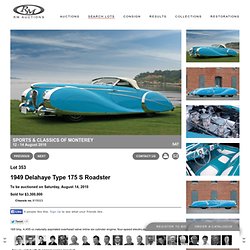