Zen and the Art of Motorcycle Maintenance 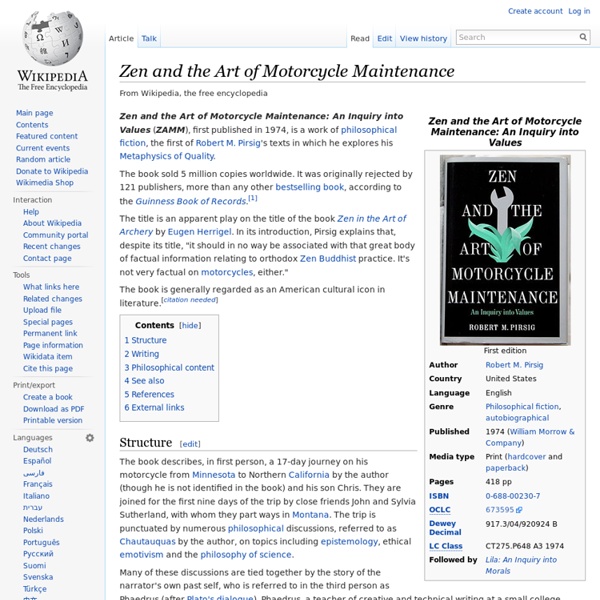 Zen and the Art of Motorcycle Maintenance: An Inquiry into Values (ZAMM), first published in 1974, is a work of philosophical fiction, the first of Robert M. Pirsig's texts in which he explores his Metaphysics of Quality. The book sold 5 million copies worldwide. It was originally rejected by 121 publishers, more than any other bestselling book, according to the Guinness Book of Records.[1] The title is an apparent play on the title of the book Zen in the Art of Archery by Eugen Herrigel. The book is generally regarded as an American cultural icon in literature. Structure[edit] The book describes, in first person, a 17-day journey on his motorcycle from Minnesota to Northern California by the author (though he is not identified in the book) and his son Chris. Towards the end of the book, Phaedrus's personality begins to re-emerge and the narrator is reconciled with his past. Writing[edit] Philosophical content[edit] The Sutherlands represent an exclusively romantic attitude toward the world. Related:  Literature/to read • literature

Charles Bukowski: Depression and Three Days in Bed Can Restore Your Creative Juices (NSFW) Pico Iyer once called Charles Bukowski the “laureate of American lowlife,” and that's because he wrote poems for and about ordinary Americans -- people who experienced poverty, the tedium and grind of work, and sometimes frayed relationships, bouts of alcoholism, drug addiction and the rest. Bukowski could write so eloquently about this because he came from this world. He grew up in a poor immigrant household with an abusive father, took to the bottle at an early age, worked at a Los Angeles post office for a decade plus, and had a long and tumultuous relationship with Jane Cooney Baker, a widow eleven years his senior, who drank to excess and died at 51, leaving Bukowski broken. And then there's the depression. To gain a more in-depth understanding of depression and its biological basis, we'd recommend watching this lecture by Stanford's Robert Sapolksy. Here's a transcript of what Bukowski has to say: I have periods where, you know, when I feel a little weak or depressed.

How to Negotiate For a Used Car A couple of months ago, I wrote about how to buy a used car. I went through all the steps except for negotiating because it’s a topic deserving of its very own post. A post which I’ll tackle today. Now to begin, here’s my honest confession: I suck at negotiating. And it becomes really apparent whenever I negotiate for big purchase items like cars. When Kate and I had to buy a “new” car last year, I stunk it up. But I punted. Thankfully, Kate is a kickass negotiator. As we drove away in our new car, I’ll admit that my manly ego was bruised. I thought, “I’m the man damnit! Perhaps that’s not too mature. So I used the experience to double down on my efforts to improve my bargaining skills. Knowledge Is Power In the negotiation game, knowledge is truly power. Meanwhile, the salesman gives away no information that would help the buyer. Who do you think’s going to get the better deal in this scenario? Know How Dealers Make Their Money Most buyers just focus on #1. How to Negotiate for a Used Car

• View topic - Conversation with E.A. Koetting about KoF I just had a great conversation with Mr. Koetting about his Grimoire Kingdoms of Flame. I am going to post the conversation between us for you all to read here as i had some questions for him regarding KoF. I am sure many of you will find it useful if you so choose to work with this book. Hello Mr. I would first and foremost like to thank you for your books and writing I have found them most helpful. (E.A.) Imagine being a demon - some schmuck calls your name and commands you to come, so you assemble a body out of the acausal matter and descend through veils of reality to appear before the kid, and when you finally materialize you find the evocator standing there saying, "Damn, nothing happened... there's no demon here!" You're looking for a demon, so you're on the right track, but now you may be looking too hard, and so like your car keys, you can't find him. You are definitely on the right path, my friend. You'll enjoy my forthcoming book, Evoking Eternity: Forbidden Rites of Evocation.

East of the Sun and West of the Moon Once upon a time there was a poor peasant who had so many children that he did not have enough of either food or clothing to give them. Pretty children they all were, but the prettiest was the youngest daughter, who was so lovely there was no end to her loveliness. One day -- it was on a Thursday evening late in the fall -- the weather was wild and rough outside, and it was cruelly dark. The rain was falling and the wind blowing, until the walls of the cottage shook. They were all sitting around the fire busy with this thing and that. "Good evening to you," said the white bear. "The same to you," said the man. "Will you give me your youngest daughter? Well, the man would not be at all sorry to be so rich; but still he thought he must have a bit of a talk with his daughter first; so he went in and told them how there was a great white bear waiting outside, who had given his word to make them so rich if he could only have the youngest daughter. The girl said "No!" No, she wasn't. "Yes!"

Jonah Lehrer's Bob Dylan quotes lead to resignation Writer Jonah Lehrer resigned from the New Yorker on Monday after admitting that he had fabricated quotes from Bob Dylan in his nonfiction book "Imagine: How Creativity Works." The book has been recalled by publisher Houghton Mifflin Harcourt. Published in March, "Imagine: How Creativity Works" has spent 17 weeks on the Los Angeles Times bestseller list. Now it will be pulled from bookstore shelves. Its e-book edition has disappeared from retail sites such as Barnes & Noble and Amazon.com. The book leans so heavily on Dylan's approach to creativity that the publisher may have had no choice. Lehrer wrote of Dylan fending off questions about his songs in 1965. Michael C. In a statement released Monday, Lehrer called his words "a lie spoken in a moment of panic." “Three weeks ago, I received an email from journalist Michael Moynihan asking about Bob Dylan quotes in my book ‘Imagine,’ ” Mr. “This is a terrifically sad situation," New Yorker Editor David Remnick told the Associated Press.

M. Lamar Keene The Psychic Mafia[edit] In 1976, Keene co-authored The Psychic Mafia, "as told to" Allen Spraggett, a well-known Canadian writer on paranormal topics. The writer William V. Rauscher, himself a believer in psychic powers,[2] contributed a foreword and a bibliography and claimed to have conducted 75 hours of interviews with Keene, during which Keene admitted that all of his psychic activities were done by fraudulent means. Keene revealed how he got rich by tricking thousands of people in séances (Randi 1995:135). In The Psychic Mafia, Keene explicitly professed a belief in God, life after death, psychic phenomena and ESP, even after making his case against true believers and renouncing his trade as a phony medium.[3] Keene and Spraggett's book caused a storm among his former associates in spiritualist circles. Keene changed his name, moved to another city, and entered the warehouse and storage business. Quotes[edit] The true-believer syndrome merits study by science. See also[edit]

East of the Sun and West of the Moon "East of the Sun and West of the Moon" is a Norwegian fairy tale. "East of the Sun and West of the Moon" was collected by Peter Christen Asbjørnsen and Jørgen Moe. It is Aarne-Thompson type 425A, the search for the lost husband; other tales of this type include "Black Bull of Norroway", "The King of Love", "The Brown Bear of Norway", "The Daughter of the Skies", "The Enchanted Pig", "The Tale of the Hoodie", "Master Semolina", "The Sprig of Rosemary", "The Enchanted Snake", and "White-Bear-King-Valemon".[1] The Swedish version is called "Prince Hat under the Ground". It is related to both the tale of "Cupid and Psyche" in The Golden Ass and to "Beauty and the Beast". It was included by Andrew Lang in The Blue Fairy Book.[2] Synopsis[edit] The White Bear approaches a poor peasant and asks if he will give him his prettiest and youngest daughter; in return, he will make the man rich. Retellings and translations into English[edit] Film adaptations[edit] See also[edit] References[edit]

On Bob Dylan And Jonah Lehrer, Two Fabulists : The Record hide captionBob Dylan at a press conference at the Savoy Hotel in London in 1966. Fiona Adams/Redferns/Getty Images Bob Dylan at a press conference at the Savoy Hotel in London in 1966. Yesterday my husband and I had the same thought at the same time. It's not an uncommon occurrence for two writers who've spent decades arguing and enthusing about pop music. I mention it, in part, to stave off accusations that I'm plagiarizing from a nearby source, but also because I think what we reflected upon in light of the writer Jonah Lehrer's fatal mistake was probably in the minds of many music obsessives. This might be obvious, but the person whose quotes Lehrer made up, Dylan, fabricated characters and quotes in his own autobiography, lied about his upbringing when he appeared on the scene, steals all the time, and is celebrated as our culture's very definition of genius. Integrity arises in the process of solidifying your relationship to those sources.

How to Buy a Used Motorcycle: 7 steps (with pictures) Edit Article Edited by SARGE, Horses4Ever, Ben Rubenstein, Brandywine and 26 others There are many considerations in the process of purchasing a used motorcycle. What type of used motorcycle do I want? Where should I look? What should I check or test on a used motorcycle? Ad Steps 1Decide what type of riding you will be doing most often: commuting, sports, touring, or a combination. 7Be realistic when negotiating on the final price of the bike. Tips If you're planning on trading in your bike to lower costs:Clean it! Warnings Motorcycling involves risk.

Peter J. Carroll Peter James Carroll (born 8 January 1953, in Patching, England) is a modern occultist, author, cofounder of the Illuminates of Thanateros, and practitioner of chaos magic theory.[1] Early life[edit] Carroll studied science at University of London and graduated with a "precisely calculated minimum pass".[2] After university, Carroll was employed as a school teacher, and spent four years in India and the Himalayas.[2] Career[edit] Carroll's 1987 book Liber Null & Psychonaut is considered one of the defining works of the chaos magic movement.[3] Carroll was a co-founder of the loosely organized group called the Illuminates of Thanateros. In 1995, Carroll announced his desire to step down from the "roles of magus and pontiff of chaos".[4] This statement was originally delivered at the same IOT international meeting which Carroll discussed in an article titled "The Ice War"[5] in Chaos International. Bibliography[edit] References[edit] Further reading[edit] Clarke, Peter Bernard (2006). Peter J.