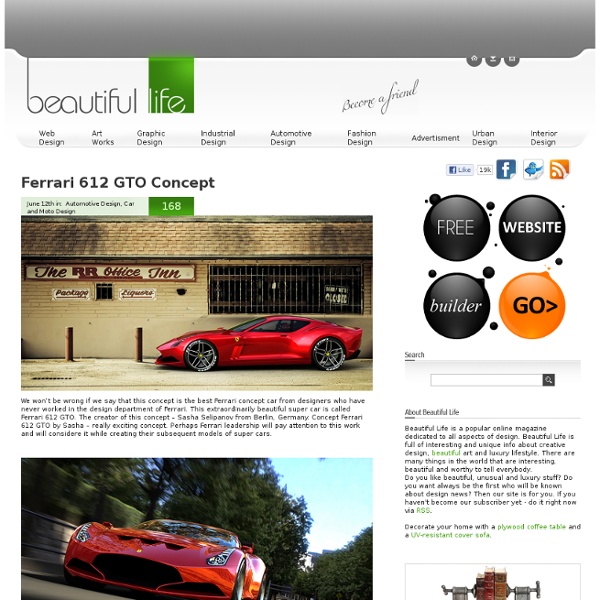 2012 Arrinera Priced at $159,770 USD, the 2012 Arrinera is a Polish-British designed supercar that boasts a 6.2-liter V8 producing 650hp and 605 lb-ft of torque, rocketing the vehicle from 0-60mph in just 3.2-seconds. Videos after the break. Click here for more pictures. The car can be fitted with a night vision camera option, which monitors the area in front of the car at the distance of a few hundred meters. If the camera detects an object with a temperature exceeding the ambient temperature, the driver can see a bright and clear image of this object on a display located in the central console within normal sight. [via SeriousWheels] Interesting Posts Around the Web

New Cars Pricing and Comparisons Local, Regional and National Car Price Reports at TrueCar Penny Auction website Gloony bid and win a bargain everyday Trouble for Detroit? Gen Y’s Favorite Cars Are Foreign A new study of Gen Y drivers’ preferences looks like more bad news for the Detroit automakers. Auto pricing site TrueCar.com tracked both the brands and individual models bought in 2009 and 2010 by Generation Y shoppers (ages 18 to 27). The results should strike fear into the hearts of U.S. auto executives: Not a single brand from a domestic automaker made the Top 10 list. Scion, a brand set up by Toyota Motor specifically aimed at young buyers, was No. 1. (See its Scion tC above right.) Mitsubishi, a name that barely registers with older shoppers, came in second. Some other brands among the top 10, such as Honda and Volkswagen, have a long record of youth appeal. Though Ford, Chrysler and the General Motors brands have enjoyed big sales gains this year, the TrueCar list portends some future trouble, as young buyers who like their first car often become loyal to that brand. Not surprisingly, seven of the top 10 models preferred by young buyers have a list price of under $20,000.

Tesla Model S "Will Be Faster Than A Porsche 911" Elon Musk, CEO of Tesla Motors, introduces customers to the Model S sedan at the company's Fremont factory. FREMONT, Calif.— Five years after shocking the automotive world by unveiling what was basically a battery-powered Lotus Elise, Elon Musk, CEO and founder of Tesla Motors, debuted his electric car company's first all-original car, the Model S, and announced that it "will build a high-performance version of the Model S that will go zero to 60 (mph) in 4.5 seconds. That's faster than a Porsche 911 Carrera." Click to view the Tesla Model S image gallery. The crowd, naturally, went wild. "The oil companies said electric cars can't work, but the truth is, they don't want them to work," Musk said. "But here it is," he continued. And here's Musk demonstrating the interior controls in the Model S: Specifications and other notes: Elon Musk

Nineties Collectibles: Mazda RX-7, Chevrolet Corvette ZR-1, GMC Syclone/Typhoon - Feature - Auto Reviews Shopping Tools Advertisement America’s “Lost Generation” of doggy cars (1974–1990) officially came to an end with the introduction of the Chevrolet Corvette ZR-1 in March 1989 in Geneva, Switzerland. Suddenly, fast was good again and an 85-mph speedo was 100 percent too slow. The performance cars produced during the 1990s are new enough, safe enough, and well built enough to drive daily. A gorgeous, lightweight, short-lived, twin-turbo rotary-engine sports car that proved to be too extreme and too expensive. One of the best sports cars of the ’90s is still largely underappreciated. Based on the Sonoma pickup, the Syclone arrived in 1991 with a 280-hp, 4.3-liter turbocharged V-6; all-wheel drive; big wheels; a body kit—and a 500-pound cargo limit. Other Stories You Might Like

2010 Nissan GT-R 2dr Coupe Premium - New Car Price Report The 2015 Nissan GT-R hasn’t been changed dramatically from the 2014 model but Nissan has attempted to make it more manageable for everyday driving. Nissan has made the GT-R’s suspension more compliant by altering the shocks and has also modified the brakes and steering to be more forgiving at lower speeds. The GT-R’s 545 horsepower engine remains untouched, and Nissan continues to offer the hyper performance Nismo version of the GT-R. The Nissan GT-R is a high-end sports car that was released in the United States in 2008. The Nissan GT-R has amazing speed, acceleration and handling. Some of the downsides, which are common in sports cars, are that the ride can feel a bit stiff at times and the vehicle is not as much fun to drive in stop and go traffic due to the performance transmission. Competition for the Nissan GT-R includes the Porsche 911, BMW M3, Chevrolet Corvette and the Audi R8. Styles and Price Powertrain Interior Style and Features Overall Assessment