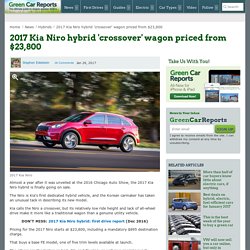 The Niro is Kia's first dedicated hybrid vehicle, and the Korean carmaker has taken an unusual tack in describing its new model. Kia calls the Niro a crossover, but its relatively low ride height and lack of all-wheel drive make it more like a traditional wagon than a genuine utility vehicle. DON'T MISS: 2017 Kia Niro hybrid: first drive report (Dec 2016) Pricing for the 2017 Niro starts at $23,800, including a mandatory $895 destination charge. That buys a base FE model, one of five trim levels available at launch. The others are the higher-end LX, EX, and Touring, as well as a special Launch Edition to commemorate the start of production. Standard equipment on the FE includes 16-inch alloy wheels, a rearview camera, 7.0-inch touchscreen display, and Apple CarPlay and Android Auto smartphone compatibility.

Hyundai Ioniq Electric car to get 200 miles of range 'soon' Hyundai's product planners seem to have a bit of an issue on their hands. 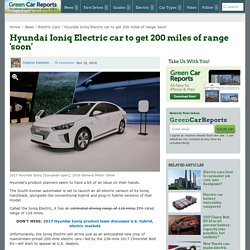 The South Korean automaker is set to launch an all-electric version of its Ioniq hatchback, alongside the conventional hybrid and plug-in hybrid versions of that model. Called the Ioniq Electric, it has an estimated driving range of 110 miles EPA-rated range of 124 miles. DON'T MISS: 2017 Hyundai Ioniq product team discusses U.S. hybrid, electric markets Unfortunately, the Ioniq Electric will arrive just as an anticipated new crop of mainstream-priced 200-mile electric cars—led by the 238-mile 2017 Chevrolet Bolt EV—will start to appear at U.S. dealers.

But Hyundai is already planning a response to that trend, it seems. It plans to launch a version of the Ioniq Electric with at least 200 miles of range by 2018, reports industry trade journal Automotive News (subscription required). Kia Niro Hybrid Crossover Is Stylish And Fun. It Also Happens To Get Great Gas Mileage. The Kia Niro Hybrid crossover is now in production. 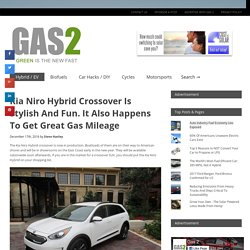 Boatloads of them are on their way to American shores and will be in showrooms on the East Coast early in the new year. They will be available nationwide soon afterwards. If you are in the market for a crossover SUV, you should put the Kia Niro Hybrid on your shopping list. Full disclosure time. I have just returned from a two day ride and drive event hosted by Kia in San Antonio. To start with, the Niro has what I consider to be the best styling of any compact crossover on the market. This is a crossover that has visual impact.

The Hyundai Sonata started the whole creased sheet metal rising along the flanks of the car look a few years back. Inside, the Kia Niro Hybrid looks and acts like a normal crossover SUV. One feature of the Kia Hybrid I found particularly pleasant was the 6 speed dual clutch transmission. Bjorn Nyland Praises The Hyundai Ioniq Electric. Cars. 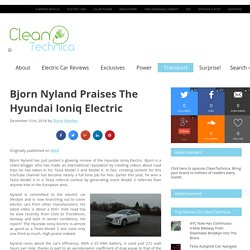 Used Nissan LEAF for Sale. Salt Water Car? – Not So Fast. The Discovery Channel is still under heavy criticism for their fake documentaries involving sharks that never existed, and mermaids. 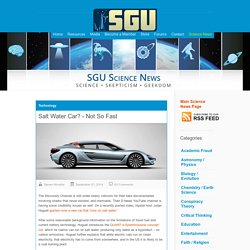 Their D News YouTube channel is having some credibility issues as well. On a recently posted video, hipster host Julian Huguet gushes over a new car that “runs on salt water.” After some reasonable background information on the limitations of fossil fuel and current battery technology, Huguet introduces the QUANT e-Sportlimousine concept car, which he claims can run on salt water, producing only water as a byproduct – no carbon emissions. Huguet further explains that while electric cars run on clean electricity, that electricity has to come from somewhere, and in the US it is likely to be a coal burning plant. Salt Water Powered Car Gets European Approval – Yes, It’s Real. Source: www.themindunleashed.org | Original Post Date: September 6, 2014 – In a breakthrough that is bound to catch the attention of the oil industry and even electric car makers, a company has just gained approval for its ‘salt water’ powered car in Europe. 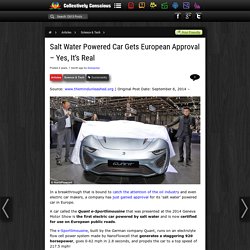 A car called the Quant e-Sportlimousine that was presented at the 2014 Geneva Motor Show is the first electric car powered by salt water and is now certified for use on European public roads. The e-Sportlimousine, built by the German company Quant, runs on an electrolyte flow cell power system made by NanoFlowcell that generates a staggering 920 horsepower, goes 0-62 mph in 2.8 seconds, and propels the car to a top speed of 217.5 mph! What is an electrolyte flow cell you ask? According to Green Car Congress, “Flow cells or flow batteries combine aspects of an electrochemical battery cell with those of a fuel cell. Deutsche Post Builds Its Own Electric Delivery Van, Volkswagen Execs Are Angry. October 8th, 2016 by James Ayre Rather than contract to an outside firm, the German logistics company Deutsche Post has gone ahead and designed and built its own electric delivery van, as we reported in April and August. 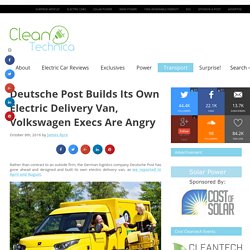 The new vehicles (1,000 of them) are already deployed in various German cities (replacing Volkswagen vans), according to recent reports. Production has now been raised to 5,000 vehicles a year, with the possibility being there to add a second shift. Interestingly, the approach was taken because “conventional vehicle makers turned down requests to build the electric vans in what are limited numbers by their standards.” Perhaps more interestingly, though, Volkswagen Group is apparently upset “beyond measure.” “I am annoyed beyond measure. New electric cars. custom mini electric vehicles. smart USA. The ultimate city car. 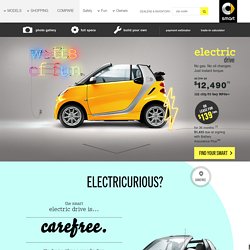 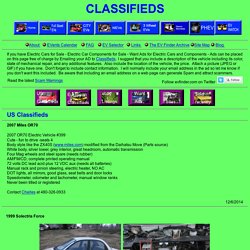