Bicycle Design - The blog about industrial design in the bike industry 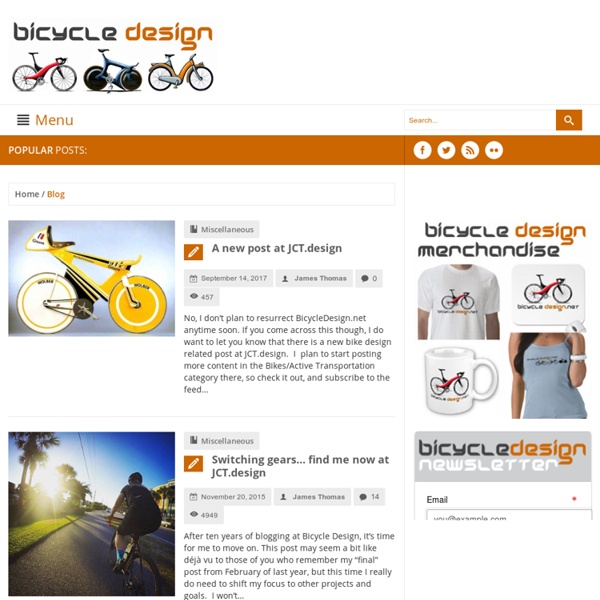 No, the Bicycle Design blog isn’t coming back (at this time at least), but I do want to share my recap of the North American Handmade Bicycle Show with any of you who are still subscribed to the feed. You can see my latest post at JCTdesign.net for a few impressions from the show, and browse through all of my NAHBS 2014 photos here. Posted in Uncategorized. By James Thomas – March 19, 2014 It is hard to pinpoint the exact reason that I started this blog in 2005. I could say that it was to showcase the work of industrial designers in the bicycle industry, or to give students a place to share their bike related ideas and concepts, or maybe the idea was just to generate discussion and get people thinking about the potential of bicycles, and other types of human powered machines, to change the world for the better.

cyclingweekly.co Frame builder, mountain bike pioneer, component, wheel and tyre designer, consultant with Trek Bicycle and a hell of a cook, Keith Bontrager has been at the pointy end of the bike industry for over 30 years. A former motocross racer who also tuned engines, Bontrager started building road frames in the late 1970s. He then made some of the earliest mountain bike frames before he sold his company to Trek in 1995, who also hired him as a parts designer and consultant. But Bontrager, now an absurdly youthful looking 59-year-old with a range of experience that is unique in the bike industry, actually started out as a physicist, gaining a degree in the subject from the University of Santa Cruz.

Custom 3D Printed Carbon Fiber Bike Frame If you’re really into cycling and are on this site, chances are that over the years you’ve at least toyed with the idea of making your own frame. There’s something truly special and deeply rewarding about riding something that you’ve built yourself, and being able to choose whatever custom geometry and extras that you want only adds to the appeal. At that point you probably looked at everything that you needed to do to make a bike. And that’s when things start to get daunting. Before you’ve even thought of the bike, you need to think about the jig. Newsletter - The Bike Shop Hub Ortlieb, Racktime, and Tubus on Sale through August 24 Have you finally realized that the racks, bags, and panniers you own are junk? No?

Hydraulic brake device - Ashima Ltd. 1. Field of the Invention The present invention relates to a hydraulic brake, and more particularly to a hydraulic brake assembly used to apply opposing brake loads on the wheel rim of a vehicle such as a bicycle, a motorcycle, and the like. 2. Description of Related Art How I Made a Carbon Fiber/Epoxy Composite Bike in my Garage, by Damon Rinard Design | Tooling | Tools and Workspace | Making the Foam Core | Materials | General Layup | Non-Standard Layups | Secondary Operations | Finishing | Proof Testing | Road Testing | Overload! | The New Beam | Sources A) Geometry. I chose geometry that I knew I would like, based on bikes I've ridden. (For more information about how to choose frame geometry, see framebuild.htm.) This bike is a normal road bike: 59cm seat tube, 57cm top tube, average bottom bracket height, etc.

Labor Day Weekend with Uncle Jumbo This is Labor Day weekend here in the USA. Much of the rest of the world celebrates International Workers Day in May, but that was a little too commie for President Grover Cleveland. Besides, it conflicts with Bike Month, and everybody knows that Grover Cleveland was huge into Bike Month. Actually, he was just huge. BikeHacks Reader Matteo recently contacted us and noted that he had turned an old wheel into a ceiling light. His bike deco hack kicked my brain into search mode for another post along the same lines, and before I knew it was in full search mode for hacks we have posted related to decorations made from bike parts. A bunch of time typing and mousing through memory lane resulted in this cumulative post.

The Jiggernaut-Bringing bicycle frame building to the masses by Mixed Media Engineering Thanks for checking out our project! We are excited to bring you a great DIY frame building product. The Jiggernaut is an affordable bicycle frame jig that enables anyone to build a high-quality, custom bicycle. A frame jig is an essential tool for building bike frames. There are some jigs on the market today, but most are designed with the production builder in mind and are well beyond the budget of the average person that just wants get started in bicycle building.

Casati Vinci – First Ride Review From their base in Monza, Casati design and manufacture machines that typify all that’s desirable about Italian road bikes. But the Vinci offers something different: rack and mudguard mounts. In the Vinci you have your £2,000 summer superbike, but instead of putting it away when winter approaches, you just pop on the ’guards and carry on riding. The custom-built frame features Dedacciai 7003 tubing for the front triangle and chainstays, and Dedacciai BlackRain carbon wishbone seatstays and fork to reduce the amount of vibration getting through as you ride. You can choose between standard or sloping geometry, and colourways include white, red or blue. With the pristine paintwork glistening in the rain, we headed out on familiar roads to see whether the Vinci would win us over...

Improving Chain Lubrication The majority of chains used in industry suffer unnecessarily short lives. This leads many companies to forego chains all together and replace them with belts. In most cases, however, the problem is not the fault of the chains but rather the method in which they are lubricated. The current chain lubrication practice consists of applying a heavy oil or grease to the outside of the chain. While this does a nice job of lubricating the sprockets and the outside of the chain, it does little to protect the most vulnerable area of the chain: the contacting surfaces inside the pin and bushing/ plate/ roller/ hook.