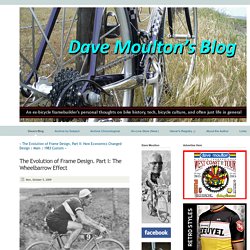 Probably the first thing most will notice is that the bike has a single fixed sprocket. Gears were available at that time; however, Tour de France riders were restricted to a single speed at the whim of Tour organizer Henri Desgrange. Desgrange felt that multiple gears were for bicycle tourists, and they took away from the purity of the sport of cycle racing. So riders had to struggle over the same mountain climbs the Tour currently goes over, with a single gear, on roads in far worse condition than today. The other thing you will notice about the bike is the long wheelbase, some 4 or 5 inches (10 to 13cm.) longer than a modern race bike, the shallow frame angles, and the long curved front fork blades.

The Bicycle - Towards a Global History - Paul Smethurst. The modern bicycle as we know it today was developed in England in the 1880s. 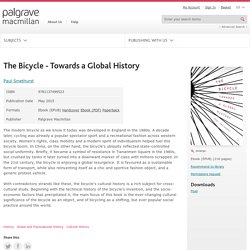 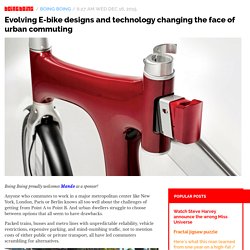 Anyone who commutes to work in a major metropolitan center like New York, London, Paris or Berlin knows all too well about the challenges of getting from Point A to Point B. And urban dwellers struggle to choose between options that all seem to have drawbacks. Packed trains, busses and metro lines with unpredictable reliability, vehicle restrictions, expensive parking, and mind-numbing traffic, not to mention costs of either public or private transport, all have led commuters scrambling for alternatives. The traditional bicycle has emerged a strong contender for favored commuter method, especially as cities become more bike friendly with special lanes for two-wheel travelers, incentive schemes to motivate would-be bikers, and even convenient rental stations that allow easy access to bikes most anywhere you might need one.

“Sweat,” says Ben Jaconelli, owner of London-based Fully Charged bike shop near London Bridge. The e-bike alternative. A history blog on the joys and perils of cycling in Victorian Britain. The Bicycle Academy : Cycle frame building school. Learn how to build a bicycle frame, keep the skills and give your first bike to someone who really needs it. 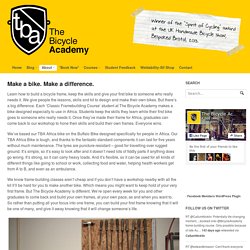 We give people the lessons, skills and kit to design and make their own bikes. But there’s a big difference. Each ‘Classic Framebuilding Course’ student at The Bicycle Academy makes a bike designed especially to use in Africa. Students keep the skills they learn while their first bike goes to someone who really needs it. Calfee Bamboo Bicycle Frames. Frame and Bike Pricing. 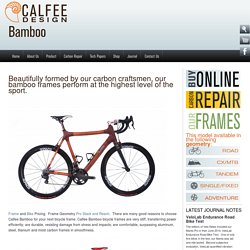 Frame Geometry Pro Stack and Reach. There are many good reasons to choose Calfee Bamboo for your next bicycle frame. The secret history of 19th century cyclists. It is not easy explaining to family and friends why you are spending a fairly considerable amount of money and a year of your life researching the social impact of the bicycle on late19th century British society. 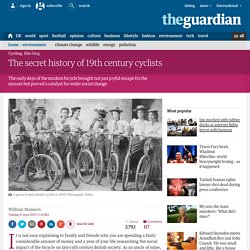 As an uncle of mine, who is himself a keen cyclist, once helpfully asked, “Why does anyone need to know anything about that?” It can be a difficult question to answer.

Bike Mechanics. Bike Lights. Cycling v cars: The American right-of-way. Is It O.K. to Kill Cyclists? Photo SAN FRANCISCO — EVERYBODY who knows me knows that I love cycling and that I’m also completely freaked out by it. 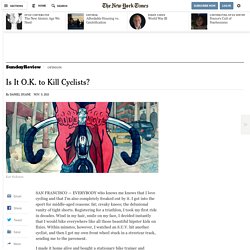 I got into the sport for middle-aged reasons: fat; creaky knees; the delusional vanity of tight shorts. Adventure journal – The Unforbidden Cyclist. Normally I wouldn’t cover Thomas Yang’s art just a few weeks after posting about it, but the last time I mentioned him, all his limited editions were sold out. 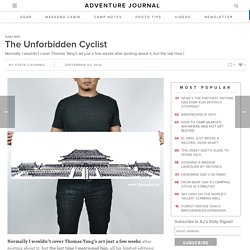 Not so now: His latest, The Unforbidden Cyclist, still has about 50 prints left. As Yang notes, China has more bicycles than any other country, and, while it was long considered a sign of the working class, not exactly a status symbol in this highly aspiration nation, it’s now in the middle of a hip resurgence. Are fixies and PBR soon to follow? Regardless, if you’re a Sinophile, take a good look. Yang makes these prints by inking 11 different bike tires and rolling them across his paper. See the print super big here. The Daily Bike is back by popular demand. What is a CycleHack? Vélo et Design, le blog des innovations du cycle.