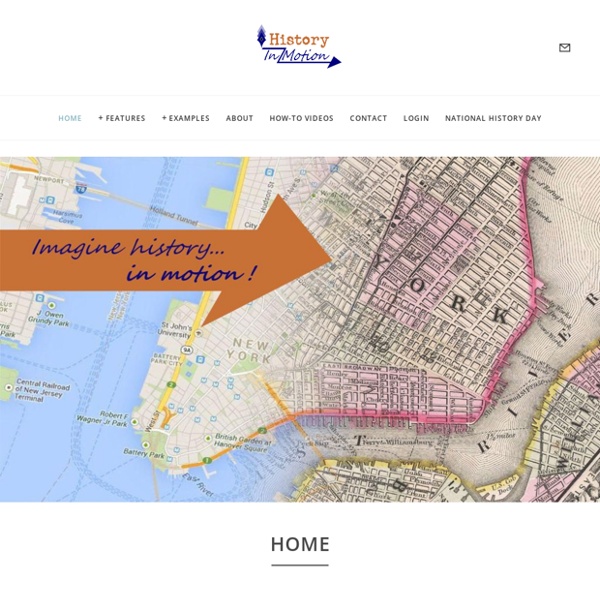 Games for people who don't play games - The Space Games can be scary – they can feel impenetrable, and like they’re all about shooting things and using controllers that look incomprehensible. It’s OK to feel that, but also, there are people making games that don’t feel like that. There’s a difference between CATS and a small piece of contemporary theatre, or independent film and Hollywood, and in the same way there’s a part of the medium ‘games’ that are producing beautiful, artistic experiences. This is a list of ten games for people in the arts who wouldn’t put their hand up when asked "do you play games?" All of them are under £18, many are free or pay by donation; they feature work from various different genres and movements in games (Twine, point and click, table-top, walking simulators, political, queer); and are made by women as well as men, LGBT*Q folk, people of colour.

Download 91,000 Historic Maps from the Massive David Rumsey Map Collection Three years ago, we highlighted one of the most comprehensive map collections in existence, the David Rumsey Map Collection, then newly moved to Stanford University. The Rumsey Collection, we wrote then, “contains a seemingly inexhaustible supply of cartographic images”—justifiable hyperbole, considering the amount of time it would take any one person to absorb the over 150,000 physical artifacts Rumsey has amassed in one place. By 2016, Rumsey had made almost half the collection—over 67,000 images—freely available in a digital archive that has been growing since 1996. Each entry features high-resolution scans for specialists (you can download them for free) and more manageable image sizes for enthusiasts; a wealth of data about provenance and historical context; and digital, user-friendly tools that use crowd-sourcing to measure the accuracy of antiquated maps against GPS renderings.

Display resolution This chart shows the most common display resolutions, with the color of each resolution type indicating the display ratio (e.g. red indicates a 4:3 ratio). The display resolution or display modes of a digital television, computer monitor or display device is the number of distinct pixels in each dimension that can be displayed. It can be an ambiguous term especially as the displayed resolution is controlled by different factors in cathode ray tube (CRT) displays, flat-panel displays (including liquid-crystal displays) and projection displays using fixed picture-element (pixel) arrays. It is usually quoted as width × height, with the units in pixels: for example, "1024 × 768" means the width is 1024 pixels and the height is 768 pixels.

The Best Way to Make Arcade Games - Construct 3 Create Your Games Arcade games are the bread and butter of online gaming. It's never been easier to create your own arcade games with Construct. Brimming with features designed to make it a breeze, and brimming with technology to make your games run as smooth as butter. Try Construct 3 or buy Construct 3 now!

About TAA The Textbook & Academic Authors Association (TAA) provides professional development resources, events, and networking opportunities for textbook authors and authors of scholarly journal articles and books. Established in 1987 by math author Mike Keedy, TAA is the only national, nonprofit membership association dedicated solely to assisting textbook and academic authors. TAA's name was changed from "Text and Academic Authors Association" to "Textbook & Academic Authors Association" in 2016 to offer a clearer identity for TAA in light of the new meaning of "texting" on smart devices today. Worlds Revealed: Geography & Maps at The Library Of Congress This is a guest post by Kelly Bilz, Librarian-in-Residence in the Geography and Map Division. Even though Latin had fallen out of vernacular use after the fall of Rome (and began to evolve into the modern Romance languages), it lived on in its written form, becoming the lingua franca, so to speak, of scholarship. In particular, western cartographers during the Renaissance used Latin in their maps, resulting in a large collection of maps in the Geography and Map Division written in this ancient language. Seeing these polysyllabic words in a long list of search results can be disorienting; fortunately, being familiar with a couple key terms can help you navigate Latin titles with ease– without having to study Latin for eight years, as I did! Mappa totius mundi : adornata juxta observationes dnn. academiae regalis scientiarum et nonnullorum aliorum secundum annotationes recentissimas.

Modern and Contemporary Furniture Molecule Design is Santa Fe’s place where the newest, most innovative ideas in contemporary and new modern home decor products are discovered, housed, and showcased. Molecule’s founder, Adriana Siso is motivated by fresh ideas for living, how we use our spaces, and the objects in them. This can include an appreciation for technological practices and new materials that bring new attitudes about space or objects of use. Molecule Design keeps an active schedule featuring the work of local designers, fabricators and artists, as well as national and international design firms.

Apple Plans to Use Its Own Chips in Macs From 2020, Replacing Intel Apple Inc. is planning to use its own chips in Mac computers beginning as early as 2020, replacing processors from Intel Corp., according to people familiar with the plans. The initiative, code named Kalamata, is still in the early developmental stages, but comes as part of a larger strategy to make all of Apple’s devices -- including Macs, iPhones, and iPads -- work more similarly and seamlessly together, said the people, who asked not to be identified discussing private information. The project, which executives have approved, will likely result in a multi-step transition. The shift would be a blow to Intel, whose partnership helped revive Apple’s Mac success and linked the chipmaker to one of the leading brands in electronics. Apple provides Intel with about 5 percent of its annual revenue, according to Bloomberg supply chain analysis. Intel shares dropped as much as 9.2 percent, the biggest intraday drop in more than two years, on the news.