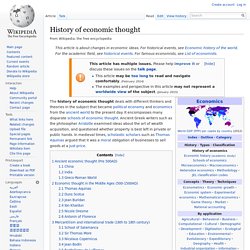 It encompasses many disparate schools of economic thought. Ancient Greek writers such as the philosopher Aristotle examined ideas about the art of wealth acquisition, and questioned whether property is best left in private or public hands. In medieval times, scholastic scholars such as Thomas Aquinas argued that it was a moral obligation of businesses to sell goods at a just price.

Ancient economic thought (Pre 500AD)[edit] China[edit] History of Economic Thought. History of Economics. Chronology of Money Timeline. Because of the difficulties of conducting experiments in the ordinary business of economic life, at the centre of which is money, it is most fortunate that history generously provides us with a proxy laboratory, a guidebook of more or less relevant alternatives. 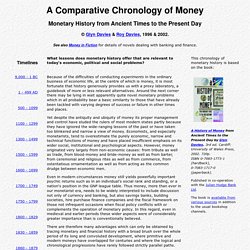 Around the next corner there may be lying in wait apparently quite novel monetary problems which in all probability bear a basic similarity to those that have already been tackled with varying degrees of success or failure in other times and places. Yet despite the antiquity and ubiquity of money its proper management and control have eluded the rulers of most modern states partly because they have ignored the wide-ranging lessons of the past or have taken too blinkered and narrow a view of money.

Economists, and especially monetarists, tend to overestimate the purely economic, narrow and technical functions of money and have placed insufficient emphasis on its wider social, institutional and psychological aspects. American History Timeline: 1780-2010.