Creating Chaos: Time to Learn From Our Mistakes. Yesterday’s New York Times had an article noting that the head of the UN Mission in Libya fears “the country is very close to total chaos.” 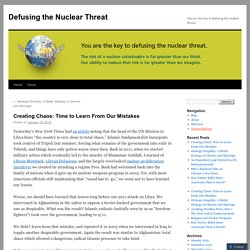 Islamic fundamentalist insurgents took control of Tripoli last summer, forcing what remains of the government into exile in Tobruk, and things have only gotten worse since then. Back in 2011, when we started military action which eventually led to the murder of Muammar Gaddafi, I warned of Libyan Blowback, Libyan Delusions, and the largely overlooked nuclear proliferation incentives we created by attacking a regime Pres. Bush had welcomed back into the family of nations when it gave up its nuclear weapons program in 2003. Yet, with most American officials still maintaining that “Assad has to go,” we seem not to have learned our lesson. Worse, we should have learned that lesson long before our 2011 attack on Libya.

We didn’t learn from that mistake, and repeated it in 2003 when we intervened in Iraq to topple another despicable government. Syria toll rises to 136,000 after bloody month: activists. BEIRUT: More than 136,000 people have been killed since the beginning of the Syrian conflict in March 2011, with January one of the bloodiest months on record, an NGO said Saturday. 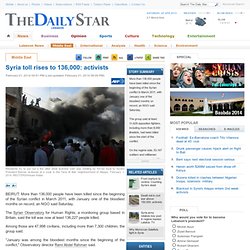 Among those are 47,998 civilians, including more than 7,300 children, the group said. "We in the Syrian Observatory for Human Rights will continue to call on all actors on the international stage to do their humanitarian and moral duty to press for the Syrian file to be referred to the International Criminal Court," the group said in a statement. The group said it sought "the trial of the murderers of the Syrian people, and those who have collaborated with them".

The Observatory's last toll, at the end of December, stood at 130,433, but fierce fighting between rebels and the regime, as well as between rebels and jihadists, has claimed nearly 6,000 lives since then. The group said at least 31,629 opposition fighters, including more than 8,000 jihadists, had been killed since the start of the conflict. Syrie : le régime accusé de torture à grande échelle. 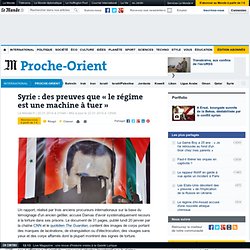 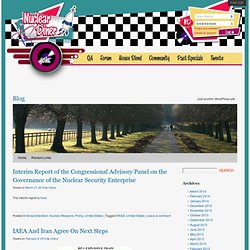 Suddenly, people who know something about how to destroy chemical weapons were in demand. And there were a lot of instant experts, some of whom were pretty confused. Back in the late 1980s, I managed a project on supercritical water oxidation, which destroys hazardous compounds very completely. At that time, the chemical weapons programs were looking for ways to destroy their stocks. They found out about our project, and I spent about a year working with Tooele Army Depot. But I got a tour of the Tooele facility, which required a gas mask fitting and training in how to use atropine self-injectors. Iran ex-president says Syria govt launched gas attacks: news agency.

BEIRUT/ DUBAI: An Iranian news agency quoted former president Akbar Hashemi Rafsanjani as saying Syria's government had attacked its own people with chemical weapons, but later replaced the report with a different version that did not attribute blame for the raid. 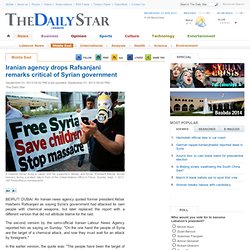 The second version by the semi-official Iranian Labour News Agency reported him as saying on Sunday: "On the one hand the people of Syria are the target of a chemical attack, and now they must wait for an attack by foreigners. " In the earlier version, the quote was: "The people have been the target of a chemical attack by their own government and now they must also wait for an attack by foreigners. " However, a spokesman for the former president denied Saturday that Rafsanjani had ever made the remarks, saying his comments had been "distorted. " "Mr. "Mr. Soleimani was forced to deny the comments after they appeared on the Facebook page of Naeimeh Eshraghi, the granddaughter of Ayatollah Ruhollah Khomenei. Bravant les tabous, des Syriens soignés dans des hôpitaux israéliens. 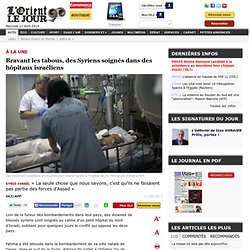 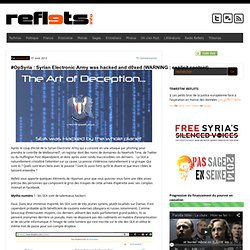 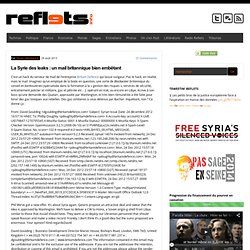 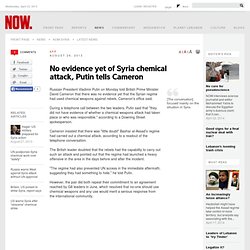 During a telephone call between the two leaders, Putin said that "they did not have evidence of whether a chemical weapons attack had taken place or who was responsible," according to a Downing Street spokesperson. Cameron insisted that there was "little doubt" Bashar al-Assad's regime had carried out a chemical attack, according to a readout of the telephone conversation. The British leader doubted that the rebels had the capability to carry out such an attack and pointed out that the regime had launched a heavy offensive in the area in the days before and after the incident. Syrian regime forces attack Homs. Insight: Saudi edges Qatar to control Syrian rebel support. The Muslim Brotherhood Prepares for a Comeback in Syria. Syrie : la diplomatie française en échec - Pale Moon. L'accord entre Moscou et Washington pour réunir une conférence internationale marginalise l'action de la France, qui a fait du départ de Bachar el-Assad une priorité absolue. 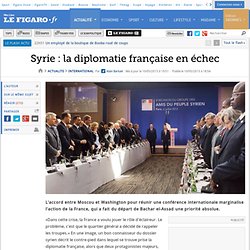 However, activists say the minaret was hit by Syrian army tank fire. The mosque, which is a Unesco world heritage site, has been in rebel hands since earlier this year but the area around it is still contested. Last October Unesco appealed for the protection of the site, which it described as "one of the most beautiful mosques in the Muslim world". Rund 60 Männer aus Österreich kämpfen im Syrien-Krieg - "Jihad-Tourismus" - Österreich. Der Weg der "Jihad- Touristen" führt laut einem Bericht der Tageszeitung "Die Presse" meist über die Türkei. Dort verliere sich ihre Spur. Démission du président de la Coalition nationale syrienne - Pale Moon. Russia criticises Arab League over Syria seat - Europe - Al Jazeera English - Pale Moon. Russia has harshly criticised the Arab League's recognition of the Syrian opposition as the only representative of the country, saying it effectively kills efforts to negotiate a peaceful end to the civil war in Syria.

Assad regime ally, Russia, also said on Thursday it would strongly oppose any bid to give Syria's UN seat to the opposition. UN agency 'broke' as Syria refugee funds run out. 2013-04-21 Syrie : le chef de l'opposition démissionne de nouveau - Pale Moon. Le chef de l'opposition syrienne, Ahmed Moaz Al-Khatib, a soumis pour la deuxième fois sa démission. M. All signs point to no lethal chemical weapons attack in Syria - CSMonitor.com - Pale Moon. An alleged chemical weapons attack near Aleppo yesterday, for which the Syrian regime and the opposition traded accusations of responsibility, almost certainly did not feature a lethal agent proscribed under international convention, say chemical weapons experts after considering the available evidence. Skip to next paragraph Subscribe Today to the Monitor. 2013-03-19 Syrian rebels 'use chemical weapon' 19 March 2013Last updated at 12:33 ET The BBC's James Reynolds says there is scepticism about the claims Syrian rebels and the government have accused each other of firing chemical weapons, reportedly killing at least 25 people in the north of the country.

A Syrian minister said it was a "dangerous escalation" and the "first act" of a new rebel authority. However, both a chemical weapons monitoring body and the US said there was no evidence they had been used. 2013-04-24 Israel Says Syria Has Used Chemical Weapons - NYTimes.com - Pale Moon. 2013-04-24 @robertburnsAP : #Hagel on why no US intel stance... 2013-04-25 Syria and Sarin. A few thoughts on where we are with the allegations of chemical weapons use in Syria. The stakes. Let’s keep in mind why we are arguing about this. The President has said that chemical weapons use would be a “game-changer” (oh, how I hate that…phrase) in Syria.

Why do we care if Assad gasses his people, when we’re perfectly willing to let him shell them with normal artillery? Our reluctance, I suspect, arises from the fact that our distaste for Assad is not the same thing as enthusiasm for who replaces him. Chemical-weapons use invokes an interest that has nothing to do with the future of Syria. Rebels use China missiles to shoot down Syrian army helicopters. Chinese-made missiles have been used to shoot down two Syrian army helicopters, state media reported on Thursday, adding their performance could boost the international sales appeal of Chinese weapons.

The Global Times, a tabloid with close links to the ruling Communist Party, said a pair of videos posted on the internet by Free Syrian Army rebels showed two Mi-8/17 helicopters being shot down by Chinese shoulder-launched missiles. The paper said it was not known how the rebels, who have been fighting to topple the Syrian government of President Bashar al-Assad for the past two years, obtained the missiles. But it said the success of the FN-6 weapons, which it said were developed by China Aerospace Science and Technology Corporation, could lift the overall image of China’s defence products.

Jihadists and Secular Activists Clash in Syrian Town. Update: Cluster Munitions in Syria (ZAB-2.5 incendiary submunitions) « The Rogue Adventurer. RBK-250 cluster bombs, containing ZAB-2.5 submunitions, have recently been identified in Syria. There has been a lot of confusion surrounding both the cluster munitions themselves, and the submunitions, with contrasting and conflicting claims. First and foremost, it is important to note that the RBK-250 ZAB-2.5 250kg cluster bomb, as sighted in Syria, contains three different variations of ZAB-2.5 submunitions: one with an incendiary (thermite) composition, one with a thermite + high explosive composition, and one with a thermite + jellied incendiary composition.

Iran confirms it has forces in Syria and will take military action if pushed. Iran has confirmed for the first time that forces from its revolutionary guards corps (IRGC) are in Syria helping Bashar al-Assad's government crush rebels, and warned that it would get involved militarily if its Arab ally came under attack. In a clear public signal of Tehran's continuing support for Assad, the commander of the Islamic republic's elite military formation said that a number of members of the IRGC's Qods force were in Syria, though General Mohammad Ali Jafari gave no further details and claimed this did not constitute "a military presence". It was a surprisingly candid response to persistent claims by western countries, the Syrian opposition and Israel that Iran is actively helping the regime in the 18th month of a bloody war.

U.N. Details Flows of Syrian Refugees. Syrie : on doit faire plus. Georgieva met la pression sur les gouvernements. China's foreign minister expresses worry about Syria. BEIJING: Chinese Foreign Minister Yang Jiechi has told the new U.N. special envoy for Syria that Beijing is increasingly concerned about the worsening situation in the conflict-ridden Middle Eastern country. Yang made the comments late Friday during a telephone conversation with Lakhdar Brahimi, according to a statement posted on the ministry's website. Yang said the situation in Syria was growing more severe by the day, and that China is deeply worried and is closely following the humanitarian situation there, according to the statement.

He also welcomed Brahimi, a former Algerian foreign minister, to his new post and said China supports him in his efforts to realize a political resolution to the crisis, the statement said. Brahimi succeeded former United Nations secretary-general Kofi Annan in the post as U.N.

Syrian rebels and the West