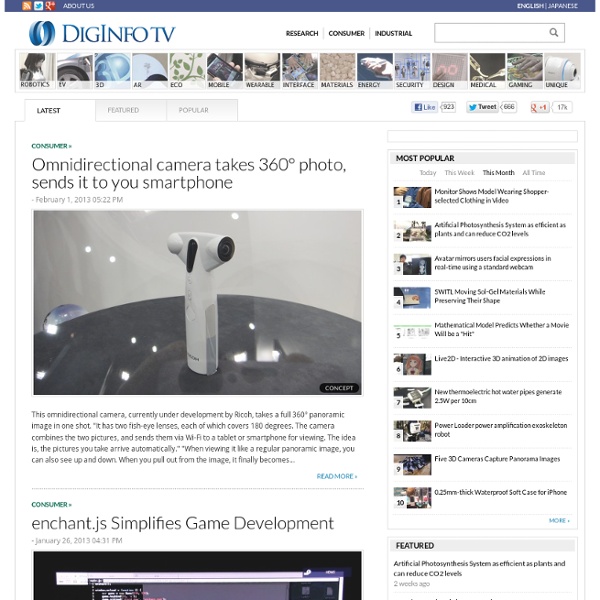 Effects of meal frequency and high-fibre rye... [Eur J Clin Nutr. 2004 Opinions Libres, le blog d'Olivier Ezratty Applied Science: les éditions volumiques Accelerating Future There isn’t enough in the world. Not enough wealth to go around, not enough space in cities, not enough medicine, not enough intelligence or wisdom. Not enough genuine fun or excitement. Not enough knowledge. What we need is more . There is a bare minimum that we should demand out of the future. 1) More space 2) More health 3) More water 4) More time 5) More intelligence First off, we need more space . There is actually a lot of space on this earth.

Sweet Station Zemer Peled Peled was born and raised in a Kibbutz in the northern part of Israel. After completing a BA (Hons) at the Bezalel Academy of Art and Design in Jerusalem she graduated with an MA (Hons) from the Royal College of Art. In recent years her work has been featured nationally and internationally in museums and galleries including Sotheby’s and Saatchi Gallery-London, Eretz Israel Museum-Tel Aviv and the Orangerie du Senate, Paris among others. Zemer Peled’s work examines the beauty and brutality of the natural world. Her sculptural language is formed by her surrounding landscapes and nature, engaging with themes of nature and memories, identity and place. Peter Harris ” In the decade that I’ve painted the urban landscape, one name is consistently mentioned when people first encounter my work: Edward Hopper. Philippe Tyberghien ” I am a Franco/Belgian artist who works in photography and makes them look like old paintings (old or less). Mi Ju Christophe Jacrot Henn Kim Ken Lavey

TechCrunch National Geographic Keepintouch-blog Keepintouch-blog | Le blog des surfaces interactives Nutrition & Metabolism 9/11 inside job | Frontview's 9/11 Truth movement are idea’s that disagree with the widely accepted account that the September 11 attacks were perpetrated solely by al-Qaeda, without any detailed advanced knowledge on the part of any government agency. Proponents of these theories claim there are inconsistencies in the official conclusions, or evidence which was overlooked. In a 2008 global poll of 16,063 people in 17 countries, majorities in only nine countries believe al Qaeda was behind the attacks. 46% of those surveyed believed al-Qaeda was responsible for the attacks, 15% believed the U.S. government was responsible, 7% believed Israel was and another 7% believed some other perpetrator, other than al Qaeda, was responsible. The poll found that respondents in the Middle East were especially likely to name a perpetrator other than al-Qaeda. In Memory The Speech I, pet goat II Loose Change Zeitgeist, 9/11 Secrets Revealed Elephant in the Room Zero Hour 9/11 Secret Revealed Destroy 9/11 9/11 Truth 9/11 Inside Job 9/11 Attack