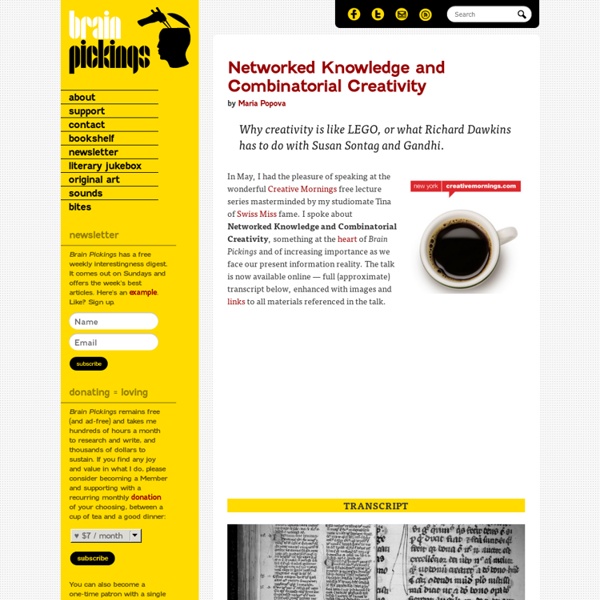 by Maria Popova Why creativity is like LEGO, or what Richard Dawkins has to do with Susan Sontag and Gandhi. In May, I had the pleasure of speaking at the wonderful Creative Mornings free lecture series masterminded by my studiomate Tina of Swiss Miss fame. I spoke about Networked Knowledge and Combinatorial Creativity, something at the heart of Brain Pickings and of increasing importance as we face our present information reality. The talk is now available online — full (approximate) transcript below, enhanced with images and links to all materials referenced in the talk. These are pages from the most famous florilegium, completed by Thomas of Ireland in the 14th century. In talking about these medieval manuscripts, Adam Gopnik writes in The New Yorker: Our minds were altered less by books than by index slips.” You may have heard this anecdote. Here’s the same sentiment from iconic designer Paula Scher on the creation of the famous Citi logo: Kind of LEGOs. And I like this last part.

On Self-Promotion You are a shameless self promoter!” he said. I can’t speak to the “shame” part, but for the rest: guilty as charged. Self-promotion may appear revolting, but it’s the only promotion that’s guaranteed in this business. Why is sustainability seen as a rollercoaster for business leaders? If you really want to know what's going on in the minds of executives when it comes to embedding sustainability, then look no further than the business coaches they pour their hearts out to. "I feel like I've been on a rollercoaster" is one of the most common complaints that executive coach John Blakey hears. Blakey, co-author of Challenging Coaching, suggests individuals' fears of being out of control, of failure, ridicule, isolation, being left behind, and of the sheer complexity and speed of work lives are among the biggest obstacles to driving the sustainability agenda forward. When Blakey hears the rollercoaster comment, he now tries to add in some humour: "I say, 'That sounds exciting. If I want to go on a rollercoaster, I have to go to Alton Towers and pay for it.'" "They get that things need change, they get that as leaders, they need to lead the change.

nervous system Humans, like all living organisms, can respond to their environment. Humans have two complimentary control systems to do this: the nervous system and the endocrine (hormonal) system. The human nervous system controls everything from breathing and producing digestive enzymes, to memory and intelligence. Nerve Cells [back to top] 7 Ways Noise Affects Your Health We are surrounded by sound. From coworker chit-chat to the sounds of traffic outside to that tinny trace of music coming from a co-commuter’s earbuds, we often don’t consider the noise that makes up our daily environments. But the truth is that the distant jackhammers, incessant elevator bells and even the whistling and humming of the people around us can have a real effect on our health and wellness.

The 10 Tech Terms to Know in 2013 Cognitive Radio The airways are getting crowded, thanks to smartphone and tablet data transmission that doubles every year. One solution: cognitive radio devices, whose signals automatically jump back and forth between frequencies in a fraction of a second to find open spectrum. A prototype developed at Rutgers University can switch to a new frequency in less than 50 microseconds while sending eight times the data of a typical home wireless system, taking advantage of openings on the AM and FM radio, TV, and cellular frequency bands. And Florida-based xG Technology has already set up a demo network in Fort Lauderdale, Fla., that uses cognitive radio for mobile broadband and VoIP links. Crucially, the FCC announced in September a pending rule change that will pave the way for spectrum-sharing technologies such as cognitive radio to use previously restricted frequencies.

FREE Interactive Learning OpenCourseware from MIT, UC Berkeley, Harvard, Yale, Stanford, U Houston, USC, UCLA, Khan Academy, NPTEL General description: Language may refer either to the specifically human capacity for acquiring and using complex systems of communication, or to a specific instance of such a system of complex communication. The scientific study of language in any of its senses is called linguistics. The approximately 3,000–6,000 languages that are spoken by humans today are the most salient examples, but natural languages can also be based on visual rather than auditory stimuli, for example in sign languages and written language. Codes and other kinds of artificially constructed communication systems such as those used for computer programming can also be called languages.

Brain-to-brain interface allows transmission of tactile and motor information between rats Researchers have electronically linked the brains of pairs of rats for the first time, enabling them to communicate directly to solve simple behavioral puzzles. A further test of this work successfully linked the brains of two animals thousands of miles apart—one in Durham, N.C., and one in Natal, Brazil. The results of these projects suggest the future potential for linking multiple brains to form what the research team is calling an "organic computer," which could allow sharing of motor and sensory information among groups of animals. The study was published Feb. 28, 2013, in the journal Scientific Reports. "Our previous studies with brain-machine interfaces had convinced us that the rat brain was much more plastic than we had previously thought," said Miguel Nicolelis, M.D., PhD, lead author of the publication and professor of neurobiology at Duke University School of Medicine. One of the two rodents was designated as the "encoder" animal.

Hard Things You Need To Do To Be Successful You have to make the call you’re afraid to make. You have to get up earlier than you want to get up. You have to give more than you get in return right away. You have to care more about others than they care about you. You have to fight when you are already injured, bloody, and sore. You have to feel unsure and insecure when playing it safe seems smarter.