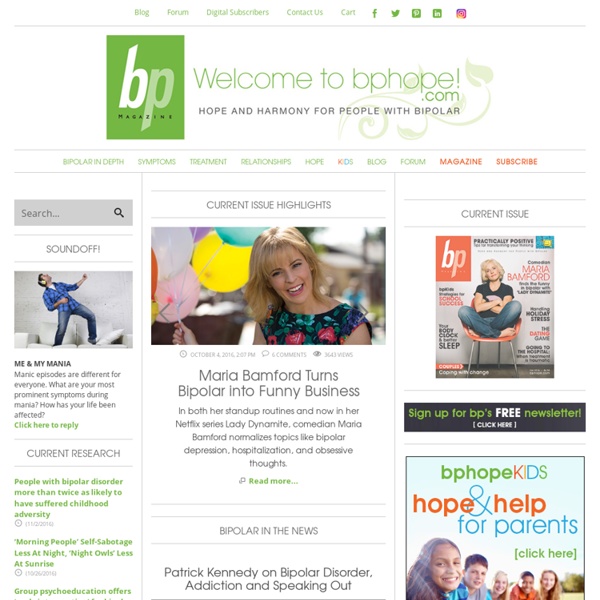 Sweet Life Depression - Home How to Recognize a Manic Episode or Hypomanic Episode of Bipolar Disorder If someone you know has or may have bipolar disorder, you need to know the signs that point to a manic or hypomanic episode. If you see a group of these behaviors, you (if possible and appropriate) or the individual in question should contact a doctor. Going to an emergency room may be the right choice, depending on how extreme the behavior is. Keep a notebook just for recording manic (and depressive) symptoms. Note: Most symptoms are shared between mania and hypomania. Make note of any changes in sleeping patterns, especially if your friend or loved one has lots of energy on just a few hours of sleep. Tips: Make a pact with your friend that if you bring these manic behaviors to his attention, he will contact his doctor. This is not an exhaustive list of manic symptoms.

Mania Manic Episode Several elements must be present to diagnose a manic episode. First, there must be a distinct period during which there are marked changes in mood—abnormally elevated (on top of the world), expansive (flamboyant, filters off), or irritable—and goal-directed activity or energy level. Next, the uncharacteristic behavior or mood must last at least a week, or require hospitalization. • inflated self-esteem or grandiosity • decreased need for sleep (for example, feeling rested after just a few hours’ sleep) • more talkative or sociable than usual, or pressure to keep talking • flight of ideas or the feeling that thoughts are racing • easily distracted by unimportant or irrelevant things • Increase in activity levels, either goal-directed (such as taking on new projects or socializing more) or a restless busyness • plunging into reckless activities like buying sprees, promiscuity or high-risk business deals Hypomanic Episode Major Depressive Episode

Mental Healthy | News, guides, advice and community - formally Uncovered magazine McMan's Depression and Bipolar Web 5 Simple Strategies to Reclaim Your Sleep During Daylight Saving Time Photo: Pexels.com By April Michael I really have a love/hate relationship with Daylight Saving Time (DST). When I was younger, I always got excited about the “spring forward” since it means longer daylight hours and that summer is just around the corner. As I got older, though, and particularly after being diagnosed with bipolar disorder, DST meant my already tenuous sleep patterns would take a further beating. Somewhat counterintuitively, my manias always lined up with fall and winter, while my depressions lined up with spring and summer. So how do you maintain your mental health during the clock change, whether you’re stable or in a depressive or manic episode? As you probably well know, maintaining good sleep hygiene is a crucial part of maintaining good mental health, particularly in the case of bipolar disorder. Scientists have found a link between lack of sleep and increased risk of relapse for people with bipolar disorder. 1. 2. 3. 4. 5. Read more:

About Us | The Icarus Project The Icarus Project envisions a new culture and language that resonates with our actual experiences of 'mental illness' rather than trying to fit our lives into a conventional framework. We are a network of people living with and/or affected by experiences that are commonly diagnosed and labeled as psychiatric conditions. We believe these experiences are mad gifts needing cultivation and care, rather than diseases or disorders. By joining together as individuals and as a community, the intertwined threads of madness, creativity, and collaboration can inspire hope and transformation in an oppressive and damaged world. Participation in The Icarus Project helps us overcome alienation and tap into the true potential that lies between brilliance and madness. To read more about our mission, vision, and work, check out the full text of our mission and vision statement. To learn more about our history and the origin of our name, check out the origins and purpose statement.