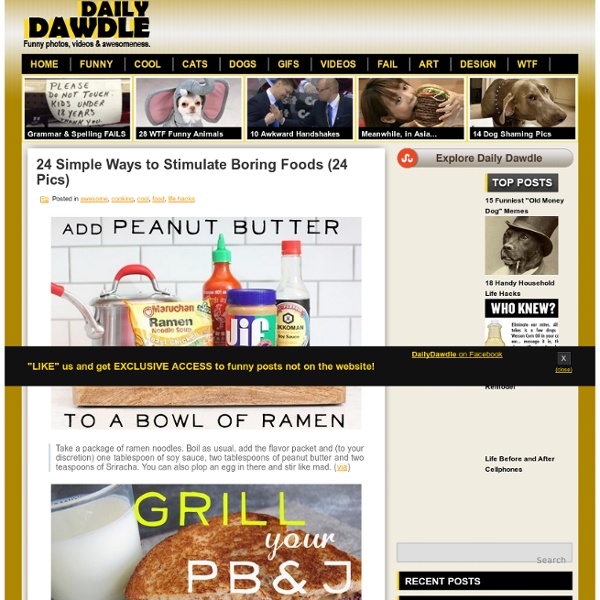 English Pronunciation If you can pronounce correctly every word in this poem, you will be speaking English better than 90% of the native English speakers in the world. After trying the verses, a Frenchman said he’d prefer six months of hard labour to reading six lines aloud. Dearest creature in creation, Study English pronunciation. I will teach you in my verse Sounds like corpse, corps, horse, and worse. pieces of heaven Intro Today I found myself pursuing the cold. I didn’t bundle up on our walk to the park after dinner. I did not turn up the heat when I got home. I removed my layers down to a t-shirt and procrastinated putting on my slippers just so that my chill could be cured from the warmth of a cup of hot cocoa topped with homemade marshmallows.

A dream treehouse · Sheepy Me I've always wanted a treehouse when I was a child but living in a city made it a little difficult. Instead, we would built forts, tents or just crawl under the bed to play. It's weird right now but back then we really loved having those hideouts where nobody could find us.

A cupcake for every day of the month. The struggle. SCORE 119 The cone of happiness SCORE 114 I'll have a German Shepherd, shaken, not stirred. Cinnamon Bread Pudding with Whiskey Sauce, Bread Pudding with Bourbon, Krispy Kreme Bread Pudding with Butter Rum Sauce - Jill, Here are a few more Bread Pudding recipes for you! (nt) I have been unable to locate my recipe, but it was like the first one listed below, but with the sauce of the krispy creme one. It really was wonderful. I omitted the raisins, and just used cubed homemade sourdough cinnamon raisin bread. BREAD PUDDING:2 1/2 cups hot skim milk3/4 cup sugar2 egg whites2 eggs1/4 cup raisins or dried currants5 cups cinnamon bread pieces (1-inch)1/4 cup nonfat vanilla yogurtWHISKEY SAUCE:1 cup sugar1 cup water1/4 cup whiskey* BREAD PUDDING:Preheat oven to 375F.

National Geographic photographer’s unbelievable encounter with vicious predator in Antarctica (VIDEO) by Dan Havlik posted Thursday, January 31, 2013 at 5:29 PM EDT We've posted quite a few amazing underwater photography videos here before but this story might be the most unbelievable yet. In the clip (embedded below), National Geographic photographer Paul Nicklen talks about his encounter with one of Antartica's most vicious predators, the Leopard Seal. On assignment in the antarctic to photograph the Leopard Seal in its native environment, Nicklen spots a behemoth Leopard seal, which his guide says is the biggest he's ever seen. "Time to get in the water, ya," Nicklen's guide tells him.

The Cook Abides. Nov 13 So, Boing Boing asked me to do a recipe for them. The only caveat is that it involve caffeine. Done and Done. The 23 Genius Ways To Use An Ice Cube Tray There is so many uses for the ice cube tray, athat you cannot just simply write it down. You never should use it just for ice, because, you are missing so much chances to make something new, and trilling. Since the summer is slowly coming, there are a lot way you can use ice tray and make the perfect snack maybe, or even a delicious desert.

Build Great Abs Fast : Take 5 : Stay Fit and Get More Done in Less Time : Men's Health Develop incredible abs with a medicine ball (one of 8-10 pounds is optimal) and this three-exercise circuit. Work up to three circuits. Double Crunch Lie on your back, with your hips and knees bent and your feet off the floor. Rest your hands lightly on your chest. Position the ball between your knees. Dynamic Optical Illusions - GROW ILLUSION. Stare at the center of the below illusion for about a minute. The longer the better. Then look away and watch you world melt! Press F11 to see the illusion full screen for a stronger effect! (press F11 again to return to normal browser view afterwards)

Make Your Chocolate Butterflies Decorate your cupcakes, cakes and much more! You want to keep your tiny artwork inside the freezer before you will need to use them, and try no to handle them any more than necessary. They crack without difficulty, particularly if they’re thin or large.