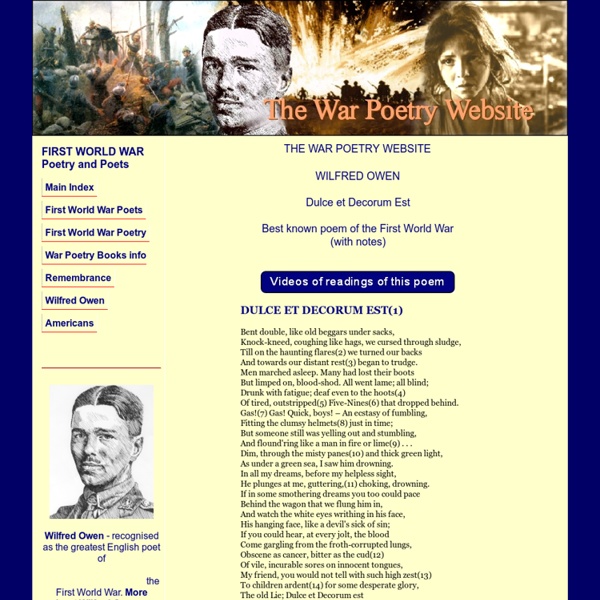 WILFRED OWEN Dulce et Decorum Est Best known poem of the First World War (with notes) Bent double, like old beggars under sacks, Knock-kneed, coughing like hags, we cursed through sludge, Till on the haunting flares(2) we turned our backs And towards our distant rest(3) began to trudge. Men marched asleep. Many had lost their boots But limped on, blood-shod. All went lame; all blind; Drunk with fatigue; deaf even to the hoots(4) Of tired, outstripped(5) Five-Nines(6) that dropped behind. Wilfred Owen Thought to have been written between 8 October 1917 and March, 1918 Notes on Dulce et Decorum Est 1. 2. 3. 4. 5. 6. 7. 8. 9. 10. 11. 12. 13. 14. ardent - keen 15. These notes are taken from the book, Out in the Dark, Poetry of the First World War, where other war poems that need special explanations are similarly annotated. Pronunciation The pronunciation of Dulce is DULKAY. Videos of readings of Dulce et Decorum Est - Click to see. To top of page Copyright Links Back to Main Index

Fresh Paint - Broken Culture | The Finer Side of Underground Culture There’s a lot of graffiti/street art projects making their way around the internet recently that we’re really feeling. As ever, that futurist, abstract graffiti style really resonates with our retinas and artists such as Zoer continue to take it to the next level. There’s also an incredible array of spots and locations on show, from Kenor and H101′s Berlin Dome to Gilbert1′s abandoned French house. Check it all out below. Shok-1: X Rainbow 9Shok-1′s intricate X-Ray style goes from strength to strength, with his recent East London fly mural showing just how far he’s come with it. Kenor & H101: ‘DOME’ Kenor and H101 got to work on a set of abandoned domes, a remaining relic from the cold war in Teufelsberg, Berlin. Zoer, Velvet & Persu: Histoire d’un MurA collaboration between three of our favourite street artists for the sixth mural in a series called ‘The History of a Wall’, Zoer, Velvet and Persu’s effort uses collage alongside paint for a really interesting effect. about the author: Max

Science images from across the globe 13 September 2013Last updated at 12:13 ET Suzi Gage & Simon Redfern Science reporters, BBC News, Newcastle A few millilitres of water were put in this balloon before it was over-inflated. The high-speed flash was trigged by the sound of the burst, capturing the image One hundred images form a stunning new photographic exhibition that demonstrates the role played by imaging across many areas of science. The show reveals many aspects of Nature not usually visible to the naked eye. The Royal Photographic Society is hosting the event alongside the Science and Technology Facilities Council. Currently on display in Newcastle as part of the British Science Festival, it will shortly tour the UK, Europe and China. The photographs included in the exhibition exploit a range of techniques, such as CT and MRI scanning, X-ray technology and refraction-measuring "Schlieren" imaging. This is the second time the International Images for Science exhibition has taken place.

Alex Ries - Science Fiction Barnards' Swordswallower © Alex Ries 2007 Living in the oceans of a dense metal rich planet, the Swordswallower moves through the sea on a single undulating ventral fin. As it moves, its jaw sweeps planktonic life into its small mouth at the back of the 'net', where it is filtered and any food swallowed. To alter its depth, a gas bladder fills much of its insides and can change volume at will, letting the Swordswallower feed using minimum energy. Under the shadow of this specimen, a school of smaller fish-size relations of the Swordswallower seek shelter under its shadow. Trailing from the rear of this specimen are two long pale strings of gametes, releasing hundreds of reproductive cells into the sea as it swims, to mix in the water with the eggs and sperm of others swimming nearby. To see the internal anatomy of this critter check out my gallery. It was painted in Photoshop using standard fuzzy brushes set to between zero and 70% hardness, with hard brushes used for fine details.

On-Line: The Wonderful Cadis Worm Hubert Duprat and Christian Besson Hubert Duprat (artist), rue du Four, 34270 Claret, France. Christian Besson (philosopher, art critic), 12, rue de Mazy, 21160 Marsanny-la-Côte,France. Translated by Simon Pleasance ABSTRACT Since the early 1980s, artist Hubert Duprat has been utilizing insects to construct some of his "sculptures." By removing caddis fly larvae from their natural habitat and providing them with precious materials, he prompts them to manufacture cases that resemble jewelers' creations. Christian Besson: Your work seems to be fueled by an insatiable curiosity about science. Hubert Duprat: The collectors who created those Wunderkammern were driven by a feeling that I myself experience about art. Ch.B.: Of all of your work, what you do with these caddis worms is the strangest. H.D.: I have a passion for geology. Ch.B.: The cases made by the caddis worm (under your guidance) are something between insect artifact, jewel and sculpture. Fig 1 Fig 2 Fig 3 Fig 4

100 Views of a Drowning World [Image: Kahn & Selesnick, courtesy Yancey Richardson]. I've mentioned the work of artists Kahn & Selesnick before; their surreal narratives are illustrated with elaborately propped photos that fall somewhere between avant-garde theater and landscape fiction, with mountain glaciers, salt mines, alien planets, utopian cityscapes, and, as seen here, the slowly flooding marshes of an unidentified hinterland. These images are from a new project, called Truppe Fledermaus & The Carnival at the End of the World, that opened at New York's Yancey Richardson gallery last week. Kahn & Selesnick’s latest project follows a fictitious cabaret troupe—Truppe Fledermaus (Bat Troupe)—who travel the countryside staging absurd and inscrutable performances in abandoned landscapes for an audience of no one. The particular scenes shown here, all on display until July 3, 2014, are from a sub-series within the project called "100 Views of a Drowning World." [Images: Kahn & Selesnick, courtesy Yancey Richardson].

Boom Bap Festival 2014 - Broken Culture | Uk Hip Hop, D&B and Underground Music I’m not sure if Boom Bap festival even needs introduction on this website any more, but talking about it gets me excited so let’s have a go anyway. Twenty-twelve saw us bask in sunshine in slight disbelief of the fact that we were at a purely UK Hip Hop festival that was pulled off so meticulously well with so many of the country’s greats in attendance, both on the stage and enjoying life off of it (review here). Twenty-thirteen featured sideways rain and empty tents flying above our heads but, more importantly, a somehow further improved lineup to enjoy never the less (review here). The festival itself seemed to sum up UK Hip Hop’s perseverance through the constant grey skies that probably make a lot of our introspective, occasionally even glum, lyrics what they are, never afraid to point out the monotone clouds above us but equally as willing to find the silver lining. about the author: Max

"Blow" White? Artist Creates NSFW Disney Characters People complain about the Disneyfication of children all the time, so one can only imagine how hard it must be for the characters themselves to live up to the unrealistic expectations of a fairytale existence. Now artist José Rodolfo Loaiza Ontiveros is helping them cast off their bejeweled shackles and stick it to the man, aka Walter “Walt” Disney. His work is currently on display at L.A.’s La Luz de Jesus gallery in an exhibition titled Profanity Pop. Happily ever after, indeed.