The Voice of Generation Y 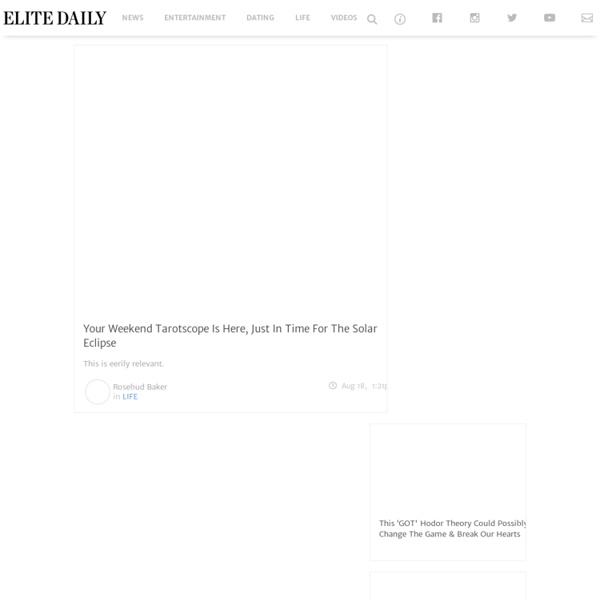 Wakerupper - The Web's Easiest Telephone Reminder Learning Liftoff - Free Parenting, Education, and Homeschooling Articles and Games Daily Grammar - Improve your writing with our free grammar lessons More than Usher: R&B Revamped True soulfulness can be morphed, re-structured and layered, but never lost. Alternative R&B is accomplishing just that. Artists such as Frank Ocean, Jhene Aiko, Miguel and the Weeknd seem to have taken the classically smooth feeling of the genre and combined it with various electronic and independent influences to reflect a fresh generation. Thanks to the impact of these artists, many independent artists have been inspired to make their own mark on this emerging sub-genre. The term R&B has undergone a notable amount of change and re-definition since its conception. While acknowledging the sensitivity of the name is highly relevant and necessary, the fact is that the artists who are said to fall within this genre are producing innovative and norm-bending work that certainly deserves to be recognized. Photo courtesy of Def Jam. Ocean’s smooth vocals, piercing lyrics and moody vibe have helped him retain a dedicated fan base that still eagerly awaits the release of his coy second album.

Goodbye, Zen Coding. Hello, Emmet! Advertisement Back in 2009, Sergey Chikuyonok wrote an article1 to present a new way of writing HTML and CSS code. This revolutionary plugin, called Zen Coding, has helped many developers through the years and has now reached a new level. Emmet2, previously known as Zen Coding, is the most productive and time-saving text-editor plugin you will ever see. For those who prefer to watch instead of read, here is a summary of my favorite tricks. How Does It Work? Let’s face it: writing HTML code takes time, with all of those tags, attributes, quotes, braces, etc. HTML Abbreviations Initializers Getting started with a new HTML document takes less than a second now. html:5 or ! Easily Add Classes, IDs, Text and Attributes Because Emmet’s syntax for describing elements is similar to CSS selectors, getting used to it is very easy. Also, you can combine classes and IDs. Now let’s see how to define content and attributes for your HTML elements. <h1>foo</h1> And square brackets are used for attributes.

Websites That Make You Smarter Quick Recipes & Easy Recipe Ideas - Tablespoon Codingeek A home for Coders From Sharing Economy To Gift Ecology, by Nipun Mehta Couple weeks back, Sam and I spoke at a local gathering in Oakland. In casual conversation, the convener of our circle, Syra tells us: "I love that so many people are talking about sharing. See, I'm always campaigning for it," handing us a card for local sharing event. Like many, Syra consolidated two ideas into one: sharing and giving. Sharing has elements of inter-connectedness, of a village-like community, of a transformative altruism. It's a pattern we've seen before. Now, it seems like sharing is having its turn. In 'Case Against Sharing', Susan Cagle writes: "For the past few years, the 'sharing economy' has characterized itself as a revolution: Renting a room on Airbnb or catching an Uber is an act of civil disobedience in the service of a righteous return to human society’s true nature of trust and village-building that will save the planet and our souls. On paper, it seems like a good idea to build an app to share my lawn mower with everyone on my block.

Leslie Nielsen Leslie William Nielsen, OC (11 February 1926 – 28 November 2010) was a Canadian-American actor and comedian.[1][2] Nielsen appeared in more than one hundred films and 150 television programs over the span of his career, portraying more than 220 characters.[3] Although Nielsen's acting career crossed a variety of genres in both television and films, his deadpan delivery in Airplane! marked a turning point in his career, one that would make him, in the words of film critic Roger Ebert, "the Olivier of spoofs Early life[edit] Nielsen's half-uncle Jean Hersholt (pictured here in the 1936 film His Brother's Wife) inspired him to become an actor. Nielsen was born on 11 February 1926 in Regina, Saskatchewan.[6] His mother, Mabel Elizabeth (née Davies), was a Welsh immigrant, and his father, Ingvard Eversen Nielsen, was a Danish-born Constable in the Royal Canadian Mounted Police.[7][8][9] His half-uncle, Jean Hersholt, was an actor best known for his portrayal of Dr. Career[edit] Early career[edit]