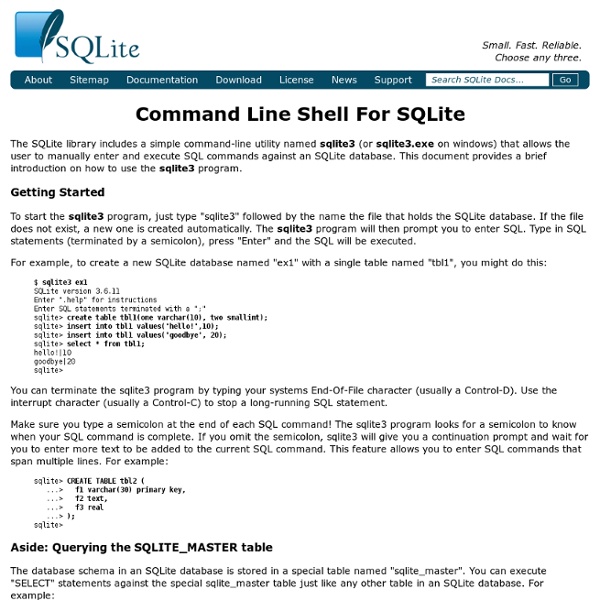 Small. Fast. Reliable.Choose any three. The SQLite project provides a simple command-line utility named sqlite3 (or sqlite3.exe on windows) that allows the user to manually enter and execute SQL statements against an SQLite database. Getting Started To start the sqlite3 program, just type "sqlite3" optionally followed by the name the file that holds the SQLite database. For example, to create a new SQLite database named "ex1" with a single table named "tbl1", you might do this: $ sqlite3 ex1 SQLite version 3.8.4 2014-02-11 16:24:34 Enter ".help" for usage hints. sqlite> create table tbl1(one varchar(10), two smallint); sqlite> insert into tbl1 values('hello!' You can terminate the sqlite3 program by typing your systems End-Of-File character (usually a Control-D). Make sure you type a semicolon at the end of each SQL command! sqlite> CREATE TABLE tbl2 ( ...> f1 varchar(30) primary key, ...> f2 text, ...> f3 real ...> ); sqlite> Double-click Startup On Windows Special commands to sqlite3 Related:  Interesting tech reads

Download Page Small. Fast. Reliable.Choose any three. Build Product Names Build products are named using one of the following templates: sqlite-product-version.zip sqlite-product-version.tar.gz sqlite-product-os-cpu-version.zip sqlite-product-date.zip Templates (1) and (2) are used for source-code products. The version is encoded so that filenames sort in order of increasing version number when viewed using "ls". The date in template (4) is of the form: YYYYMMDDHHMM Source Code Repositories The SQLite source code is maintained in three geographically-dispersed self-synchronizing Fossil repositories that are available for anonymous read-only access. See the How To Compile SQLite page for additional information on how to use the raw SQLite source code. (Dallas) (Newark) (Fremont) The documentation is maintained in separate Fossil repositories located at:

RA: A Relational Algebra Interpreter Introduction RA is a simple relational algebra interpreter written in Java. It is built on top of an SQL-based relational database system. It implements relational algebra queries by translating them into SQL queries and executing them on the underlying database system through JDBC. RA is packaged with SQLiteJDBC, so you can use RA as a standalone relational-algebra database system. Currently Supported Database Systems SQLite (SQLite JDBC v056): JDBC driver is included in the JAR. Getting RA The current version of RA is 2.1b. A .tar.gz file with everything including source code. Using RA To run RA, just type "java -jar ra.jar" in the directory containing ra.jar. If you want to connect to another database or a different database system, you need to write a connection properties file of your own. Once you are in RA, you will see the ra> prompt. ADVANCED USERS: Using \sqlexec_{statement};, you can send an SQL command to the underlying database. Known Issues/Limitations

Kernow 1.8 The SAXON XSLT and XQuery Processor Validation & DTDs Table of Content: General overview Well what is validation and what is a DTD ? DTD is the acronym for Document Type Definition. This is a description of the content for a family of XML files. Validation is the process of checking a document against a DTD (more generally against a set of construction rules). The validation process and building DTDs are the two most difficult parts of the XML life cycle. The definition The W3C XML Recommendation (Tim Bray's annotated version of Rev1): (unfortunately) all this is inherited from the SGML world, the syntax is ancient... Simple rules Writing DTDs can be done in many ways. How to reference a DTD from a document: Assuming the top element of the document is spec and the dtd is placed in the file mydtd in the subdirectory dtds of the directory from where the document were loaded: Notes: The system string is actually an URI-Reference (as defined in RFC 2396) so you can use a full URL string indicating the location of your DTD on the Web. Declaring elements:

Nobel scientist Tim Hunt: female scientists cause trouble for men in labs | UK news Scientists should work in gender-segregated labs, according to a Nobel laureate, who said the trouble with “girls” is that they cause men to fall in love with them and cry when criticised. Tim Hunt, an English biochemist who admitted that he has a reputation for being a “chauvinist”, said to the World Conference of Science Journalists in Seoul, South Korea: “Let me tell you about my trouble with girls … three things happen when they are in the lab … You fall in love with them, they fall in love with you and when you criticise them, they cry.” Hunt said he was in favour of single-sex labs, adding that he didn’t want to “stand in the way of women”. The 72-year-old, who won the 2001 Nobel prize in physiology or medicine, made the remarks when addressing a convention of senior female scientists and science journalists. His comments were tweeted by Connie St Louis, who directs the science journalism program at City University, London, and was attending the conference.

16 on-point responses from female scientists to Nobel winner's sexist comments LONDON — How do you respond to sexist comments if you're a female scientist who has been told that you should be in a single-sex lab because male scientists might fall in love with you? You mock them on Twitter, of course. Female scientists have been tweeting photos of themselves (and some historical figures) with the hashtag #distractinglysexy in response to Sir Tim Hunt's comments on Tuesday. He told a conference in South Korea that the "trouble with girls" is they fall in love with you, you fall in love with them and that then when they're criticised, they cry. British biochemist Hunt, who was awarded a Nobel Prize in Physiology or Medicine in 2001, resigned from his role at University College London following the controversy. After news of his comments spread, they sparked outrage in the science community in Britain and beyond. Here are 16 of the best #distractinglysexy tweets: Have something to add to this story?

Female Scientists Respond Brilliantly To Biochemist Calling Women Distractions [UPDATE] After asserting that female scientists should be segregated from their male peers because they distract them, fall in love with them and cry, British biochemist Tim Hunt issued a half-hearted apology Wednesday -- and women in science are letting him have it. Hunt, 72, a Nobel Prize winner and fellow with the United Kingdom's prestigious Royal Society science body, came under fire this week for advocating for single-sex labs in a speech at the World Conference of Science Journalists in South Korea, "Three things happen when [women] are in the lab: You fall in love with them, they fall in love with you and when you criticize them, they cry," said Hunt. Following a backlash, Hunt went on BBC radio Wednesday morning to say he's "really, really sorry" for offending people but that he was just telling it like it is. "I did mean the part about having trouble with girls," he said. Inequality for women in science is a chronic problem.

zablogreb: Propuh or The Great Cultural Chasm Between Us “Someone is likely to mention the baffling absence of draft in the United States: Americans keep all of their windows open, and they don’t care if they are exposed to draft, although it is well known that being exposed to sever airflow might cause brain inflammation. In my country, we are suspicious of free-flowing air.” --Aleksandar Hemon The Lazarus Project page 12. The draft, or propuh, is an indispensable part of life in Croatia and much of the Balkans. A breeze blowing from one end of the apartment to the other, or a chilly wind on a cloudy day can result in all kinds of ailments. 1. Before moving to Croatia I did not really believed in the explanatory power of culture. The presence of propuh in Southeastern Europe or its “baffling” absence in the US is as indicative of culture and its importance as one can get. My in-laws, friends, and students cannot understand how I cannot comprehend the reality of propuh. The wind is an iconic symbol of America. Where does this leave us?