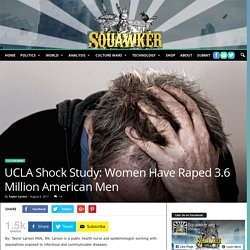 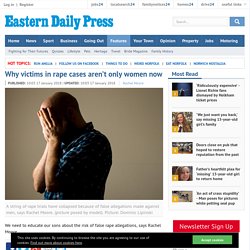 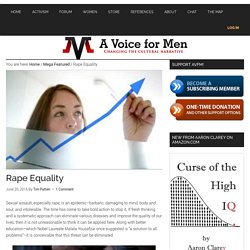 The time has come to take bold action to stop it. If fresh thinking and a systematic approach can eliminate various diseases and improve the quality of our lives, then it is not unreasonable to think it can be applied here. Along with better education–which Nobel Laureate Malala Yousafzai once suggested is “a solution to all problems”–it is conceivable that this threat can be eliminated. Before discussing what needs to be done, it is necessary to understand how a gendered lens has influenced and, unfortunately, distorted perspectives.

For most people, the word “rape” conjures up imagery of a helpless young female being held down and forcefully penetrated by a male assailant, a brutal and often bloody act, provoking empathy for the victim and disgust for the attacker. A rape epidemic — by women? Column. Writing in Time, Cathy Young notices something interesting in the Centers for Disease Control and Prevention figures on rape: Women rape a lot more than people think.. 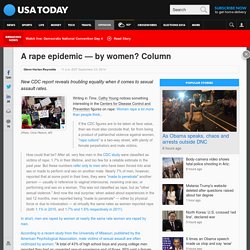 If the CDC figures are to be taken at face value, then we must also conclude that, far from being a product of patriarchal violence against women, "rape culture" is a two-way street, with plenty of female perpetrators and male victims. According to a recent study from the University of Missouri, published by the American Psychological Association, male victims of sexual assault are often victimized by women: "A total of 43% of high school boys and young college men reported they had an unwanted sexual experience and of those, 95% said a female acquaintance was the aggressor, according to a study published online in the APA journal Psychology of Men and Masculinity. 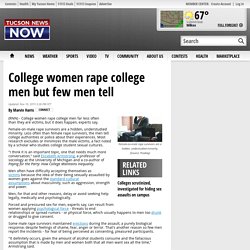 Female-on-male rape survivors are a hidden, understudied minority. Less often than female rape survivors, the men tell college authorities or police about their experiences. Most research excludes or minimizes the male victims, a fact noted by a scholar who studies college student sexual cultures. Misandry in psychology: Ignoring abused boys. New Study Suggests No Such Thing as ‘Rape Culture’ on U.S. College Campuses. One of the major talking points of millennial social justice warriors is the presence of a ‘rape culture’ on college campuses across the United States. 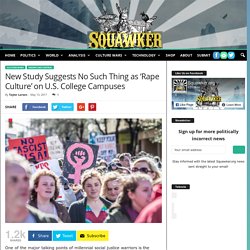 Who is often penned with the blame for these rapes? The white boogeyman, the token offender of every minority in the world. Feminists have, for years, suggested ‘rape culture’ is a phenomenon that is wide-spread and out of control, that (white) men somehow walk around campuses feasting on flesh with their eyes and looking for their next victim. Unfortunately, they don’t have actual facts to support their claims, and because of this, they have to make up their own ‘alternative facts’.

Recent AAUW Report Undermines The Campus Sexual Assault Narrative. Anyone who has followed the campus sexual assault debate over the last decade has heard advocates, politicians, and reporters throwing around the disconcerting statistic that 1-in-5 women will be the victim of sexual assault while in college. 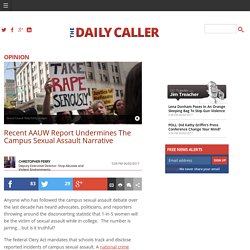 The number is jarring…but is it truthful? The federal Clery Act mandates that schools track and disclose reported incidents of campus sexual assault. A national crime victimization survey found that 65% of victims of sexual offenses do not report the assault. Currently, 12.7 million women are enrolled in American degree-granting colleges. UCSB Group Questions Validity of Campus Rape Statistics. A guest speaker for the UCSB Young Americans for Liberty (YAL) on Wednesday spoke against commonly held beliefs regarding sexual assault on college campuses. 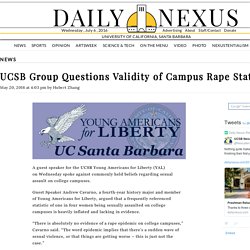 Guest Speaker Andrew Cavarno, a fourth-year history major and member of Young Americans for Liberty, argued that a frequently referenced statistic of one in four women being sexually assaulted on college campuses is heavily inflated and lacking in evidence. “There is absolutely no evidence of a rape epidemic on college campuses,” Cavarno said. “The word epidemic implies that there’s a sudden wave of sexual violence, or that things are getting worse – this is just not the case.” Washington Post Study Finds Zero Rapes on Campuses, and They Claim That’s a Bad Thing. The Washington Post on Wednesday reported that it conducted a review of federal campus safety data from over 2,220 colleges in the United States that offer bachelor’s or advanced degrees. 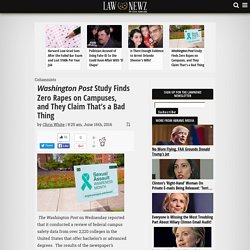 The results of the newspaper’s analysis showed that over 1,300 those colleges had zero reported rapes on campus in 2014. After having the controversial “one in five” or “one in four” college women are the victim’s of sexual assault stat drilled into our heads over the last several years, one might think the results of the The Post’s study are welcomed news. Nope, at least not to The Post — in fact, the newspaper dedicates the remainder of the article explaining why its own study must be wrong. Please support us. The frenzy over ‘campus rape culture’ is hurting real victims. 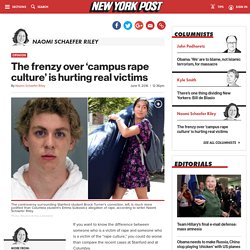 In the case of the former, two graduate students came upon a young woman, unconscious, on the ground behind a trash bin as a man was assaulting her. She awoke in the hospital to find, by her own account, “fingers had been jabbed inside me along with pine needles and debris.” In the case of the latter, a young woman (now widely known as “Mattress Girl” because she carried a mattress around campus to symbolize her plight) claimed that a man with whom she’d previously had consensual sex, assaulted her in her bed and then left.

Two days after, he invited her to come to a party, and she said yes, adding that the two should have a “chill sesh.” Cathy Young: Rape Culture in the West is as Real as 'Witchcraft in Salem' By Hunter Swogger | 12:32 pm, July 8, 2016 Late last month, Emma Sulkowicz (aka Mattress Girl) was given the Woman of Courage award by the National Organization of Women. I discussed the case and the general effect of “rape culture” hysteria recently with Cathy Young, whose article “Columbia Student: I Didn’t Rape Her” was one of the first to cast doubt on the Mattress Girl’s narrative. Here is a lightly edited transcript of that conversation: You became a fairly big public figure over the last year for the article you wrote on the Columbia sexual assault case of Emma Sulkowicz, the “Mattress Girl.”

The dangerous irony of rape accusation culture. By now, there’s no way you’ve missed the story of Brock Turner, a 20-year-old Stanford swimmer and former Olympic hopeful who in January 2015 was discovered (and chased down) by fellow students as he assaulted an unconscious, partially clothed woman behind a dumpster after a fraternity party. In March, Turner was found guilty of three counts of felony sexual assault, including attempt to rape an intoxicated woman and sexually penetrating an unconscious person with a foreign object. Prosecutors asked for a sentence of six years in state prison, but last week, Santa Clara County Superior Court Judge Aaron Persky sentenced Turner to six months in county jail and three years of probation. In explaining his decision, Persky cited character references supplied by Turner’s friends and family as well as Turner’s age and lack of criminal history.

“A prison sentence would have a severe impact on him,” Persky said. “I think he will not be a danger to others.” mdaum@latimescolumnists.com. Rape culture and the problem with the 1 in 5 sexual assault statistic - Columbia Daily Spectator. Last semester, Spectator reported on data suggesting that one in every five women on campus has experienced “sexual assault” since enrolling at Columbia. This statistic was derived from results of a survey conducted by the Association of American Universities, and was propagated alongside calls for additional support services for victims of rape. Community of the Wrongly Accused. Lawyers for 'Jackie' tacitly admit she invented her pretend rapist. UT conference debates occurrance of sexual assault on campus. Students and faculty at University of Texas at Austin are discussing the occurrence and prosecution of sexual assault on campus. The sexual assault conference held this weekend includes presentations from professors, psychologists and legal experts.

Did You Actually Read the AAU Sexual Assault Survey? Students and administrators have been rather abuzz lately with the release of the results from a sexual assault survey from the Association of American Universities’ (AAU) that covered 27 schools, including Cornell. President Elizabeth Garrett initially sent every student an email regarding the study’s findings and the numerous highly effective and meritorious actions the University is taking to reduce the prevalence of sexual assault on campus.

That week, the Cornell Sun devoted a section of its front page Tuesday and Wednesday to related coverage and President Garrett and Vice President Ryan Lombardi discussed sexual assault at the Student Assembly meeting. But how many “concerned” Cornellians have actually read the survey, or at least browsed some of the more important sections? Campus rape dogma in the age of promiscuity. Iowa: GOP: Ted Cruz 27.7% (8 delegates), Donald Trump 24.3% (7), Marco Rubio 23.1% (7); Dem.: Hillary Clinton 49.9% (22), Bernie Sanders 49.5 (21)

'Guilty until proven innocent': life after a false rape accusation. "You will almost certainly feel that the police believe that you're guilty before trial" David. Feminists And Progressives Attack College Football With More Dodgy Rape Statistics. Liberal, mainstream journalists are currently wetting themselves over a new paper from the National Bureau of Economic Research, which purports to show that sexual assaults rise on college football game days. Barbara Kay: Rape culture and the problem with numbers. Most mainstream news publications publish, you know, news. Women's group can't accept that 'rape culture' just might not be a thing. The myth of the college “rape culture” DOJ: .61 Percent Of Students Are Sexually Assaulted.

‘There is no problem’: Have feminists invented a ‘rape culture’ at universities. Hundreds Of Women In The UK Have Been Prosecuted For Lying About Rape. Ohio Cop Says 20% Of Sexual Assault Reports Are False. Visualization. The Daily Bell - The Proofiness of the Politically Correct Rape. Three Myths of Rape That Need Sunlight.