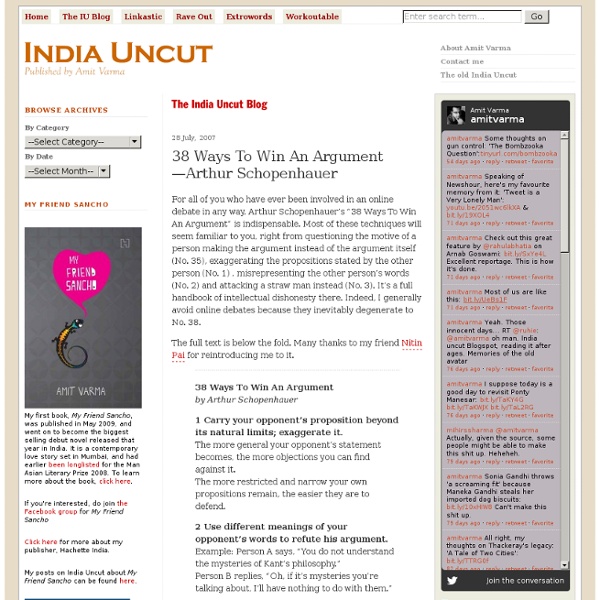 For all of you who have ever been involved in an online debate in any way, Arthur Schopenhauer’s “38 Ways To Win An Argument” is indispensable. Most of these techniques will seem familiar to you, right from questioning the motive of a person making the argument instead of the argument itself (No. 35), exaggerating the propositions stated by the other person (No. 1) , misrepresenting the other person’s words (No. 2) and attacking a straw man instead (No. 3). It’s a full handbook of intellectual dishonesty there. Indeed, I generally avoid online debates because they inevitably degenerate to No. 38. The full text is below the fold. Many thanks to my friend Nitin Pai for reintroducing me to it. 38 Ways To Win An Argumentby Arthur Schopenhauer 1 Carry your opponent’s proposition beyond its natural limits; exaggerate it. Phew.

HOW TO CHEAT AT EVERYTHING Over lunch with Simon Lovell, a fascinating former card shark, Allison Schrager learns all sorts of things about how swindlers operate ... Special to MORE INTELLIGENT LIFE "I can spot someone's weakness a mile away. Simple animation to explain complex principles - Electronics 1, aircraft radial engine 2, oval Regulation 3, sewing machines 4, Malta Cross movement - second hand movement used to control the clock 5, auto change file mechanism Four Rules to Understand What Makes People Tick - Stepcase Lifehack Breaking down human behavior into rules might seem like a gross simplification. But even with the complexities, it is easy to fall into the same mistakes. I’d argue that many heated fights, lost sales and broken hearts are caused by a few critical errors. If you make the wrong assumptions, you’ve lost before you begin. By keeping in mind these rules, you can avoid repeating the same mistakes.

Tapping our powers of persuasion Most psychologists will read this “Questionnaire” with Robert Cialdini, PhD. That may or may not be true, but according to Cialdini, that statement is powerfully persuasive because we tend to go along with our peers. Cialdini, who retired last year from a teaching and research position at Arizona State University in Tempe, Ariz., is a renowned expert in the science of swaying. In his seminal book on the topic, “Influence: The Psychology of Persuasion” (Quill, 1984), he went undercover to learn the tricks mastered by used-car dealers and Fortune 500 executives alike, bringing persuasion research to psychology’s forefront. Cialdini distilled his findings into six “weapons of influence,” each grounded in how we perceive ourselves or others: Reciprocity: We inherently want to return favors.

How To Stop Being Lazy And Get More Done - 5 Expert Tips Before we commence with the festivities, I wanted to thank everyone for helping my first book become a Wall Street Journal bestseller. To check it out, click here. Some days the to-do list seems bottomless. Just looking at it is exhausting. We all want to know how to stop being lazy and get more done. Perfect Persuasive Messages Craft messages that change minds using these 20 principles of persuasion, all based on established psychological research. Perfection is hard to achieve in any walk of life and persuasion is no different. It relies on many things going just right at the crucial moment; the perfect synchronisation of source, message and audience. But even if perfection is unlikely, we all need to know what to aim for. To bring you the current series on the psychology of persuasion I’ve been reading lots of research, much more than is covered in recent posts. As I read, I noticed the same themes cropping up over and over again.

Who's Wearing the Pants? by Sylvia Martinez | 10/26/2011 Women are taking over the world, quite literally. From the corridors of colleges, universities and law schools to the arenas of construction and mining, the number of women has increased exponentially and organically. 10 Psychology Tricks You Can Use To Influence People Before we get started, it’s important to note that none of these methods fall under what we would term the dark arts of influencing people. Anything that might be harmful to someone in any way, especially to their self esteem, is not included here. These are ways to win friends and influence people using psychology without being a jerk or making someone feel bad. Trick: Get someone to do a favor for you—also known as the Benjamin Franklin effect. Legend has it that Benjamin Franklin once wanted to win over a man who didn’t like him.

15 Secret Hiding Places That Will Fool Even the Smartest Burglar Keeping your stuff safe from potential burglars is important. Whether you have a security system installed in your home or not, there is nothing wrong with a bit of extra protection. Instead of heading out and buying the most expensive safe on the market, you can actually hide your things strategically around the house and burglars will never find them.