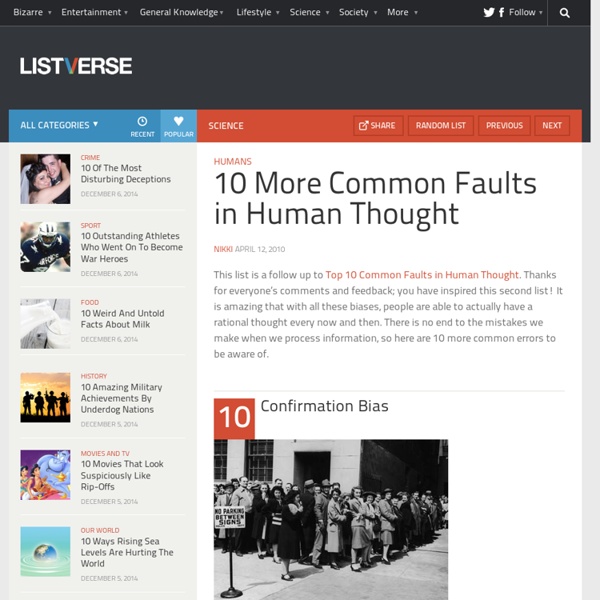 Humans This list is a follow up to Top 10 Common Faults in Human Thought. Thanks for everyone’s comments and feedback; you have inspired this second list! It is amazing that with all these biases, people are able to actually have a rational thought every now and then. There is no end to the mistakes we make when we process information, so here are 10 more common errors to be aware of. The confirmation bias is the tendency to look for or interpret information in a way that confirms beliefs. The Availability heuristic is gauging what is more likely based on vivid memories. Illusion of Control is the tendency for individuals to believe they can control or at least influence outcomes that they clearly have no influence on. Interesting Fact: when playing craps in a casino, people will throw the dice hard when they need a high number and soft when they need a low number. The Planning fallacy is the tendency to underestimate the time needed to complete tasks. Bonus Attribute Substitution

50,000 year old woman's toe reveals Neanderthals had sex with everyone According to an international team of anthropologists and geneticists at the University of California, Berkeley, our ancient Neanderthal cousins were a randy and apparently not very picky conglomerate of sexual deviants. Thanks to their remarkable research, in which DNA was extracted from a 50,000-year-old woman's toe, the team at Berkeley discovered Neanderthals had a long history of interbreeding among at least four different types of early humans living in Europe and Asia at the time. The team compared the Neanderthal genomes with those of modern humans and a recently recognised group of early humans called Denisovans, discovering that Neanderthals and Denisovans are very closely related, with their common ancestor splitting off from the ancestors of modern humans around 400,000 years ago.

100 Incredible Lectures from the World’s Top Scientists Posted on Thursday June 18, 2009 by Staff Writers By Sarah Russel Unless you’re enrolled at one of the best online colleges or are an elite member of the science and engineering inner circle, you’re probably left out of most of the exciting research explored by the world’s greatest scientists. But thanks to the Internet and the generosity of many universities and online colleges, you’ve now got access to the cutting edge theories and projects that are changing the world in this list below.

Top 10 Thinking Traps Exposed Our minds set up many traps for us. Unless we’re aware of them, these traps can seriously hinder our ability to think rationally, leading us to bad reasoning and making stupid decisions. Features of our minds that are meant to help us may, eventually, get us into trouble. Here are the first 5 of the most harmful of these traps and how to avoid each one of them. 1. The Anchoring Trap: Over-Relying on First Thoughts How to Live With an Unknowable Mind We know surprisingly little about our own personalities, attitudes and even self-esteem. How do we live with that? How do you imagine your own mind? I sometimes picture mine as a difficult and contrary child; the kind that throws a stone at you for no reason and can’t explain itself. Or while at the beach it sits silent, looking miserable.

Mind Modifications What is a Ganzfeld effect? The Ganzfeld (German for “complete/full field”) effect happens when the sensory system is steadily overloaded with a uniform signal. For example, a uniform, steady and all-encompassing soft light to the eyes will cause a “loss of vision”. This happens because, essentially, there is no change in the signal going to the brain, so the brain stops processing the signal.

Scientists Are Beginning To Figure Out Why Conservatives Are…Conservative Scientists are using eye-tracking devices to detect automatic response differences between liberals and conservatives.University of Nebraska-Lincoln You could be forgiven for not having browsed yet through the latest issue of the journal Behavioral and Brain Sciences. If you care about politics, though, you'll find a punchline therein that is pretty extraordinary. UC Berkeley Summer Reading 2006 The World Is Flat: A Brief History of the Twenty-first CenturyThomas L. FriedmanNew York: Farrar, Straus and Giroux, 2005 Although the message can be boiled down into fewer pages, a future President should understand that technology has created the opportunity for anyone in the world to perform tasks that used to be limited by geography. It sounds good for the world; is it good for the U.S.? We are the leader in offshoring. Despite information technology being one of the popular targets, IT jobs and salaries have actually increased.

To Let Go of Stress, Catch Your Breath: Ujayii Breathing How-To When I first began practicing yoga in 1983, my teachers didn’t just tell me to breathe; they gave me explicit instructions on how to breathe, how to feel the sensations of breath, and how to become familiar with the muscles of respiration. When I began studying the Ashtanga style of yoga at age 22, I was introduced to ujayii pranayama, or the triumphant breath. It was a complete revelation to me. Me, Myself and My Stranger: Understanding the Neuroscience of Selfhood Where are you right now? Maybe you are at home, the office or a coffee shop—but such responses provide only a partial answer to the question at hand. Asked another way, what is the location of your "self" as you read this sentence? Like most people, you probably have a strong sense that your conscious self is housed within your physical body, regardless of your surroundings.

21 Brilliant Productivity Tools Every College Student Must Use If you ask a college student about productivity, he won't have much to say. And you really can't blame him. He leads a dynamic life where academics and fun go hand in hand, with the latter becoming a more important activity most of the times. However, with the advent of internet and web 2.0, a college student now has access to so many amazing tools that he could finish up his work as well as enjoy life to the fullest without the guilt. 40 Ways to Let Go and Feel Less Pain “If you let go a little, you will have a little peace. If you let go a lot, you will have a lot of peace.” ~Ajahn Chah Eckhart Tolle believes we create and maintain problems because they give us a sense of identity.