Introduction to Chapter 4. On the Origins of New Forms of Life 4: Stabilization Processes: Examples Saltation, or saltatory evolution, refers to the abrupt production of new forms of life. 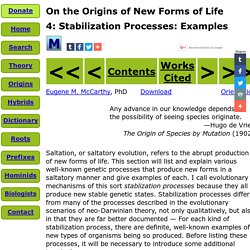 This section will list and explain various well-known genetic processes that produce new forms in a saltatory manner and give examples of each. I call evolutionary mechanisms of this sort stablization processes because they all produce new stable genetic states. Stabilization processes differ from many of the processes described in the evolutionary scenarios of neo-Darwinian theory, not only qualitatively, but also in that they are far better documented — For each kind of stabilization process, there are definite, well-known examples of new types of organisms being so produced. 4.1: Vegetative Reproduction. On the Origins of New Forms of Life 4.1: Vegetative Reproduction (Continued from the previous page) In vegetative reproduction no embryo is produced. 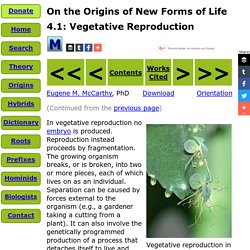 Reproduction instead proceeds by fragmentation. The growing organism breaks, or is broken, into two or more pieces, each of which lives on as an individual. In animals fragmentation can be voluntary. The various modes of apomixis should not be confused with hermaphroditism, where a single individual has both male and female sex organs, and where fertilization does in fact occur. 4.2 Alternative Life Cycles. On the Origins of New Forms of Life 4.2: Alternative Life Cycles (Continued from the previous page) Many organisms with a sexual life cycle can also reproduce vegetatively. 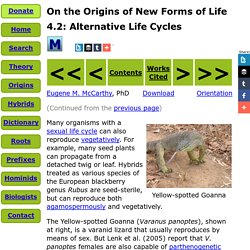 For example, many seed plants can propagate from a detached twig or leaf. Hybrids treated as various species of the European blackberry genus Rubus are seed-sterile, but can reproduce both agamospermously and vegetatively. The Yellow-spotted Goanna (Varanus panoptes), shown at right, is a varanid lizard that usually reproduces by means of sex.

For example, many members of the genus Rubus, just mentioned, not only can produce seed both sexually and agamospermously, but also can produce offspring vegetatively by rooting of stem tips. Different types of organisms reproduce by these modes at different rates. In some plant groups agamospermy replaces sexual reproduction completely (obligate agamospermy). 4.3: Stabilization Processes. On the Origins of New Forms of Life 4.3: Stabilization Processes (Continued from the previous page) A stabilization process is any series of events in which selection for a stable reproductive cycle results in the production of one or more new, stable forms of life. 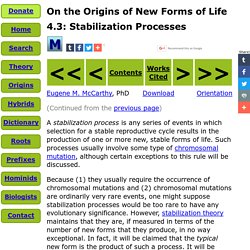 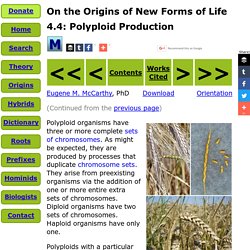 As might be expected, they are produced by processes that duplicate chromosome sets. They arise from preexisting organisms via the addition of one or more entire extra sets of chromosomes. Polyploids with a particular number of chromosome sets are designated by names that reflect their level of ploidy (triploids have three sets, tetraploids have four, pentaploids have five, and so forth). In the case of an allopolyploid, chromosome doubling stabilizes the reproductive cycle because it confers fertility. The simplest case is the situation just described of an amphiploid derived from matings between two diploid parents. 4.5: Aneuploidy. On the Origins of New Forms of Life 4.5: Aneuploidy (Continued from the previous page) Aneuploidy is produced by multiplication or deletion of individual chromosomes. 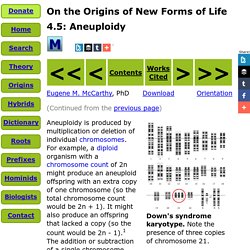 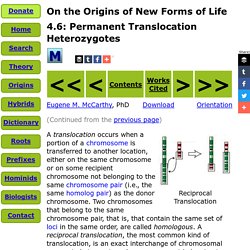 On the Origins of New Forms of Life 4.7: Production of New Agamosperms (Continued from the previous page) Recall that: Agamospermy is a mode of reproduction in which the embryo develops without fertilization; and A parthenogen is a special type of agamosperm in which such development proceeds from an unfertilized egg, and not from other types of reproductive tissues. 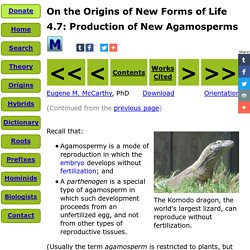 (Usually the term agamosperm is restricted to plants, but here it will be used in connection with animals, too, since parthenogens do reproduce in a way that would be called agamospermy in a plant.) Most, but not all, agamosperms are polyploid.1 However, the stabilization processes producing them differ from those producing sexual polyploids in that they do not require a recovery of pairing via chromosome doubling. 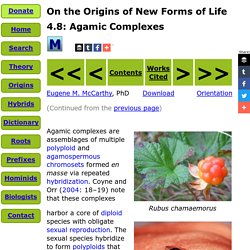 Coyne and Orr (2004: 18–19) note that these complexes Grant (1981: 442–444) gives the dandelion genus Taraxacum as an example. Other extensive complexes of this sort occur in such plant genera as Alchemilla, Crataegus, Hieracium, and Rubus.2 The Alchemilla (lady's mantle) complex, for example, contains about 1,000 forms that have been treated as species.3 As examples of animal groups in which such assemblages occur, White (1973a: 700) mentions earthworms, weevils, simuliid flies, and brine shrimp. 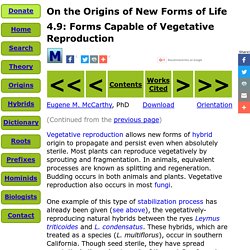 In recombinational stabilization a variable, interbreeding hybrid population produces a new, stable type of organism without the addition of chromosome sets. As we have seen, many natural hybrid populations are composed of partially fertile individuals. In general, as has already been stated (see Section 2), sexually produced progeny of F1 hybrids are usually highly variable, whether they are produced by matings among the F1 hybrids themselves or from backcrosses to the parents.

Selection among the highly variable progeny descended from a hybrid cross allows breeders to combine traits previously found only separately in the two parents from which the hybrids were derived. Recall that breeders use the word strain to distinguish hybrid derivatives that are sufficiently fertile to maintain themselves by sexual reproduction.

4.12: Conclusion. On the Origins of New Forms of Life 4.12: Conclusion (Continued from the previous page) This section has listed several different types of well-documented stabilization processes: