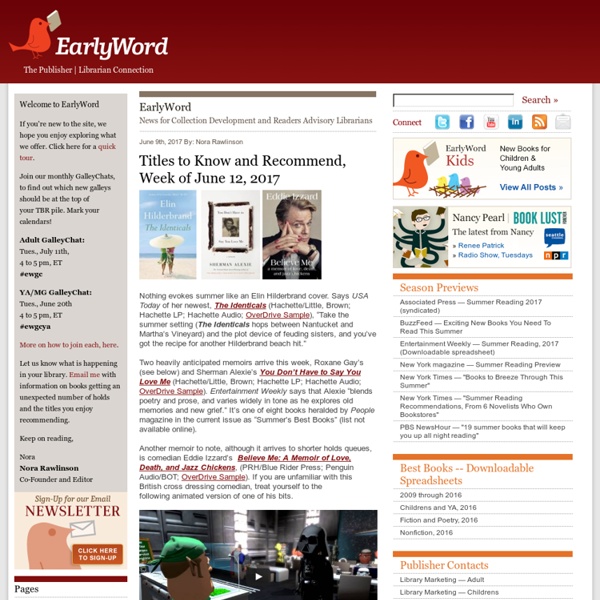 Headed for a top position on best seller lists after its release next week is David Baldacci‘s third novel featuring CIA hit man Will Robie, The Target (Hachette/Grand Central; Hachette Audio; Blackstone Audio). He appeared on CBS This Morning yesterday to describe it. Also arriving is a new thriller by Andrew Gross, Everything to Lose, (HarperCollins/Morrow; HarperLuxe; Blackstone Audio) which follows a struggling single mother faced with overwhelming temptation when she discovers a half million dollars at the scene of an accident and a posthumous book by Maeve Binchy, a collection of linked short stories about the residents of Dublin’s imaginary Chestnut Street, (RH/Knopf; RH Audio; Thorndike). Below are several other titles to be ready for next week. Ordering information for these and other titles arriving next week is available on our downloadable spreadsheet, New Title Radar, Week of 4/21. Making Headlines

EBSCOhost Latest News & Events Latest Articles Technology & Services Discovery & Services Publisher Services ppf Subscription Fulfillment The latest in books and fiction Our privacy promise The New Yorker's Strongbox is designed to let you communicate with our writers and editors with greater anonymity and security than afforded by conventional e-mail. When you visit or use our public Strongbox server at The New Yorker and our parent company, Condé Nast, will not record your I.P. address or information about your browser, computer, or operating system, nor will we embed third-party content or deliver cookies to your browser. Strongbox servers are under the physical control of The New Yorker and Condé Nast. Strongbox is designed to be accessed only through a “hidden service” on the Tor anonymity network, which is set up to conceal both your online and physical location from us and to offer full end-to-end encryption for your communications with us.

Speculations on the Future of the Book at MIT Conference At the Unbound: Speculations on the Future of the Book conference held on May 3-4 at MIT there was no handwringing by publishers or booksellers, in this case mostly rare booksellers, over print book sales or discussion of the DoJ lawsuit. Instead the symposium, organized by two postdoctoral fellows in Writing and Humanistic Studies at MIT, Amaranth Borsuk and Gretchen E. Henderson, lingered most on what forms the book might take. The answer varied from Christian Bök’s The Xenotext, an attempt to genetically engineer a bacterium to store a poem in its genome, to Nick Montfort’s computational poem, 10 PRINT CHR$(205.5+RND(1)); : GOTO 10, a one-line Commodore 64 BASIC program, to Bob Stein’s SocialBook, a post-print publishing platform that allows users to share comments and drawings on books and articles read in Web browsers.

The 25 Best Websites for Literature Lovers It’s an interesting relationship that book lovers have with the Internet: most would rather read a physical book than something on an iPad or Kindle, and even though an Amazon purchase is just two or three clicks away, dedicated readers would rather take a trip to their local indie bookstore. Yet the literary world occupies a decent-sized space on the web. Readers, writers, publishers, editors, and everybody in between are tweeting, Tumbling, blogging, and probably even Vine-ing about their favorite books. Best Young Adult Novels, Best Teen Fiction, Top 100 Teen Novels It's almost a cliche at this point to say that teen fiction isn't just for teens anymore. Just last year, the Association of American Publishers ranked Children's/Young Adult books as the single fastest-growing publishing category. Which is why we were only a little surprised to see the tremendous response that came in for this summer's Best-Ever Teen Fiction poll. A whopping 75,220 of you voted for your favorite young adult novels, blasting past the total for last year's science fiction and fantasy poll at, dare we say it, warp speed. And now, the final results are in.

Getting past the easy reach As I’ve been working on writing my book and hitting these mental milestones (40,000 words felt like a lot, then it felt like a lot to rework my outline, then it felt like I’d hit a mountaintop at 55,000 words and counting), I’ve been thinking a lot about the way we talk about and promote books to readers. Then in today’s Shelf Awareness, I saw this about the “book grapevine.” Click through and read it because it isn’t long. In short, the book gets great promotion on the ground level, then it gets promotion from a big-name person in the field or industry, that word gets to a reader who then suggests the book to, in this case, a book seller (and you can swap book seller for librarian or teacher or any other reader advocate), who then reads the book and they themselves do ground-level promotion of the title, too. It gets the word about a particular book out there and does so fast.

Books - ArtsBeat Blog - The New York Times Photo A rambling 1950 letter from Neal Cassady to Jack Kerouac that helped inspire “On the Road” will be auctioned next month by Christie’s in New York, apparently bringing to an end an 18-month legal battle over its ownership. The 16,000-word typed letter, which carries an estimate of $400,000 to $600,000, had been considered lost before it surfaced in the discarded files of Golden Goose Press, a now-defunct small San Francisco publisher, and listed for sale by a Southern California auction house in 2014. That auction was suspended after the Kerouac estate and Cassady’s children said they were the owners. Jami Cassady, a spokeswoman for the family, told The San Francisco Chronicle this week that the three parties had reached “an amicable settlement.”

Introduction The purpose of this database is to create a tailored reading list of quality children's literature or to find out if a book has won one of the indexed awards. I expect the user to be a librarian or a teacher intervening for a child-reader, however anyone may make use of it to find the best in children's literature including parents, book store personnel, and children and young adults themselves. DAWCL has over 12,000 records from 145 awards across six English-speaking countries (United States, Canada, Australia, New Zealand, England, and Ireland). Click the link Explanation of Awards above to see a list of awards, their countries, and a brief explanation. Each book is indexed to some degree so users can find it using the form search or the keyword search.

Five Ways Libraries Can Offer Readers’ Advisory on Tumblr by Molly Wetta *This article originally appeared in the August 2014 issue of RA News.* The List List #112 Our weekly round-up of the best bookish lists floating around the internet. This installment of The List List is sponsored by Random House Audio. Visit TryAudiobooks.com to get recommendations and download a free audiobook. at Flavorwire, 5 of the Best Literary Frenemy Pairings at Design Taxi, The 15 Punctuation Marks (In Order of How Much They Do) at VIDA, Twenty “Gypsy” Women You Should Be Reading 10 Web Tools To Make Books Even Better Teachers might see the Internet as the enemy of old-fashioned books, but the two entities can actually compliment each other nicely. Websites devoted to reading and literacy help children connect with other readers, delve deeper into what they are reading, and discover new books of interest. And they provide teachers with ideas for the classroom.