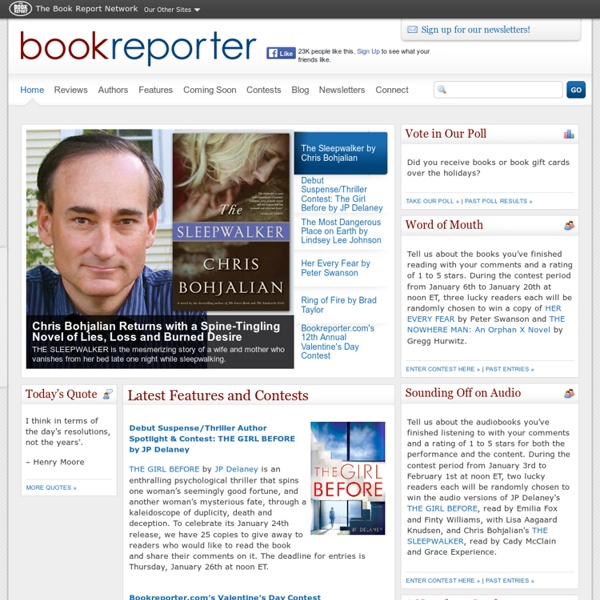 Books - ArtsBeat Blog - The New York Times Photo A rambling 1950 letter from Neal Cassady to Jack Kerouac that helped inspire “On the Road” will be auctioned next month by Christie’s in New York, apparently bringing to an end an 18-month legal battle over its ownership. The 16,000-word typed letter, which carries an estimate of $400,000 to $600,000, had been considered lost before it surfaced in the discarded files of Golden Goose Press, a now-defunct small San Francisco publisher, and listed for sale by a Southern California auction house in 2014. That auction was suspended after the Kerouac estate and Cassady’s children said they were the owners. Jami Cassady, a spokeswoman for the family, told The San Francisco Chronicle this week that the three parties had reached “an amicable settlement.” She also said the family, which owns the copyright on the letter, intended to publish it at some point.

Bookwire most readers are reading more than 2 books a The List List #112 Our weekly round-up of the best bookish lists floating around the internet. This installment of The List List is sponsored by Random House Audio. Visit TryAudiobooks.com to get recommendations and download a free audiobook. at Flavorwire, 5 of the Best Literary Frenemy Pairings at Design Taxi, The 15 Punctuation Marks (In Order of How Much They Do) at VIDA, Twenty “Gypsy” Women You Should Be Reading at Audubon, Great Books for Birders and Nature Lovers at The Boston Globe, 7 Books About Books at The Huffington Post, 7 Novels Starring Small American Towns at Word & Film, The 7 Big GAME OF THRONES Season 4 Deviations at SF Signal, 5 Short Masterpieces by the Women of Horror’s Golden Age at the LA Times, The Literary Films of Summer 2014 at Electric Literature, 10 Books That Prominently Feature Dogs at TIME, Great Books for Your Staycation at BuzzFeed Books, Library Cards From Around the US

Feedbooks | Free eBooks for Android & iPhone/iPad The PLA Blog | Official Blog of the Public Library Association As the day wound down, attendance at the Readers’ Advisory Tool Kit III was a bit down, though still very decent. Those who lasted the full day of PLA got to hear three well-known librarians suggest more ways to get books into the hands of readers. With her section “Promoting the Backlist,” Georgine Olson of Fairbanks North Star Borough Public Library and Regional Center in Fairbanks, Alaska (is the library stationary in landscape to fit the letterhead?), spoke to something that concerns me. How do you get all the great old books off the shelves and to readers? Many just sit as readers do not make it past the displays and into the stacks. Part of the answer is that we actually do have to move them – put them on the displays that are catching the readers’ eyes. Booklists are another way to draw attention to older books. Olson also told her rules for making Read-a-Like lists. Saricks regrets that she has not kept notes on every book she has ever read.