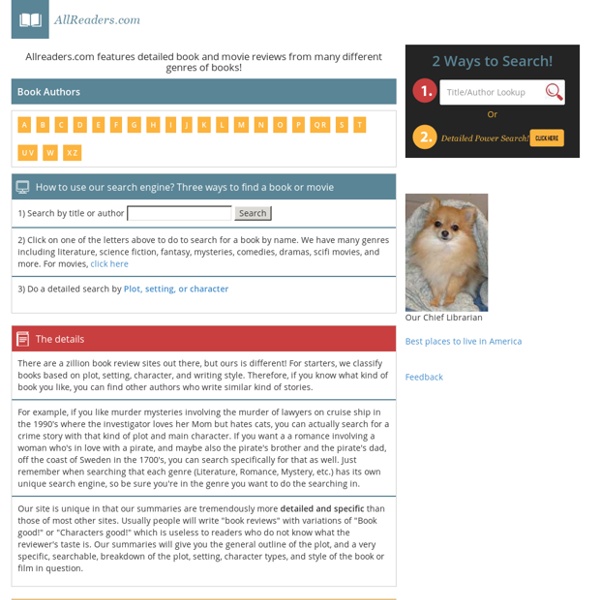 How to find the book you are looking for: 2) Do a detailed search by Plot, setting, or character 3) Or do an easy one-click plot search in the blue menu on the lower right side of this page. There are a zillion book review sites out there, but ours is different! For starters, we classify books based on plot, setting, character, and writing style. Therefore, if you know what kind of book you like, you can find other authors who write similar kind of stories.

Book reviews/choices Charles is a struggling reader. Like three out of four children with reading difficulties, Charles is a boy. He started school with limited experience with print, struggled through activities with letters and sounds, and tended to be off task when there was independent reading time. He learned in second grade to have his reading buddy do most of the reading. By third grade, when most of his classmates were fairly fluent, Charles was still guessing at words, using picture clues and avoiding books whenever he could. Bookbrowse.com - find books and read book reviews {*style:<ul>*} {*style:<li>*} {*style:<br>*}{*style:<b>*}Harry's Trees{*style:</b>*}{*style:<br>*} by Jon Cohen{*style:<br>*}What a dazzlingly yet wonderful cast of characters we meet in Harry’s Trees by Jon Cohen. The one thing united them is grief and loss. A widow loses her husband to a ...

Five Libraries Collaborate On Reader’s Advisory Project Five libraries (four in Queensland and one in New Zealand) collaborated to create Beyond The Lavender Keeper Reading Map in recognition of of Australia’s 2013 Get Reading Campaign. Click on the image to read the booklet The challenge was to produce a reading map of The Lavender Keeper to coincide with a visit to four Queensland public libraries by author Fiona McIntosh in mid-September as part of Australia’s 2013 Get Reading Campaign. The project began six weeks ago when Alison Miles from CityLibraries Townsville asked if I was interested in doing another reading map (see our previous collaborative reading map Beyond Chocolat) along with three other librarians – Jo Beazley from Toowoomba Regional Libraries, Louise Pieper from Gold Coast Libraries, and Tina Cavanough from Moreton Bay Region Libraries – who were all hosting Fiona McIntosh at their libraries within the same week. The reading map design further dictated the number of titles selected and the amount of content per title.

Blog of a Bookslut In Our MagazinesMarch 2014 Poems by Edith Södergran"My Life of the Mind, or How I Learned to Embrace Intellectual Insecurity and Distrust Neuroscience" by Dana BeckerUnder the Surface by Mojca KumerdejArt Portfolio by Michael Reedy April 15, 2014 Image: Leonora Carrington, Le chant des oiseaux In the April issue of Bookslut, Nicholas Vajifdar reviews Jane Bowles’s novel Two Serious Ladies, which was reissued by HarperCollins earlier this year.

Readers’ Advisory Resources: Beyond Lists A colleague and I were asked to present at the RT Book Convention in a session intended for librarians and booksellers. This post is adapted from a portion of our presentation. I love talking books with people. It’s my favorite part of my job. But there’s not always an opportunity for a traditional reader’s advisory interview and some readers prefer to find their own books or use passive reader’s advisory materials when searching out their next great read.

The Rumpus Book Reviews Barbara Berman reviews Heather Christle's Heliopause today in Rumpus Poetry. ...more Yumi Sakugawa discusses her latest book, Ikebana, discovering meditation, exploring blank spaces, and drawing a world of sentient oranges and one-eyed monsters. ...more Connor Goodwin reviews The Mountain and the Wall by Alisa Ganieva today in Rumpus Books. ...more I wanted what Ari wanted: affirmation that I could be a good mother while making mistakes and having ugly, difficult thoughts....more Readers' advisory Readers' advisory is defined as “Services provided by an experienced public services librarian specializing in the reading needs of public library patrons” (Reitz 2006). A successful readers' advisory service is one where knowledgeable, non-judgmental staff help readers with their leisure-reading needs. Because the library can often be confusing in their organization and layout, readers' advisers are crucial in providing the library’s leisure-reading material to the reader. Readers’ advisers should endeavor to be “knowledgeable about both fiction and nonfiction—particularly what is popular in their libraries” (Dilevko and Magowan 2007:23).

Reader's Corner - Who Writes Like Have you read every novel by your favourite author? Are you looking for more suggestions? Browse the alphabetical list Do a keyword search Enter author surname Book Recommendations Looking for a good book? Here are some resources to help you find the perfect read. In the library Stop by our Reader’s Advisory shelves near the Reference desk to look at a variety of books bursting with recommendations in every imaginable genre.

LibraryReads: The September list - Blog Post Because we love libraries, we're very excited about the new LibraryReads program. In case you haven't heard about it, here's how it works: Library staffers across the country nominate the books coming out each month that they've really enjoyed reading and are most eager to recommend to library patrons. The 10 that receive the most nominations are compiled onto a list of books that have the endorsement of not just one but many librarians—so you know they're going to be good.

Why Good Readers’ Advisory Matters Written by: Kelly on September 6, 2012. A teen boy came to the reference desk while I was working a couple of weeks ago. He asked me to tell him a good book to read. I knew nothing about the boy, other than he looked maybe 14 or 15. My first step in answering his question was to ask him more questions: what was the last thing he read that he liked and what kind of books does he usually like? The first question stumped him, but the second question he answered with: I like scary stories and things that are kind of fantasy.