The latest in books and fiction 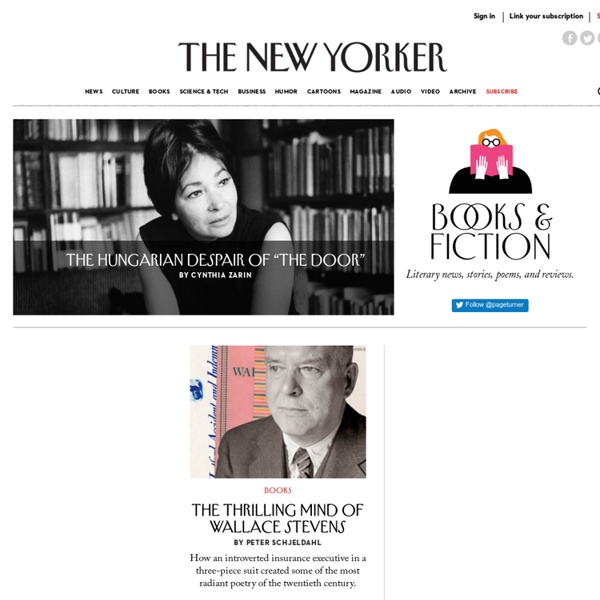 Our privacy promise The New Yorker's Strongbox is designed to let you communicate with our writers and editors with greater anonymity and security than afforded by conventional e-mail. When you visit or use our public Strongbox server at The New Yorker and our parent company, Condé Nast, will not record your I.P. address or information about your browser, computer, or operating system, nor will we embed third-party content or deliver cookies to your browser. Strongbox servers are under the physical control of The New Yorker and Condé Nast. Strongbox is designed to be accessed only through a “hidden service” on the Tor anonymity network, which is set up to conceal both your online and physical location from us and to offer full end-to-end encryption for your communications with us. This provides a higher level of security and anonymity in your communication with us than afforded by standard e-mail or unencrypted Web forms.

Culture - Is Stephen King a great writer? Stephen King has had an uncanny ability to hit the commercial bull’s-eye from the beginning of his career. In the 40 years since his first novel, Carrie, he has published more than 50 books, all of them international best sellers. Shortly after its release, Carrie was turned into a blood-drenched film by Brian De Palma. And in 1977 King’s novel The Shining, set in a wintry ski resort and featuring a paranormal child and a maniacal father, further showcased his unparalleled gift for psychological terror. When Stanley Kubrick turned that novel into a film in 1980, the Stephen King industry was born. There are now more than 100 films and TV programmes based on his work, and he shows no signs of slowing down – not with his legions of fans, hungry for more.

How books can sap the soul and poison readers with i... Reading novels is good for you. This is the current wisdom, at least. A 2013 study by the New School for Social Research in New York City attempted to prove that reading passages by Don DeLillo and Lydia Davis had an immediate impact on participants’ ability to identify the emotions of others. Another, at Emory University in Georgia, found that reading novels had the potential to cause heightened ‘connectivity’ in the brain. A third, at the University of Sussex, made the case for books being one of life’s most effective stress-relievers.

Why Are Literary Critics Dismayed by Donna Tartt’s The Goldfinch and Its Success? No one denies that Donna Tartt has written the “It novel” of the year, a runaway best-seller that won her the Pulitzer Prize. But some of the self-appointed high priests of literary criticism—at The New Yorker, The New York Review of Books, and The Paris Review—are deeply dismayed by The Goldfinch and its success. “Have you read The Goldfinch yet?” sendy.okfn Email not displaying properly? View web version Vol.5 #1

Henry James and the Great Y.A. Debate A few weeks ago, I finished reading the Library of America’s six-volume, sixty-eight-hundred-page edition of the novels of Henry James. I’m a sucker for completist projects, but this one came about more or less by accident. It took me a couple of years, and I didn’t undertake it in an especially devoted or systematic way. I had always considered James one of my favorite writers, largely on the basis of a few long novels (“The Portrait of a Lady,” “The Ambassadors”) and short stories (“The Aspern Papers,” “The Figure in the Carpet”). Focus on The Moth literary magazine Focus on The Moth literary magazine The Mo th is a highly regarded, quarterly and visually striking literary magazine, founded in 2010 and based in Cavan.

Page-Turner April 8, 2014 Slide Show: Kurt Vonnegut’s Whimsical Drawings Kurt Vonnegut, Jr.,’s crude, ludic doodles—a beaver, a cobra, an asterisk-anus—are famous from novels like “Breakfast of Champions,” as is the curly-haired self-portrait that doubled as his signature. But making graphic art was, for Vonnegut, a hobby that extended beyond illustrations for his fiction: he painted seascapes and landscapes on Cape Cod in the nineteen-fifties; felt-tip drawings of abstract faces on discarded pages of manuscripts; and larger, more formal color drawings that he exhibited in a one-man show in Greenwich Village in 1980. Vonnegut described his artwork as a pursuit that liberated him from the oppressive work of writing. In “Fates Worse Than Death,” he wrote, “My own means of making a living is essentially clerical, and hence tedious and constipating.… The making of pictures is to writing what laughing gas is to the Asian influenza.”...Continue Reading >>

Paris Review Daily - Blog, Writers, Poets, Artists - Paris Review Donald Barthelme would’ve been, and should be, eighty-three today. It would be an exaggeration to say that I feel the absence of someone whom I never met—someone who died when I was three—but I do wonder, with something more than mere curiosity, what Barthelme would have made of the past twenty-odd years. These are decades I feel we’ve processed less acutely because he wasn’t there to fictionalize them: their surreal political flareups, their new technologies, their various zeitgeists and intellectual fads and dumb advertisements. Part of what I love about Barthelme’s stories is the way they traffic in cultural commentary without losing their intimacy, their humanity. But I’m losing the thread. My point is not to reveal a secret wish that Barthelme was my uncle.

The 25 Best Websites for Literature Lovers It’s an interesting relationship that book lovers have with the Internet: most would rather read a physical book than something on an iPad or Kindle, and even though an Amazon purchase is just two or three clicks away, dedicated readers would rather take a trip to their local indie bookstore. Yet the literary world occupies a decent-sized space on the web. Readers, writers, publishers, editors, and everybody in between are tweeting, Tumbling, blogging, and probably even Vine-ing about their favorite books. In case the demise of Google Reader threw your literary Internet browsing into a dark void, here’s a list of 25 book sites to bookmark. Directory of Online Literary Journals A resource for readers and writers alike, the Review 31 Directory is a listing of English-language online literary journals. This listing also includes some print journals that offer significant online content. www.3ammagazine.com Founded: 2000, Paris Reviews, essays, interviews, fiction. Edited by Andrew Gallix Adirondack Review