Stop, You're Killing Me! 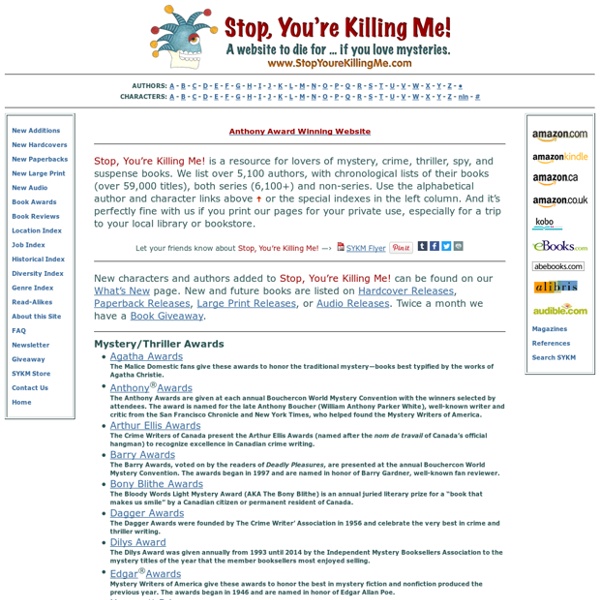 Goodreads The Hugo Awards What's Next™ Database Our What's Next®: Books in Series database helps you search series fiction. A series is two or more books linked by character(s), settings, or other common traits. e.g. Sue Grafton's "A is for Alibi", "B is for..." etc. or the "Star Wars" series Search for a Book The What's Next®: Books in Series database was developed and is maintained by the Kent District Library. We're looking for stories and feedback related to your experience with our What's Next® database. Kent District Library welcomes other libraries to link to this database. New General Catalog of Old Books & Authors The aim of this site is to catalog all deceased authors, all authors of books published before 1964, and at least some more recent authors, including their full name(s), date of death, date of birth, pseudonyms, sex & nationality (for those who died from 1920 onwards), and their books published before 1964. The purpose of this site is: by cataloging the dates of death of authors, to enable the determination of the expiry of their copyright where a “life + x years” rule applies. This is a mammoth project, and is only partially complete. Of these old authors, about 28 500 (18%) are female. For some authors, I have attempted to indicate which of their full set of names were used as a byline by the use of parentheses, but different forms occur in different places, my sources don't always make clear what was used, and it's too time-consuming to check everyone. If you have any additions, corrections or other suggestions, please send them to webmaster@kingkong.demon.co.uk. General abbreviations:

Good Reading Magazine Mystery Book Awards. Home - ♦ - About - ♦ - Search - ♦ - Omnimystery Home There are many organizations that annually recognize outstanding writing in the field of mystery, suspense, thriller and crime fiction. Select the award from the list below for more information on the authors and titles that have won. (The date next to the award is the first year in which the prize was given out; an alphabetical list is in the left sidebar menu.) The Edgar Awards (1946) The Edgar Allan Poe Awards® (the "Edgars®) are awarded annually by the Mystery Writers of America to authors of distinguished work in various categories of the genre. Le Grand Prix de Littérature Policière (1948) The Grand Prix de Littérature Policière is awarded annually to the best crime novel published in French and best international crime novel translated into French. The CWA Dagger Awards (1955) The Crime Writer Association (CWA) Dagger Awards are given annually to celebrate the very best in crime and thriller writing. The Riverton Prize (1972)