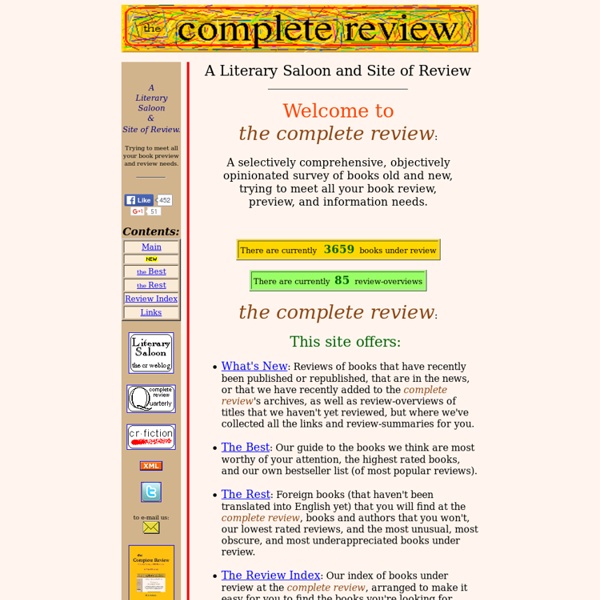 overbooked.com: a resource for readers The Invisible Library GoldWave - Audio Editing, Recording, Conversion, Restoration, & Analysis Software The PLA Blog | Official Blog of the Public Library Association As the day wound down, attendance at the Readers’ Advisory Tool Kit III was a bit down, though still very decent. Those who lasted the full day of PLA got to hear three well-known librarians suggest more ways to get books into the hands of readers. With her section “Promoting the Backlist,” Georgine Olson of Fairbanks North Star Borough Public Library and Regional Center in Fairbanks, Alaska (is the library stationary in landscape to fit the letterhead?), spoke to something that concerns me. How do you get all the great old books off the shelves and to readers? Many just sit as readers do not make it past the displays and into the stacks. Part of the answer is that we actually do have to move them – put them on the displays that are catching the readers’ eyes. Booklists are another way to draw attention to older books. Olson also told her rules for making Read-a-Like lists. Saricks regrets that she has not kept notes on every book she has ever read.

Issue 94 | March 2010 Gmaps Pedometer ANZ LitLovers LitBlog | For lovers of Australian and New Zealand literary fiction; Ambassador for Australian literature love german books Anatomy of Aggregate Collections: The Example of Google Print for Libraries Introduction Google's December 2004 announcement [1] of its intention to collaborate with five major research libraries – Harvard University, the University of Michigan, Stanford University, the University of Oxford, and the New York Public Library – to digitize and surface their print book collections in the Google searching universe has, predictably, stirred conflicting opinion, with some viewing the project as a welcome opportunity to enhance the visibility of library collections in new environments, and others wary of Google's prospective role as gateway to these collections [2]. The project has been vigorously debated on discussion lists and blogs, with the participating libraries commonly referred to as "the Google 5". One point most observers seem to concede is that the questions raised by this initiative are both timely and significant. The Google Print Library Project (GPLP) [3] has galvanized a long overdue, multi-faceted discussion about library print book collections.

a Fantasy Reader: Round of covers With many covers appearing around the web, it's time for another round of covers! First up is the UK cover art for Brandon Sanderson upcoming novel, Steelheart. The art style is the same as the previous UK release for the author. Back in 2009 and 2010, Tor released new cover art for all the Wheel of Time books, electronic editions. Next up is a new Epic Fantasy novel by English author Anthony Ryan, Blood Song. The book will be out in July and here's the blurb: Vaelin Al Sorna’s life changes forever the day his father abandons him at the gates of the Sixth Order, a secretive military arm of the Faith. Now his new skills will be put to the test. For Francis Knight third book in the Rojan Dizon series, Last to Rise, instead of showing an interior view of the vertical city, it's now shown from the outside. The cover art for Adrian Tchaikovsky penultimate Shadows of the Apt book, War Master's Gate was also unveiled: