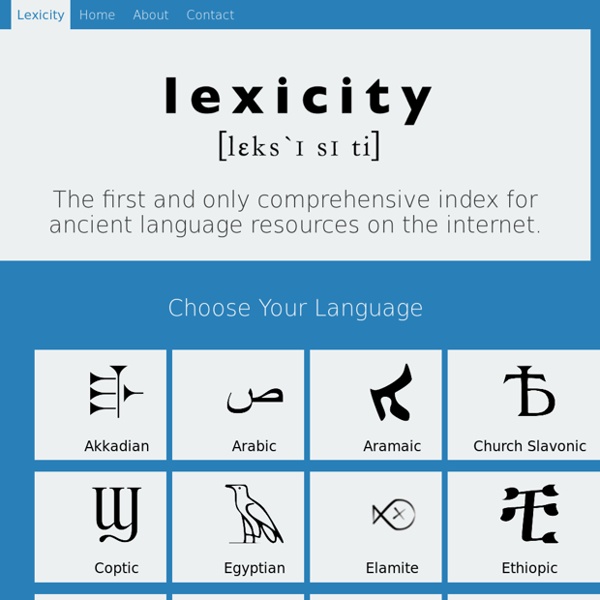 Our Guide to French Internet & Text Slang What do kids say these days? The digital culture keeps French learners just as confused as our grandparents when it comes to the newest expressions à la mode. The good thing is that once you master a few texting codes, you’ll be able to communicate in written French on a daily basis. Sometimes, texting can be so much easier than talking face-to-face! Table of Contents Table of Contents: Witchcraft and Magic in the Nordic Middle Ages 2010 | 384 pages | Cloth $49.95 | Paper $24.95 Religion | Anthropology View main book page Table of Contents PrefaceIntroductionChapter 1. Witchcraft and the PastChapter 2. Magic and Witchcraft in Daily LifeChapter 3. writing sijo Further reading: Sijo Primer (an introduction for those new to sijo) by Larry Gross (.pdf) Structure of the Korean Sijo by David McCann (.pdf) Sijo lectures by David McCann Part 1 (form and structure) Part 2 (history) Part 3 (sample analysis of sijo) The sijo (Korean 시조, pronounced SHEE-jo) is a traditional three-line Korean poetic form typically exploring cosmological, metaphysical, or pastoral themes. Organized both technically and thematically by line and syllable count, sijo are expected to be phrasal and lyrical, as they are first and foremost meant to be songs.

LEMEGETON, Part 1;2: Goetia The 9th spirit in order is Paimon; a great king, & very Obedient to Lucifer, he appeareth in ye forme of a man, sitting one a dromedary, wh a Crowne most glorious on his head. Three [There] goeth before him a host of spirits like men with Trumpets and well sounding Cymballs, and all other sorts of musicall Instruments &c. he hath a great voice, and roareth at his first comming, and his speech [voice] is such as ye Magician cannot well understand, unless he compelleth him. [102r]

IPA Typewriter If the title above does not display correctly, you should click on "About" to find out how to get a unicode font. Introduction You can use this tool to type phonemic symbols to be inserted in a word processor. You can also use it to produce the code needed to insert phonemic symbols in a web page.

Learn to read Russian in 15 minutes (Yes, for real. I thought it was a joke at first, too.) Here’s a really interesting and surprisingly simple breakdown of the Russian alphabet from writer Peter Starr Northrop and cartoonist Ryan Estrada. Give it a few minutes of your time and you’ll be confidently sounding out Russian words by the end. Next up: Learning what those words mean. See more from Northrop and Estrada.

List of occultists - Wikipedia Notable people, whether contemporary, historical or legendary, who are or were involved in any of the following practices and traditions: Classical mythology[edit] Cassandra, oracle[1]Circe, legendary sorceress[2]Hecate, goddess of witchcraft[3]Medea, often identified with Angitia, she had fled to Italy in her dragon chariot[4]Melampus, soothsayer and magician[5]Semiramis, semi-legendary queen and sorceress.[6]Vegoia, legendary inventor of Etruscan divination[7] Africa[edit] Eddie Nawgu, Nigerian sorcerer & self proclaimed prophet of God.[8][9]

The Greek Alphabet Phonology and Orthography Oops! Twenty-four letters only? Surely some sounds must be missing? Sanskrit Lexicon Page Kadaitswami: "Marketplace swami." A satguru of the Nandinatha Sampradaya's Kailasa Parampara. Born ca 1820; died 1875. Renouncing his career as a judge in Bangalore, South India, Kadaitswami became a sannyasin and trained under the "Rishi from the Himalayas," who then sent him on mission to Sri Lanka.

Verschlimmbesserung As Confucius says (Analects 58): "If terms are incorrect, language will be incongruous; and if language be incongruous, deeds will be imperfect... Hence, a man of superior mind, certain of his terms, is fitted to speak; and being certain of what he says can proceed upon it." Awhile back i encountered the German term Verschlimmbesserung--an "improvement" that makes things worse (via BetterThanEnglish dot com). This seems very much of our times, when tamper monkeys not only have seized control of the means of production, they also seem infected with a restlessness entirely disconnected from any awareness of the consequence of their actions. I thought about finding an easier to remember word. 100 (Free) Ways To Learn to Speak Another Language 100 Resources To Learn to Speak Another Language by TeachThought Staff Ed note: This post was first published in 2012, and is in the process of being updated. If you have any updates or corrections, please let us know in the comments. Learning another language is among the many things that have been made easier with the explosion of the digital universe.