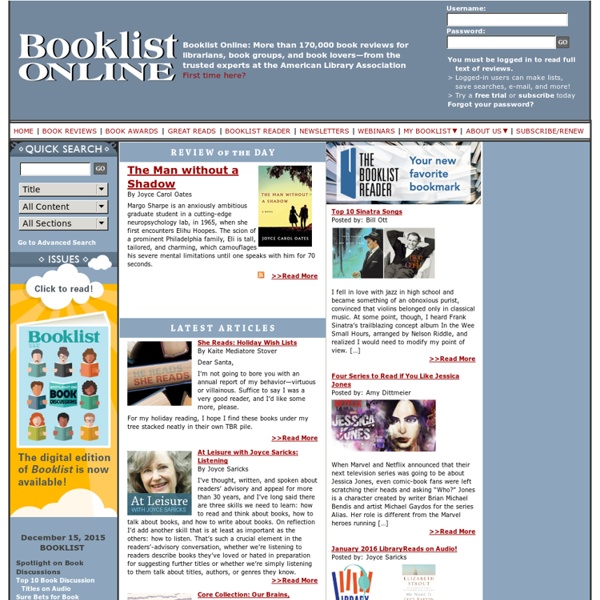 Unfortunately, your access has now expired. But there’s good news—by subscribing today, you will receive 22 issues of Booklist magazine, 4 issues of Book Links, and single-login access to Booklist Online and over 170,000 reviews. Your access to Booklist Online has expired. If you still subscribe to the print magazine, please proceed to your profile page and check your subscriber number against a current magazine mailing label. (If your print subscription has lapsed, you will need to renew.)

Reader's Corner - Who Writes Like Have you read every novel by your favourite author? Are you looking for more suggestions? Browse the alphabetical list Do a keyword search Enter author surname Interview: Ricardo Semler The almost automatic response to Ricardo Semler's wonderfully subversive new book, The Seven Day Weekend (Century, £16.99), is: 'Well, that's all very well in Sao Paulo, but we couldn't do it here.' Semler is, or was - more of this later - president of Semco, Brazil's most famous company, which has made its name by standing the conventional corporate rulebook on its head. Semco doesn't have a mission statement, its own rulebook or any written policies.

Readers' advisory Readers' advisory is defined as “Services provided by an experienced public services librarian specializing in the reading needs of public library patrons” (Reitz 2006). A successful readers' advisory service is one where knowledgeable, non-judgmental staff help readers with their leisure-reading needs. Because the library can often be confusing in their organization and layout, readers' advisers are crucial in providing the library’s leisure-reading material to the reader. Readers’ advisers should endeavor to be “knowledgeable about both fiction and nonfiction—particularly what is popular in their libraries” (Dilevko and Magowan 2007:23).

New York Times Best Seller Number Ones Listing This page is a listing of adult fiction books which have made number one on the New York Times Best Seller List along with the date that they first reached number one, in date order. Clicking on the date will take you to that week's list, if available. Currently, this listing starts at August 9, 1942. You may also view the non fiction number ones listing. As always, we want your feedback! Readers’ Advisory Resources: Beyond Lists A colleague and I were asked to present at the RT Book Convention in a session intended for librarians and booksellers. This post is adapted from a portion of our presentation. I love talking books with people. It’s my favorite part of my job. But there’s not always an opportunity for a traditional reader’s advisory interview and some readers prefer to find their own books or use passive reader’s advisory materials when searching out their next great read.

Ross Smith on Trust and Innovation (Trust Quotes #1) Given Trust Matters’ attempt to be commonsensical and practical, it’s fitting that we lead off the series with Ross Smith, a line manager who uses trust daily. I first met Ross in early 2009, when he was running a team of about 80 programmers working on Windows security for Microsoft—not the first place I would have guessed to be focused on trust. Let’s pick it up there. CHG: Ross, you didn’t set out to do work in trust, did you? RS: Hey Charlie – No, not at all.

Five Libraries Collaborate On Reader’s Advisory Project Five libraries (four in Queensland and one in New Zealand) collaborated to create Beyond The Lavender Keeper Reading Map in recognition of of Australia’s 2013 Get Reading Campaign. Click on the image to read the booklet The challenge was to produce a reading map of The Lavender Keeper to coincide with a visit to four Queensland public libraries by author Fiona McIntosh in mid-September as part of Australia’s 2013 Get Reading Campaign. The project began six weeks ago when Alison Miles from CityLibraries Townsville asked if I was interested in doing another reading map (see our previous collaborative reading map Beyond Chocolat) along with three other librarians – Jo Beazley from Toowoomba Regional Libraries, Louise Pieper from Gold Coast Libraries, and Tina Cavanough from Moreton Bay Region Libraries – who were all hosting Fiona McIntosh at their libraries within the same week. The reading map design further dictated the number of titles selected and the amount of content per title.

Microsoft’s Ross Smith asks shall we play a game? - Next at Microsoft [a rare shot of Ross and his Xbox Live Avatar sharing the stage] The first time I met Ross Smith, he was dressed in camouflage cargo shorts, a vintage rock and roll T-shirt from the ’80s and a pair of Timberland boots. Combine that with the box of Lucky Charms and various tchotchkes cluttering his office and you might question whether he’s there to work or to play. In Ross’ case, the answer would be ‘yes.’ Currently, Ross is director of test for the Microsoft Office Lync Client team. He leads a team of testers who put the Lync family of unified communications products through the paces to find defects. Book reviews/choices Charles is a struggling reader. Like three out of four children with reading difficulties, Charles is a boy. He started school with limited experience with print, struggled through activities with letters and sounds, and tended to be off task when there was independent reading time. He learned in second grade to have his reading buddy do most of the reading. By third grade, when most of his classmates were fairly fluent, Charles was still guessing at words, using picture clues and avoiding books whenever he could.

Complexity I'm in a room laden with media technology, including an umbilical cord of cables descending from the ceiling watching as grad students from the Interactive Telecommunications Program at Tisch, NYU set up to present their four future scenarios. This annual presentation, open to the public, is the culmination of Future of the Infrastructure course. These interrelated futures of new media and the global economy ironically came the same day as the New York Times summarized five “natural security” scenarios based solidly in our physical world and as potential sources of conflict. Eerily, the students’ interactive media scenarios and the military's appear inextricably connected. Wikileaks for better or worse manifests an interactive media/military DNA. I’m a big fan of Art Kleiner, adjunct professor ITP and noted author and editor-in-chief of Booz & Company’s strategy+business magazine , who set the context for the evening.

Book Recommendations Looking for a good book? Here are some resources to help you find the perfect read. In the library Stop by our Reader’s Advisory shelves near the Reference desk to look at a variety of books bursting with recommendations in every imaginable genre. Managing Business Complexity - Strategy & Administration - Article - ManagementSite Managing Business ComplexityPieter Klaas Jagersma As a result of continual pressure for growth, most companies have both expanded their product lines significantly and indulged in what appears to be ever promotional activity in an effort to stimulate customer interest and gain share. One of the consequences of all this activity has been an enormous increase in the complexity of their businesses which tends to increase the fixed costs of conducting their business. This complexity manifests itself in many forms affecting everything from the day-to-day operations of the business to senior management’s strategic plans. Economies of scale, scope and skills appear to be wiped out by ‘economies of complexity’.

LibraryReads: The September list - Blog Post Because we love libraries, we're very excited about the new LibraryReads program. In case you haven't heard about it, here's how it works: Library staffers across the country nominate the books coming out each month that they've really enjoyed reading and are most eager to recommend to library patrons. The 10 that receive the most nominations are compiled onto a list of books that have the endorsement of not just one but many librarians—so you know they're going to be good.

"The best book reviews for public libraries and school libraries, and the best books to read for your book club, brought to you by the ALA." by kl03645 Sep 11