Goethe on the Psychology of Color and Emotion 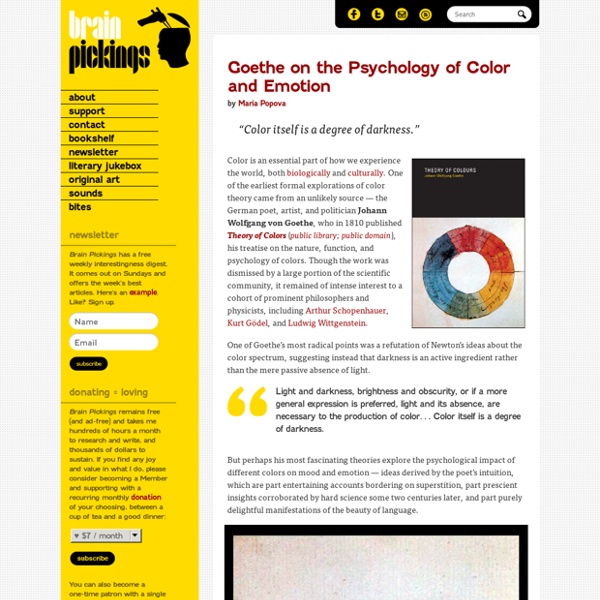 Color is an essential part of how we experience the world, both biologically and culturally. One of the earliest formal explorations of color theory came from an unlikely source — the German poet, artist, and politician Johann Wolfgang von Goethe, who in 1810 published Theory of Colors (public library; public domain), his treatise on the nature, function, and psychology of colors. Though the work was dismissed by a large portion of the scientific community, it remained of intense interest to a cohort of prominent philosophers and physicists, including Arthur Schopenhauer, Kurt Gödel, and Ludwig Wittgenstein. One of Goethe’s most radical points was a refutation of Newton’s ideas about the color spectrum, suggesting instead that darkness is an active ingredient rather than the mere passive absence of light. YELLOWThis is the color nearest the light. It appears on the slightest mitigation of light, whether by semi-transparent mediums or faint reflection from white surfaces.

The crayola-fication of the world: How we gave colors names, and it messed with our brains (part I) “Who in the rainbow can draw the line where the violet tint ends and the orange tint begins? Distinctly we see the difference of the colors, but where exactly does the one first blendingly enter into the other? So with sanity and insanity.”—Herman Melville, Billy Budd Your Mind & Body Are Not Separate For more: This isn’t news to anyone, right? We talk about feeling things in “our guts.”

9 Tips for working with Masking Fluid Using masking fluid with watercolours can add much needed contrast to your paintings. The master of the masking fluid, Rob Dudley, reveals his nine steps to success I have always enjoyed the challenge of painting in watercolour. The way that a wash runs down a sheet of stretched paper to resemble reflections in a moorland river, or the merging of two granulated colours that conveys the simple beauty of wet estuarine mud, excites me. My method of painting is to allow the colour to flow and mix on the paper and from that to add detail and structure as the painting develops. I use a great deal of water, sometimes pouring colour onto the paper from a small jar and then responding to its progress with further washes as it begins to dry.

Tytus Brzozowski - Watercolor Paintings Tytus Brzozowski is an architect and watercolorist from Poland. A great admirer of his hometown, Warsaw, the artist captures in his paintings the essence of the modern city, in it’s constant turmoil and change. Using surrealistic elements and tricks with perspective and light, the artist gives his paintings a sense of magic and mystery. Both, in architecture and painting, the artist cares about texture, mood and light. I feel the same excitement while designing space to be useful and interesting for its users as while creating scenes in my watercolors. Physicists have finally proved the existence of a new superconductive state, first proposed 50 years ago After 50 years, scientists have finally proved that superconductivity can exist inside a magnetic field. It’s a breakthrough that could help scientists better understand the behaviour of the Universe and develop new technology. Scientists from Brown University in the US have finally proved that materials can conduct an electric current without resistance - an ability known as superconductivity - even when exposed to a magnetic field. They do this by entering a superconductive state that was first proposed in 1964.

The Brink of Oblivion: Inside Nazi-Occupied Poland, 1939-1940 In the late 1930s and early 1940s, a German photographer and ardent Nazi named Hugo Jaeger enjoyed unprecedented access to the Third Reich’s upper echelon, traveling with Adolf Hitler to massive rallies and photographing him at intimate parties and in quieter, private moments. The photos made such an impression on the Führer that Hitler famously declared, upon first seeing Jaeger’s work: “The future belongs to color photography.” But beyond merely chronicling Hitler’s ceaseless travels, Jaeger also documented the brute machinery of the Reich, including the Nazi invasion of Poland in 1939. Here, LIFE.com presents a series of photos from Warsaw and from the town of Kutno, 75 miles west of the Polish capital, in 1939 and 1940.

The worst scars are in the mind: psychological torture Torture often includes methods that entail severe psychological distress and profoundly disrupt the senses and personality. This article describes how psychological methods which do not amount to ill-treatment when considered in isolation can amount to torture through their accumulation over time and their integration into the whole torture process. Dr Hernán Reyes, MD, of the ICRC’s Assistance Division, is a specialist on medical aspects of detention and has visited numerous detention centres around the world. Abstract Torture during interrogation often includes methods that do not physically assault the body or cause actual physical pain – and yet entail severe psychological pain and suffering and profoundly disrupt the senses and personality. Solitary confinement and prolonged sleep deprivation are just two examples of these psychological torture methods.

My Fountain Pens I started a new Stillman & Birn Beta journal and started my first page showing the various Fountain Pens I have on hand. Each pen illustration was sketched and description written out using the individual pen illustrated. All pens have Noodler's Lexington Gray ink which when dry is water proof allowing for watercolor washes without ink bleed. A #8 Round brush was used to paint each pen using the wet in wet technique. Love how wet in wet works on this paper! Paints used: Winsor & Newton watercolors for all pens except the Pilot Prera (Green pen) which was painted using Daniel Smith watercolors.

A Head-Up Display for Your Car That Lets You Race Yourself GhostDash creates a virtual car to follow for those who want to improve their racing skills. Justin Hayes Anyone who’s played racing videogames like Gran Turismo or even Mario Kart knows the ghost car—the hologram that rides the track with you, recreating exactly the fastest lap you’ve driven. Following that car through the apexes is the best way to learn to drive consistently fast and beat your competition come race day. Justin Hayes wanted to take that videogame feature and offer it to actual drivers. So he created GhostDash, a head-up display that projects a virtual car onto the road, right in front of the driver. Before and After D-Day: Rare Color Photos From England and France, 1944 It’s no mystery why images of unremitting violence spring to mind when one hears the deceptively simple term, “D-Day.” We’ve all seen — in photos, movies, old news reels, and usually in grim black-and-white — what happened on the beaches of Normandy (codenamed Omaha, Utah, Juno, Gold and Sword) as the Allies unleashed their historic assault against German defenses on June 6, 1944. But in color photos taken before and after the invasion, LIFE magazine’s Frank Scherschel captured countless other, lesser-known scenes from the run-up to the onslaught and the heady weeks after: American troops training in small English towns; the French countryside, implausibly lush after the spectral landscape of the beachheads; the reception GIs enjoyed en route to the capital; the jubilant liberation of Paris itself.