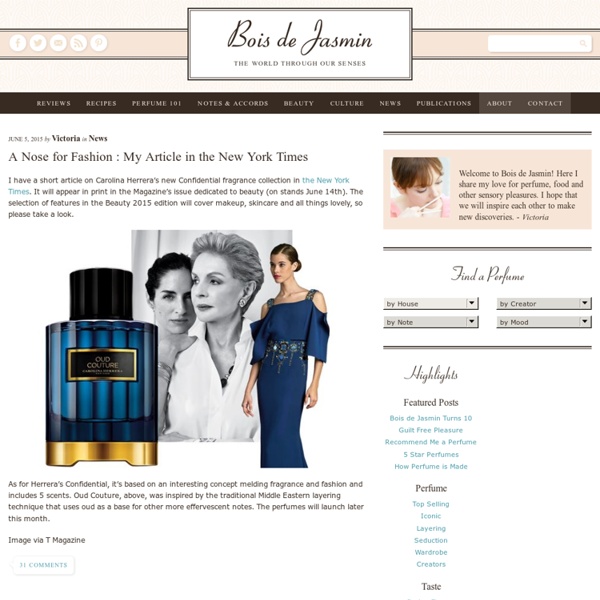 Hermes – Poivre Samarcande Aside from a couple of Frederic Malle fragrances authored by Jean-Claude Ellena, I have not written a great deal about the perfumer’s body of work for the house of Hermes. I deliberately held off writing a review for Terre d’Hermes until I am confident I have found the right way to speak about it. I am thinking it would be too enthusiastic of me to put it in the same category as Chanel No. 5, but Terre does share similar qualities; it is a masterful creation, original for its age and it has a diverse appeal usually reserved for a mass-market product. Since taking up the post of Hermes’ in-house perfumer, Ellena has proven his worth, creating fragrances with wide public appeal as well as a line of niche perfumes reserved mainly for the connoisseur.

40 maps that explain the world Maps can be a remarkably powerful tool for understanding the world and how it works, but they show only what you ask them to. So when we saw a post sweeping the Web titled "40 maps they didn't teach you in school," one of which happens to be a WorldViews original, I thought we might be able to contribute our own collection. Some of these are pretty nerdy, but I think they're no less fascinating and easily understandable. A majority are original to this blog, with others from a variety of sources. Perfumed Maze: Aroma M ~ Interview with founder/perfumer Maria McElroy At last! I have time to post the email interview with Maria McElroy, director and perfumer of Aroma M perfumes. It's taken a wee while as I've been busy painting for an exhibition about to launch next month. It's so nice to finally sit down, with a glass of wine (wearing a dab of Aroma M Geisha Noire) to indulge in some perfume exploration and musings.

What Men Should Smell Like L’Ame D’un Heros was an exciting discovery for me last year when by chance I stumbled across Guerlain’s Les Parisiennes collection at Harvey Nichols in Hong Kong. This exclusive line of classic Guerlain re-editions is unfortunately not sold here in Australia. L’Ame D’un Heros (the soul of a hero) is a re-working of the lesser-known Guerlain men’s fragrance, Coriolan, named after the legendary Roman general Coriolanus.

Some opening words “Human beings make their history themselves, but they do not do so voluntarily, not under circumstances of their own choosing, rather under immediately found, given and transmitted circumstances.” – Karl Marx It’s been a frantic flurry of message threads, late night emails, and artistic touchups since we first came together just a very, very short while ago (that might be the understatement of the century), but it’s finally here. Welcome to The Daily Opium – an experiment with the transformative potentials of the social sciences… with a little help from the Internet.

Wonder Spices spice up for delicious flavor and health! Spices are an intrinsic part of yoga cooking, and most are known to possess therapeutic and healing properties. These seven wonder spices will start you out and get you familiar with cooking yoga food with much ease…..What’s more, the exotic colors and heady aromas of spices will help you elevate any dish from the ordinary to a sublime feast for the senses of sight, smell, and taste. So spice your meals to enhance your food with better taste and medicinal and healing properties without adding a single calorie! Jeke Slumberhouse cologne - a fragrance for men 2008 Notes listed on Slumberhouse's site when I bought this one were: "Benzoin, patchouli, tobacco, lapsang souchong, vanilla, and clove." First applied, I can pick out most of the listed notes for this scent. There's a sweet tobacco, a sour and slightly smoky black tea smell, a whiff of earthy patchouli, and little hints of spice and sweetness from the vanilla, clove and benzoin.

What You Can Do to Help Do you work at a place, or have access to images and video that would fit in here, or even something you think would make national news even if it doesn't fit in here? Contact me (chris@documentingreality.com) and let me know what you have. I can assure your 100% anonymity. I keep no IP logs, so even if someone were to inquire where the stuff came from, I couldn't tell them, because there is no way I could look it up. I did the same thing with NTFU, when the police wanted names of the military people who submitted gory war pictures, I sat in jail with my mouth shut. They never uncovered the identity one single person who submitted an Iraq war picture to my site.