Organisation for Economic Co-operation and Development 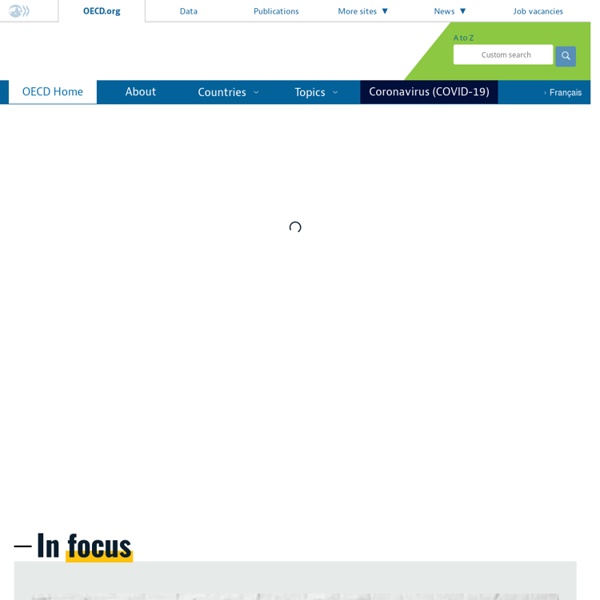 TAX: Levies on labour income rising over past three years 11 April 2014 Personal income tax has risen in 25 out of 34 OECD countries over the past three years, as countries reduce the value of tax-free allowances and tax credits and subject higher proportions of earnings to tax, according to new data in the annual Taxing Wages publication. Read more DEVELOPMENT: Aid to developing countries rebounds in 2013 to reach an all-time high 8 April 2014 Development aid rose by 6.1% in real terms in 2013 to reach the highest level ever recorded, despite continued pressure on budgets in OECD countries since the global economic crisis. Donors provided a total of USD 134.8 billion in net official development assistance (ODA), marking a rebound after two years of falling volumes.

Decisions, Recommendations and other Instruments HAVING REGARD to Article 5a) of the Convention on the Organisation for Economic Co‑operation and Development of 14 December 1960; HAVING REGARD to the Decision of the Council of 30 March 1992 concerning the control of transfrontier movements of wastes destined for recovery operations C(92)39/FINAL, as amended, which establishes an operational control system for transboundary movements of wastes destined for recovery operations; HAVING REGARD to the Basel Convention on the Control of Transboundary Movements of Hazardous Wastes and their Disposal, which entered into force on 5 May 1992, as amended on 6 November 1998 with Annexes VIII and IX listing respectively wastes characterised as hazardous pursuant to Article 1(1)(a) of the Convention and wastes not covered by Article 1(1)(a) of the Convention; NOTING that most OECD Member countries (hereafter Member countries) and the European Community have become Parties to the Basel Convention;

Treasury sees £25billion shortfall from income tax receipts amid low wage growth Britain’s deficit for 2013-2014 was £48billion larger than was forecast in 2010'Tax gap' grew to £34billion in 2012-2013HMRC is to close 14 offices by the end of the year By Camilla Canocchi for Thisismoney.co.uk Published: 16:29 GMT, 16 October 2014 | Updated: 16:29 GMT, 16 October 2014 Britain’s deficit was £48billion larger than forecast when the Coalition took power as less income tax than expected flowed into Treasury coffers because of wage stagnation, the Office for Budget Responsibility said today.

WEO 2012 Lately, the near-term outlook has noticeably deteriorated, as evidenced by worsening high-frequency indicators in the last quarter of 2011 (Figure 2: CSV|PDF). The main reason is the escalating euro area crisis, which is interacting with financial fragilities elsewhere (Figure 3: CSV|PDF). Specifically, concerns about banking sector losses and fiscal sustainability widened sovereign spreads for many euro area countries, which reached highs not seen since the launch of the Economic and Monetary Union. Bank funding all but dried up in the euro area, prompting the European Central Bank (ECB) to offer a three-year Long-Term Refinancing Operation (LTRO). Bank lending conditions moved sideways or deteriorated across a number of advanced economies.

Leadership Higher and Adult Education at OISE Time: Thursday, April 24 - 9:00 AM - 3:00 PM Location: OISE Library | 252 Bloor St W OISE's Higher Education Group joins the Ministry of Training, Colleges and Universities (MTCU)and the Higher Education Quality Council of Ontario (HEQCO) to host a free, one-day research policy symposium. This event will focus on building a community of researchers and practitioners to advance policy-based knowledge on Ontario's postsecondary education system. This event will be streamed live on April 24 starting at 9:00am. Terms & Conditions - tradorax - Binary Options These Terms of Use govern the Client’s use of the Company Internet Website and all applications, software and Services (collectively, “The Services”) available via this Website. Use of the Website By accessing this Website, the client signifies his agreement with and understanding of the following Terms of Use. The client warrants and represents to the Company that he is legally entitled to visit the Website and make use of information made available via the Website.

About the GHS Chemicals, through the different steps from their production to their handling, transport and use, are a real danger for human health and the environment. People of any ages, from children to elderly, using many different languages and alphabets, belonging to various social conditions, including illiterates, are daily confronted to dangerous products (chemicals, pesticides, etc.) To face this danger, and given the reality of the extensive global trade in chemicals and the need to develop national programs to ensure their safe use, transport and disposal, it was recognized that an internationally-harmonized approach to classification and labelling would provide the foundation for such programs. Once countries have consistent and appropriate information on the chemicals they import or produce in their own countries, the infrastructure to control chemical exposures and protect people and the environment can be established in a comprehensive manner.

Tom Hickman: Turning out the lights? The Justice and Security Act 2013 The Justice and Security Act 2013 (“JSA”) received royal assent on 25 April 2013 and Part 2 of the Act is expected to come into effect in July 2013. Part 2 makes fundamental changes to UK law in any civil case involving national security issues by creating an extraordinary and seductive alternative to public interest immunity (“PII”) procedure. The alternative, known as Closed Material Procedure or “CMP”, represents a carve-out from basic principles of equality of arms and open justice by allowing courts to consider any material the disclosure of which would be “damaging to the interests of national security” without such material being disclosed to the non-Governmental party to the case. The significance of the JSA from a rule-of-law perspective can hardly be overestimated, however infrequently it may (or may not) be used.

WEO 2013 Global growth is projected to remain subdued at slightly above 3 percent in 2013, the same as in 2012. This is less than forecast in the April 2013 World Economic Outlook (WEO), driven to a large extent by appreciably weaker domestic demand and slower growth in several key emerging market economies, as well as a more protracted recession in the euro area. Downside risks to global growth prospects still dominate: while old risks remain, new risks have emerged, including the possibility of a longer growth slowdown in emerging market economies, especially given risks of lower potential growth, slowing credit, and possibly tighter financial conditions if the anticipated unwinding of monetary policy stimulus in the United States leads to sustained capital flow reversals.

Allan's Blog Fourni par Traduction DOWNLOAD THE LATEST VERSION: V4 published Mar 2015. This PDF Poster has links to 122 of the latest and most popular educational apps. Now these resources are available in 19 different languages. The poster also has app selection criteria according to Blooms taxonomy. Forex Trading: A Beginner's Guide Forex is short for foreign exchange, but the actual asset class we are referring to is currencies. Foreign exchange is the act of changing one country's currency into another country's currency for a variety of reasons, usually for tourism or commerce. Due to the fact that business is global there is a need to transact with most other countries in their own particular currency. After the accord at Bretton Woods in 1971, when currencies were allowed to float freely against one another, the values of individual currencies have varied, which has given rise to the need for foreign exchange services.

The abolition of taxes By using this site, you agree to be bound by the terms and conditions of use. Copyright This website and its content are the copyright of the re-set trust. Individuals and communities are granted a general license for unaltered distribution of the copyright material to promote the re-set, as long as this is without commercial gain.