BarMeister.com: the online guide to drinking 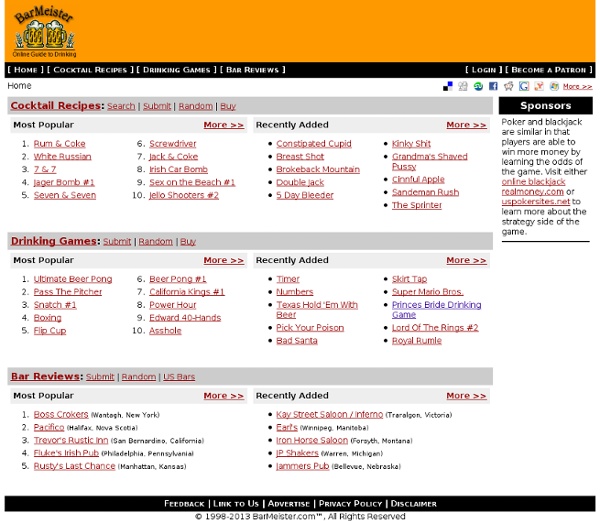 The Astounding Design Of Eixample, Barcelona Constructed in the early 20th century, Eixample is a district of the Spanish city of Barcelona known for the urban planning that divided the district into octagonal blocks. Influenced by a range of schools of architecture, Eixample Barcelona was designed in a grid pattern with long streets, wide avenues, and rounded street corners. Despite being in the center of a thriving European metropolis, the district provides improved living conditions for inhabitants including extensive sun light, improved ventilation, and more open green space for public use. And of course, the result from the grid-like structure is astounding from above: Entrepreneur Startup Advice I usually tell people that everything I learned about being an entrepreneur I learned by F’ing up at my first company. I think the sign of a good entrepreneur is the ability to spot your mistakes, correct quickly and not repeat the mistakes. I made plenty of mistakes. Below are some of the lessons I learned along the way. If there’s a link on a title below I’ve written the post, if not I plan to. The summary of each posting will be here but the full article requires you to follow the links.

How to cut glass I posted a picture about 1 week ago on Instagram, Facebook and Twitter of me cutting glass using just string. I got LOT’S of requests for a tutorial on how I DID THIS! So here it is. FINALLY! You will be able to learn how to cut glass. I want to warn you. GlitterOdyssey: Plus Size Rain Coat. Where art thou?! Hello my dearies! So today I shared a Plus Size Spring/Summer Fashion Haul on my YouTube channel: I show an awesome nautical Eshakti skirt, gorgeous London Times Fashion dresses, TEGGINGS from Re/Dress NYC, and lots from Asos.

Scissors confiscated by the TSA turned into spiders If spiders aren’t your cup of tea, this is one of those articles that could either help you overcome your fear or send you running for the hills. The metal spider pictured above was created by mechanical artist Christopher Locke who formed them out of scissors that were confiscated at airports by the TSA . I don’t know about you, but when I see a pair of barber shears, I am not thinking about creating a creepy-yet-awesome sculpture out of them. Locke on the other hand transforms the discarded metal into some startling mechanical imagery. THE SUN WAS HIGH: DIY // Galaxy Jeans I don't want to enter in a "I liked galaxies before it was cool to like them" monologue, but I've always been obsessed with outer space! My brother and I used to visit the local library and borrow tons of books about galaxies, spaceships and planets. The obsession stuck and now, even my design portfolio is filled with space-inspired pieces. There is something so fascinating and mysterious about coloured clouds, planets and stars... Galaxy print clothes have gained phenomenal popularity over the last three years, but oddly enough, they never made it to the racks of affordable chain stores.