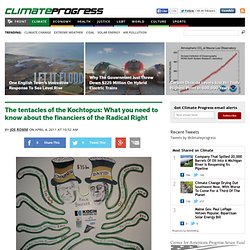 They also fund and help oversee the extremist Tea Party movement. To help understand these agents of disinformation better, CAPAF’s Tony Carrk has put together a 31-page report on them. Here’s his summary: Any attempt to understand the modern conservative movement will eventually lead to billionaire brothers Charles and David Koch. The Koch brothers, leaders of a vast family oil-and-gas conglomerate, use this political network to pursue their right-wing agenda at nearly every level of government. Who's Afraid of the Tea Party? An Interview with Russ Ramsland. Who's Scared of the Tea Party? John McCain took a swipe at the Tea Party on the Senate floor yesterday. Reading from a Wall Street Journal editorial, he denounced those opposed to raising the debt ceiling in the House as "hobbits. " Allowing the economy to collapse would be tantamount to helping reelect President Obama, McCain said, as he echoed the sentiments Sen.

Mitch McConnell expressed a few weeks ago. Movie review: Astroturf Wars. The great thing about social media is that they allow a very small number of people to create a potentially very large movement: those overlapping social circles give even just one or two people a surprising amount of leverage. 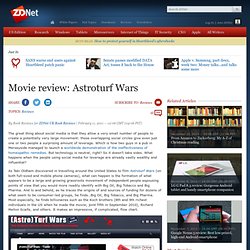 Which is how two guys in a pub in Merseyside managed to launch a worldwide demonstration of the ineffectiveness of homeopathic remedies. (Astro) Turf Wars. Two Santa Clauses or How The Republican Party Has Conned America for Thirty Years. Thom Hartmann - News & info from the #1 progressive radio show. Thom Hartmann. Thomas Carl "Thom" Hartmann (born May 7, 1951) is an American radio host, author, former psychotherapist,[2] entrepreneur, and liberal political commentator. 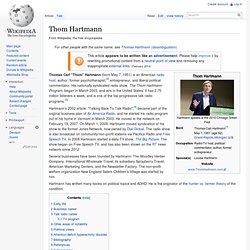 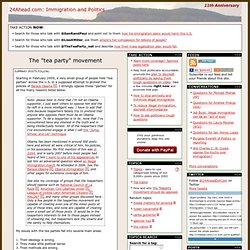 I strongly oppose these "parties" for all the many reasons listed below. Note: please bear in mind that I'm not an Obama supporter, I just want others to oppose him and the far-left in a more intelligent way. I have to add that note because teapartiers falsely triy to pretend that anyone who opposes them must be an Obama supporter. To be a teapartier is to lie; none that I've encountered have any interest in the truth and in being intellectually honest.

Obama has been mentioned in around 500 posts here and almost all were critical of him, his policies, or his associates. See also my coverage of groups that the teapartiers should oppose such as National Council of La Raza, American Civil Liberties Union, League of United Latin American Citizens, MALDEF, and many other groups discussed here. 1. 9. 1. George Monbiot. George Joshua Richard Monbiot (born 27 January 1963) is an English writer, known for his environmental and political activism. 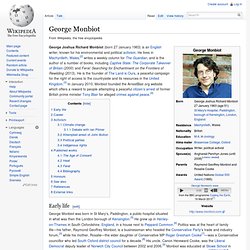 He lives in Machynlleth, Wales,[2] writes a weekly column for The Guardian, and is the author of a number of books, including Captive State: The Corporate Takeover of Britain (2000) and Feral: Searching for Enchantment on the Frontiers of Rewilding (2013). He is the founder of The Land is Ours, a peaceful campaign for the right of access to the countryside and its resources in the United Kingdom.[3] In January 2010, Monbiot founded the ArrestBlair.org website which offers a reward to people attempting a peaceful citizen’s arrest of former British prime minister Tony Blair for alleged crimes against peace.[4] Early life[edit] Career[edit] After graduating in Zoology, he joined the BBC Natural History Unit as a radio producer, making natural history and environmental programmes. 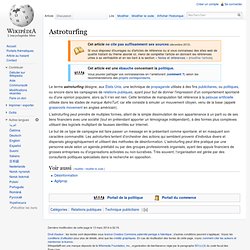 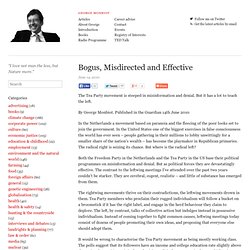 But it has a lot to teach the left. Santelli's Tea Party.