Top conservative looks to shake up RNC. When Republicans gather in Cleveland next month, they won’t face just an intraparty struggle to dump Donald Trump as their party’s nominee in 2016, they’ll face a push from a top conservative looking to reshape the party’s future in 2020 and beyond. 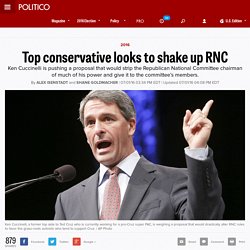 Party Organisation. National versus state versus local party organisation continues to be an issue in American Politics. 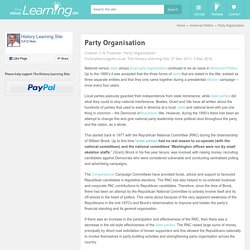 Up to the 1990’s it was accepted that the three forms of party that are stated in the title, existed as three separate entities and that they only came together during a presidential election campaign – once every four years. Local parties jealously guarded their independence from state dominance, while state parties did what they could to stop national interference. Bowles, Grant and Vile have all written about the hundreds of parties that used to exist in America at a local, state and national level with just one thing in common – the Democrat orRepublican title. 2014-03-09. Parties were not mentioned in the constitution of the United States of America; instead they developed as loose coalitions over time, originally centred on key ideas such as federalism and States’ rights. 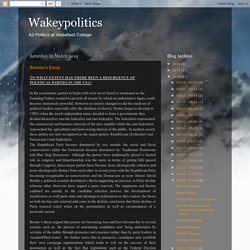 Hamilton expanded the ideas of federalism and what a federalist style government could achieve believing that USA was destined to become a manufacturing powerhouse, to do this he needed a strong centralised government that could invest in infrastructure and protect patents, as well as protect the interests of big businesses. However Jefferson had an opposing view believing that the USA should consist of small subsistence level farmers that had many entrenched rights and chiefly among these rights would be freedom from government intervention, whether that meant having the right to keep and own slaves or simply vote. Barack Obama’s presidency has been a very good thing for Republicans. For the first time since Gallup began measuring party affiliation nationwide, there are now more red states than blue ones. 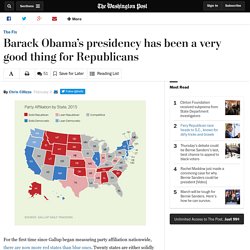 Twenty states are either solidly Republican or leaning Republican, while just 14 are solidly or leaning Democratic. The remaining 16 are competitive between the two parties. "This is the first time in Gallup's eight years of tracking partisanship by state that there have been more Republican than Democratic states," writes Gallup's Jeffrey M. Jones. "It also marks a dramatic shift from 2008, when Democratic strength nationally was its greatest in recent decades. " Campaign 2016 Email Updates Get the biggest election stories in your inbox. You’ve signed up for email updates on this story. Please provide a valid email address. Party Decline v. Party Renewal ~ The Smoke Filled Room. The party's (largely) over.

Party Decline. A lthough the Republic's Founders dreaded the divisiveness of "faction," political parties have proved essential to the promise of American democracy. 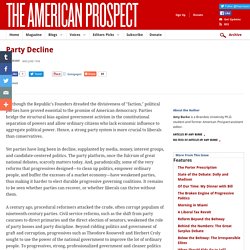 Parties bridge the structural bias against government activism in the constitutional separation of powers and allow ordinary citizens who lack economic influence to aggregate political power. Hence, a strong party system is more crucial to liberals than conservatives. Yet parties have long been in decline, supplanted by media, money, interest groups, and candidate-centered politics.

The party platform, once the fulcrum of great national debates, scarcely matters today. And, paradoxically, some of the very reforms that progressives designed—to clean up politics, empower ordinary people, and buffer the excesses of a market economy—have weakened parties, thus making it harder to elect durable progressive governing coalitions. A century ago, procedural reformers attacked the crude, often corrupt populism of nineteenth-century parties. Party Influence: Decline or Renewal? In the 1990s it was said that parties were in retreat, and that their power and influence would never be what it once was, and would continue to decline. 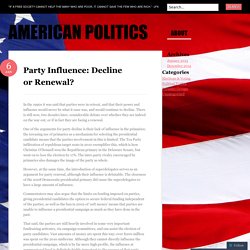 There is still now, two decades later, considerable debate over whether they are indeed on the way out, or if in fact they are facing a renewal. One of the arguments for party decline is their lack of influence in the primaries; the icreasing use of primaries as a mechanism for selecting the presidential candidate means that the parties involvement in this is limited. The Tea Party infiltration of republican target seats in 2010 exemplifies this, which is how Christine O’Donnell won the Republican primary in the Delaware Senate, but went on to lose the election by 17%. Behind John Boehner's crackdown on conservatives - Jake Sherman and Anna Palmer. Voting against John Boehner’s bid for a third term as speaker has been very bad for Rep. 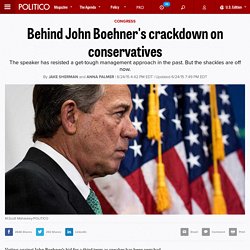 Richard Nugent. The speaker’s friends and aides thought the Florida Republican was a trustworthy ally. Nugent had privately signaled he would vote for the Ohio Republican to remain the GOP leader. Story Continued Below Then he cast a ballot for his fellow Florida Rep. Now Nugent is an outsider. Campaign checks from corporate political action committees have all but dried up.

“It’s been quite a few things,” Nugent, a second-term congressman and former county sheriff, said in a recent interview, referring to the retribution he’s been subject to. For the first time in years, Republican leaders feel they have the political capital to truly fight back against a small group of dissenters within their ranks. Congressional perks must be earned. That’s not all. The attitude, those top Republicans argue, reflects the will of the vast majority of the House Republican Conference. Most notable is Garrett.