Drinkhacker.com - The Essential Blog for the Discriminating Drinker 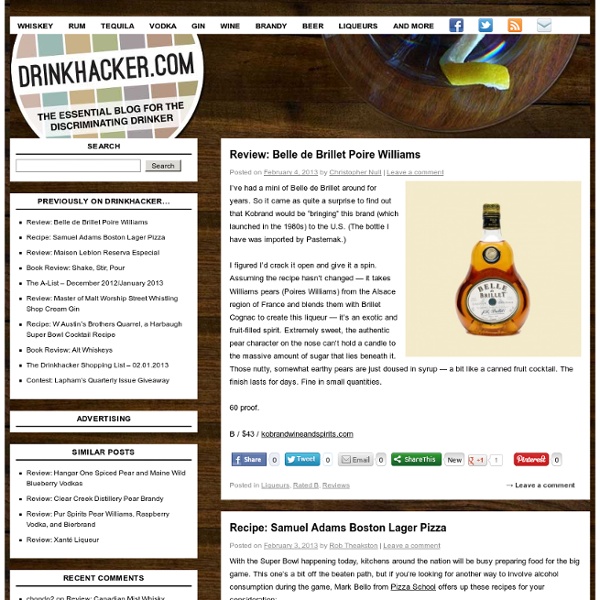 Keeping up with the SMWS is going to be tough, but we’re up to the task. Here are thoughts on the four newest releases from our “secret whisky” friends. This outturn covers the second half of August 2012. – 11 year old Highland Park from Orkney – Very hot HP, at a blazing, cask strength 117.2 proof. Needs copious water to bring out its charms, which are plenty: Tangerines, marshmallows, and modest floral notes are balanced with signature mild peat, chimney smoke, and bacon notes. Young, though, and even at lower alcohol levels, the finish is hot.

52 Really High Quality Free Fonts For Modern And Cool Design I am big fan of typography myself and was surprised I haven’t done any good font collection yet! While doing research I was amazed how many really high quality fonts are available for free. And now with Sifr and similar tools you can use any font in your web-design actually, but if you are graphic designer you get even bigger enjoyment through such detailed and beautiful fonts. Balance between readability, elegance and use fonts with artistic approach to get best out of them, really that’s all you need to do. And by the way I am thinking about inspiring and effective typography article in soon future to show you very best examples – stay with us – get inspired and save your time because research has been done already for you!

Tablas Creek Vineyard Blog By Robert Haas Congratulations to Jean-Pierre and François Perrin, "Men of the Year" in the current issue of the venerable English wine magazine Decanter. I cannot think of any French wine family with better credentials. We love them. My first encounter with the Perrin family was with Jacques in 1967. It was during my short (1967-1970) period at Barton Distilling trying to create a wine division.

Unlocking Sony Ericsson Phones ( step by step guid... Sorry for random spaces I have no idea why they have happened can a mod sort this out please ? thanks ukrides. Ok well I haven't seemed to be able to find on this forum how to unlock Sony ericsson phones. The Feiring Line Impressed by the handling of the Olivier Cousin case, I stopped in to talk lawyer Eric Morain when last in Paris. With a case of Frank Cornelissen 2009s resting against the wall, the avocat sat behind his desk in his art-filled office. His handsome-cherubic face is angled in by a gently silvering beard. Mail constantly beeped into his computer.

Home Brewing Blog by BeerSmith - Making Beer at Home This week we discuss how to keg your home brewed beer with Chris Graham from MoreBeer. I highly recommend watching the video as this week Chris provides a detailed overview on kegging equipment, kegging techniques and how to make the transition from bottles to kegs! Download the MP3 File – Right Click and Save As […] Dry yeast for home brewing is sometimes maligned and often overlooked. Many years ago when I started home brewing, the quality of dry yeast included with many prepackaged kits was poor.

Hungry Crowd Tasting Room Why You Should Drink Portuguese Wine BY Ray Isle | POSTED APRIL 30, 2014 AT 12:00PM EDT Beer Therapy The Brewers Association Board of Directors has approved changes to its statements of purpose, mission, core values and beliefs, as well as its definition of craft brewer. “The changes to fundamental elements of our industry were undertaken with significant deliberation and consideration of many voices,” Paul Gatza, Brewers Association director, said for a press release explaining the changes. “In November 2013, at the board’s direction, the BA surveyed our voting brewery members regarding the ‘foundational documents’ of our association.

Appellation Beer: Celebrating Beer From a Place A quick exchange of comments here Monday provoked this thought from Boak & Bailey about what happens to even the most dominant of breweries over time: Our suspicion is that, of the current wave of new brewers (1970s to now) some will inevitably become the new Whitbreads and Watneys.We don’t see, say, Sierra Nevada going into the Lite Lager business any time soon, but we can imagine, in thirty years time, a business which seems complacent and arrogant, and of which people will say: “They’re so dominant that no-one else can get into the market, and all they produce is that bland, dumbed-down, sub-6% pale ale crap …”If that does happen, there will be plenty of brewers waiting to challenge them, and the cycle will continue. Of course change is inevitable, but is complacency? Five days ago, August Schell Brewing Company, established in 1860 and the second oldest brewery in the country, won two medals at the World Beer Cup. It earned gold for Schell’s Firebrick, a Vienna-style lager.

Write for Wine: It's Wine O'Clock Somewhere! The historic victory was surprising to many, particularly in Europe where the expectation was for a French winner; a fictional version of the amazing event was featured in the 2008 film, Bottle Shock. (Notably, the Paris competition is just one highlight of Chateau Montelena’s rich history.) Winemaker Mike Grgich – who later joined with Austin Hills to establish Grgich Hills – crafted the 1973 Chardonnay, which remains on display at Chateau Montelena’s only satellite tasting room in California, just off the lobby at the Westin St. Francis in San Francisco. The St. Francis was where I happened to be speaking about social media analytics at the Dreamforce 2013 conference last November and, not surprisingly, I was drawn to the tasting room to try the lineup

The Cork Board: The premiere blog of the Napa Valley 11 stunning photos from the 2013 Napa Valley wine grape harvest It’s only early September, but this year’s annual wine grape harvest is already in full swing. There’s a frenetic vibe across the Napa Valley as winemakers, vineyard managers and crews keep close tabs on Brix levels, current temperatures and weather forecasts, among many other things. Below are eleven stunningly gorgeous photos snapped by those on [...]