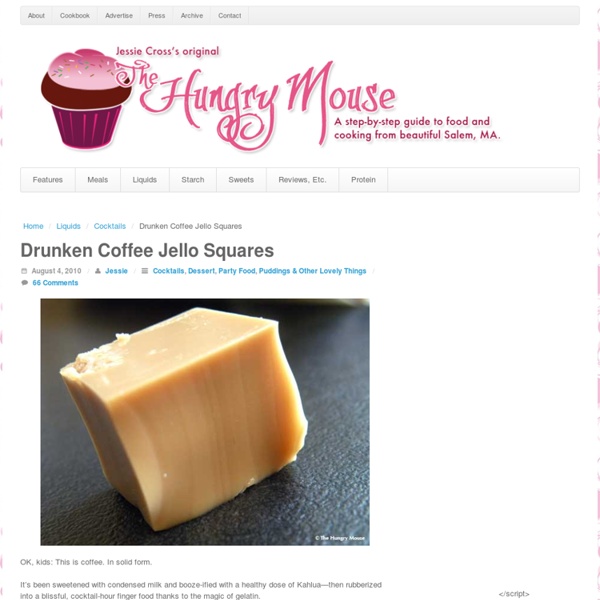 OK, kids: This is coffee. In solid form. It’s been sweetened with condensed milk and booze-ified with a healthy dose of Kahlua—then rubberized into a blissful, cocktail-hour finger food thanks to the magic of gelatin. (If you know me, you know how much I love coffee, so you can imagine how excited I was when I came across the recipe.) Now, you have to like Jello, or Jello-like food, for this to work. If you do, you’re in for a treat. Huge thanks to The Food Librarian for sharing their deliciousness. (If you haven’t checked out the Food Librarian’s blog, you should. So, years ago, I had several meals that ended with Classic American Jello Mold Torture. This is not that jello. This jello is the short and stout cousin of Vietnamese iced coffee, that fabulous concoction of espresso and condensed milk. This is jello that you could serve to your foodie friends. This stuff is silly. The short version of the recipe goes like this That’s it. Read on for step-by-step instrux of what that looks like.

Not so much a recipe… More of a “why have I not been doing this for years?” post. Remember back when I made caramel sauce? For some strange reason, I haven’t made it since then. Syrian Za'atar Recipe Syrian Za'atar Notes My brother is the best cook in the family, and used to travel on business. After his supply of Za'atar (he got on his travels) ran out, I found this recipe and made some for him. He was highly complimentary, claiming it was better than what he had previously.

S'moretini Shooters Me again. Here to convince you that you need yet another trendy, insanely-flavored bottle of booze. I do what I can. I know what you’re thinking. “Does marshmallow vodka really taste that different from that whipped cream vodka you already insisted that I buy? Or how about the cake batter vodka that I went out and bought immediately in order to drink a cake martini for breakfast?” Wedding Trend Watch: {Jelly} Shots If you're looking for a fresh, creatively chic method to serve alcohol at your wedding reception, then I'd like to introduce you to the wonderful world of Jelly Shots. Jelly Shots are classic cocktails translated into gelatin form, i.e. a grown-up version of the Jell-O Shot (sans Dixie cups, of course!). The hallmarks of a Jelly Shot include: a flavor true to the cocktail inspiration and a free-spirited jiggly form that makes them a delight to devour. Below are a few examples from the pros over at the Jelly Shot Test Kitchen. Blackberry Cosmo Jelly Shot, garnished with a paper-thin slice of raw cranberry and a little lime zest. Espresso Martini Jelly Shot

Jello Shots! This Post is ALL Mandi. I think she has had a few of these this morning so disregard her grammar and over excitement. See ya next week! - Dan fried eggplant Jordan 1 large eggplant washed and drained 2 clove garlic, finely minced 1 cup plain yogurt Limoncello Recipe Limoncello While searching for a good recipe for Limoncello, I found a lot of conflicting information. Some recipes use vodka, others use grain alcohol (without specifying the potency, which varies) and others even used rum!

One Hundred and One Mezze: 17. Fried Cauliflower Today's dish is simply deep fried cauliflower. Deep frying vegetables is a unique method of Levantine cuisine ... I wrote the last sentence and immediately realised that it is not that unique. Perfect Iced Coffee Iced coffee is my life. When I wake up, often around the time party animals on the west coast are just heading home, I start each day not with a cup of freshly brewed hot java, but with a tall, blessed glass of creamy iced coffee in a glass. I’ve been an iced coffee freakazoid for years and years. To say I couldn’t live without it is an understatement. It gives me the tools I need to cope. Iced coffee is a complicated thing, and there are many different approaches.

Tabbouleh Much of what gets called Tabbouleh bears little resemblance to what Lebanese Tabbouleh is. When I moved to France and began eating in traditional Lebanese restaurants, I was served bowls heaped with fresh herbs, a few tomato chunks, and very, very few bits of bulgur (cracked wheat.) Unlike what is served as Tabbouleh in many places – which is often a bowl heaped with bulgur with a few tomatoes and bits of parsley and mint flecks in it – the cracked wheat is meant to be more of a garnish, and I’ve come to love traditional Lebanese Tabbouleh, which is a green, herbal salad with a touch of spices. Anissa Helou is a highly acclaimed cookbook author and culinary guide, who I was fortunate to visit the market in Sharjah with, and I asked her to share her recipe for Tabbouleh in this guest post by her. Literally, right after I tossed in the dressing, I could not stop eating it. You will flip out when you try this.