Seamus Milne wouldn't condemn Bin Laden and spoke up for Lee Rigby's killers, TOM RAWSTORNE. From the moment he was appointed, Seumas Milne's ability to grab the limelight — for all the wrong reasons — quickly became apparent. 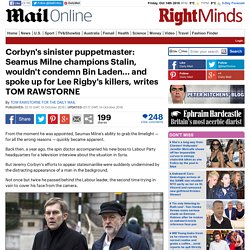 Back then, a year ago, the spin doctor accompanied his new boss to Labour Party headquarters for a television interview about the situation in Syria. But Jeremy Corbyn's efforts to appear statesmanlike were suddenly undermined by the distracting appearance of a man in the background. Not once but twice he passed behind the Labour leader, the second time trying in vain to cover his face from the camera. Like the master he serves, Seumas Milne's core beliefs could hardly be more out of touch with popular opinion At the time, few viewers would have recognised the interloper — Milne. In recent weeks, his interventions have seen him making headlines, rather than shaping them, on an almost daily basis. Turn the clock back to last month's Labour conference. Mr Lewis was said to have been so unhappy at being censored that he punched a wall in anger. Public school? The loony Left is back – but the Tories would be crazy to be complacent.

The loony Left is back – but the Tories would be crazy to be complacent. Behind the charm, Labour's Marxist in chief is a sinister thug...but underestimate John McDonnell at your peril, says GUY ADAMS. Shadow Chancellor John McDonnell, who lists his hobby in Who's Who as 'fermenting [sic] the overthrow of Capitalism', tells Labour's Conference that he plans to chuck £250 billion at a 'National Investment Bank', increase the minimum wage to £10 an hour, and consider a 'universal basic income', under which the Government would give every citizen a free cash hand-out. 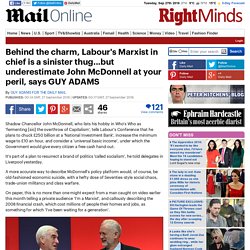 It's part of a plan to resurrect a brand of politics 'called socialism', he told delegates in Liverpool yesterday. A more accurate way to describe McDonnell's policy platform would, of course, be old-fashioned economic suicide, with a hefty dose of Seventies-style social chaos, trade-union militancy and class warfare. How Jeremy Corbyn's followers could seize control of your town hall as early as 2018. David Miliband isn't the messiah who will return to save Labour from Jeremy Corbyn. He's an overrated political failure. Richard Burden. Would Labour's anti-Semtites so freely spout bigotry if they feared the Jews? Labour's deluded Corbynite Twitterati are sealing it off from the electorate. Stephen Glover is disturbed by Jeremy Corbyn's indulgence of terrorists. Jeremy Corbyn’s Shadow Cabinet re-shuffle has been mocked by David Cameron and many pundits. 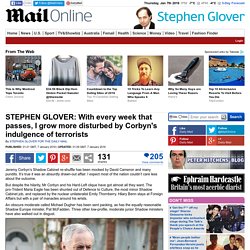 It’s true it was an absurdly drawn-out affair. I expect most of the nation couldn’t care less about the outcome. But despite the hilarity, Mr Corbyn and his Hard-Left clique have got almost all they want. The pro-Trident Maria Eagle has been shunted out of Defence to Culture, the most minor Shadow Cabinet job, and replaced by the nuclear unilateralist Emily Thornberry. Hilary Benn stays at Foreign Affairs but with a pair of manacles around his wrists. An obscure moderate called Michael Dugher has been sent packing, as has the equally reasonable Shadow Europe minister, Pat McFadden. We would be making a serious mistake if we said that the demotion of some shadow ministers, and the dismissal or resignation of others, is unimportant because we have scarcely heard of them.

Mr Corbyn may seem a bumbling, semi-lovable ass who can’t make up his mind. The accepted wisdom is he won’t succeed. Ed Balls has forgotten his role in some of Britain's worst financial disasters. By Alex Brummer for the Daily Mail Published: 01:36 GMT, 5 February 2015 | Updated: 08:47 GMT, 5 February 2015 Frankly, it was an exquisitely embarrassing moment when, on BBC2’s Newsnight, Ed Balls couldn’t remember a single businessman who supports the Labour Party. 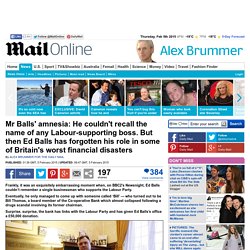 Eventually, he only managed to come up with someone called ‘Bill’ — who turned out to be Bill Thomas, a board member of the Co-operative Bank which almost collapsed following a drugs scandal involving its former chairman. Surprise, surprise, the bank has links with the Labour Party and has given Ed Balls’s office a £50,000 donation. Shadow Chancellor Ed Balls, who failed to remember a single businessman who supports the Labour party when asked on BBC2's Newsnight The Shadow Chancellor’s memory failure follows that of his boss, Ed Miliband, who famously forgot to mention immigration and the national deficit during his party conference speech last autumn.

But Balls is no stranger to amnesia. 1. 2. 3. 4. 5. Euan Blair for Parliament? Labour is more inbred than the North Korean politburo. All hail! 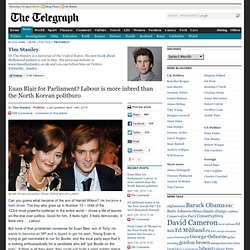 We are not worthy! (Photo: EDDIE MULHOLLAND) Can you guess what became of the son of Harold Wilson? He became a train driver. The boy who grew up in Number 10 – child of the 123rd most powerful politician in the entire world – chose a life of leaves-on-the-line over politics. But none of that proletarian nonsense for Euan Blair, son of Tony. I first thought I’d write this blog as a piece of satire. Miliband's Marxist father and the real reason he wants to drag us back to the nightmare 70s. 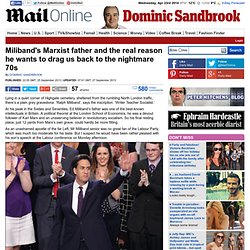 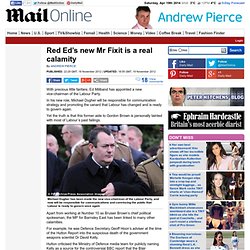 In his new role, Michael Dugher will be responsible for communication strategy and promoting the canard that Labour has changed and is ready to govern again. Yet the truth is that this former aide to Gordon Brown is personally tainted with most of Labour’s past failings. One nation? Hypocritical Red Ed is the most divisive Labour leader for decades. By Stephen Glover PUBLISHED: 22:36 GMT, 3 October 2012 | UPDATED: 13:00 GMT, 4 October 2012 Having been widely derided as aloof and geeky, Ed Miliband has, it seems, with one speech established himself as an exciting Labour leader and a plausible prime minister-in-waiting. 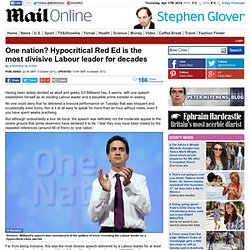 No one could deny that he delivered a bravura performance on Tuesday that was eloquent and occasionally even funny. Nor is it at all easy to speak for more than an hour without notes, even if you have spent weeks practising. Hardly bog standard... Ed Miliband's days at the Eton for lefties. Ed Balls: Hypocrite who dare not tell voters the truth. By Simon Heffer PUBLISHED: 21:54 GMT, 1 October 2012 | UPDATED: 21:54 GMT, 1 October 2012 Which was the more offensive aspect of Ed Balls’s speech to the Labour conference yesterday: his intellectually dishonest prescription for curing the woes of the British economy, or his hypocritical refusal to acknowledge his part in causing them? 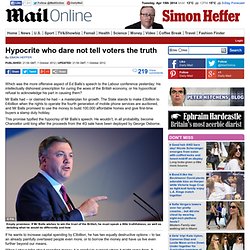